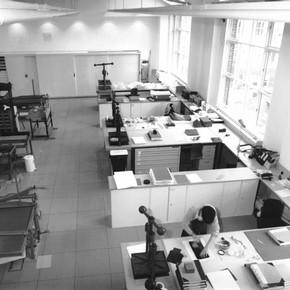 When the Book Conservation Section moved into the new studio on the top floor of the RCA block in December 1995, it converged from four separate workshops, up to two miles apart. Since 1962, the main workshop with most of the equipment had been in a basement with no natural light, next to the Printing section. Through an organic process of pragmatism and practicality, the other workshops had grown in answer to different functions. The studio situated in the National Art Library housed in situ conservation and was sparsely equipped. Its role was to carry out first aid conservation treatments to books which had been identified, through use, as needing repair. There were two workshops at Blythe House in Olympia. One was equipped for phase-box making. The other was set up for long term book conservation projects, firstly the Heals Textile sample books and latterly Charles Dickens' manuscripts. So the section was disparate with the obvious disadvantages of lack of cohesion and daily contact and time wasting in having to transport materials and objects between workshops.

When I became involved in the design of the new book studio in 1992, there were several principles aimed at. Some of these principles were identified by the 'New Accommodation Group' which the Conservation Department established in 1989 to examine the ideals for studios when the project was first mooted. Other aspirations were specific to Book Conservation. 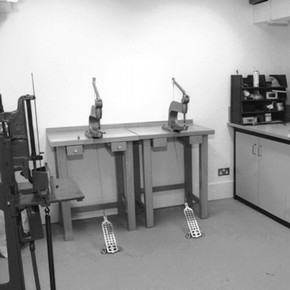 1. To bring all the different book workshops together in one location.
2. To be close to associated sections, namely Paper conservation and the Mountcutters for the sharing of materials (including paper and board), of expertise and equipment. For example, the ultrasonic encapsulator had been a ten minute walk away.
3. To be close to the rest of the Conservation Department, including the library. The book studios were amongst the furthest satellites of the Department.
4. To accommodate seven people; five permanent book conservators, one contract conservator and one MA student. The section had identified and quantified the enormous need the Museum had for the conservation of books, but did not have adequate space or facilities for the planned number of conservators. In addition, although Book Conservation was to have been one of the subjects offered at the beginning of the RCA/V&A Conservation Course, no studentship could be offered due to lack of space.
5. To improve on services and facilities from the previous workshops. For example, the deionised water was a cumbersome, refillable cylinder system. A reverse osmosis system was specified.
6. To improve on known irritants from the previous workshops, such as insufficient leg room to sit at workbenches and computers and insufficient space around equipment.
7. To minimise health and safety risks to people. Vastly improved extraction was incorporated. Layout and storage were designed to minimise handling of heavy board and rolls of cloth.
8. To minimise physical risks to objects. The books would be stored flat in metal drawers with high level security.
9. To incorporate as much flexibility and mobility as possible.
10. To re-examine and improve work practices and use the opportunity of the move to rethink work flow and the functions within the studios rather than blindly emulating what was done before.

The top floor of the RCA block used to be the painting studios of the Royal College of Art. It was a huge double-height space with enormous north and south facing windows. Rather than divide it up into little rooms, the concept was to keep this space as large and clear of divisions as possible, both for a sense of lightness and airiness and for flexibility in the future. Therefore, the principle was to have most of the conservation work being carried out in the main studio and separating out:

Clean, dry and quiet book conservation was to be in the main area. A small workshop was designed for 'dirty' processes such as leather paring, board sanding and tool sharpening. This workshop was equipped with a cabinet maker's bench.

A wet area contains a double heated sink with integral light boxes, an island sink, mobile drying racks, a fume cupboard (for non-aqueous deacidification, retannage of leather and mould removal) and ventilated chemical store. The sinks have laminar flow extraction, so can be used for solvents without cumbersome additional extract. A bench with a chemical resistant surface has plenum slot extract for making up solutions, again without irksome trunking or cabinets. There is a sink for washing glassware in the main workshop and one 'elephant's trunking' extraction, but generally 'wet' and solvent work is in a separate area.

Thirdly, the machinery for boxmaking is housed in a sound-insulated room. These machines, such as the creaser, can be noisy and could not only disturb the rest of the books studio, but the Mountcutters above and the textile curators below. The different processes of box making were studied and could be divided into the quiet and 'noisy' parts. Only the noisy parts are done in a separate area; the rest is on a large worktable with board cutter adjacent to the boxmaking room.

Therefore, these three functions were separated from the main studio, in single height rooms. It was decided not to have a separate materials or object store, as these were in constant use and should be an integral part of the main studio. 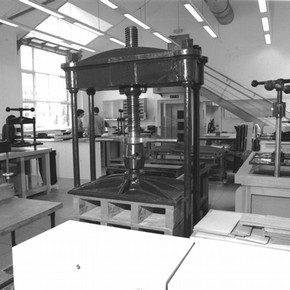 When designing the layout within the main studio, the starting point was to use the north light to best effect. Each of the seven workbenches are at right angles to the windows, with an inset nipping press bench at the other end. Benching under the window is for 'paperwork', as previously benches had also to be used for deskwork, and there is a worktop on top of cupboards behind each person. Consequently each conservator has a 'U' shape of benching.

As mentioned before, flexibility and mobility were aimed at. Everything is the same height (915mm) and wherever feasible, mobile. One of the workbenches (which measure 2400mm x 1090mm) is mobile, as is the 2m2 boxmaking table, so they could be joined together for, amongst other things, 'batch' archive work. There are three mobile light boxes (two A2, one A1) again at the same height as the benches, and mobile trolleys for rolls of materials, including Melinex and polythene. There is also a mobile trolley for pegging out parchment, as well as the two mobile drying trolleys. These latter trolleys were all designed in conjunction with manufacturers, which took a lot of time, but as a general observation, the more the 'end-user' was involved with something, the more successful the result has proved to be.All the mobile furniture has locking castors. The only items we were unable to have on castors were the bench chairs, ironically on the grounds of health and safety. Mobility was a guiding principle, both for future flexibility and for minimising the risks to people and objects. .

General equipment such as laying presses and board cutters are centred in the middle of the room, the floor loading calculations having accounted for, amongst other items, 4 ton standing presses. An area by the door accommodates computers, filing and reference books, with appropriate lower level furniture. The majority of materials are stored in a large 5- bay metal unit. Boxboard is stored at waist height, is decanted into a trolley, moved and then stored vertically. Heavy rolls of linen and cloth are stored at waist height on retractable shelves, as is leather. Great care was taken to design this unit to be inert, as it also incorporates the storage of books and objects. It was required to be dustsealed and to open quietly, as the doors are in constant use. Other areas of the studio are loosely designated for gold tooling and finishing, for photography and examination.

Has it worked? Basically yes. It is beautiful. My two main fears were that firstly there was something glaringly obvious that had been overlooked, and secondly that like some American facilities Jonathan Ashley Smith referred to in his editorial in volume 18 of this journal, there would be a beautiful new 'Marie Célèste' facility with no-one in it. Thankfully neither have materialised so far. There are inevitable snagging and teething problems. The 'move' itself was extremely complex and I must pay tribute to the stamina and good humour of the Books Section. But the basic concept appears to have worked, the benefits of reduced travelling time, of increased sharing of knowledge, ideas and materials have happened. An assessment in a year's time will be an interesting exercise.

In my previous troglodytic existence I looked out onto people's feet and calves for a decade. Now as I'm writing I look out onto a clear blue sky punctuated by a solid, brilliant white '30s apartment block and pierced by a needle-thin golden spire. Ivory-towered eyrie? All I know is that the importance of the working environment is too often undervalued.