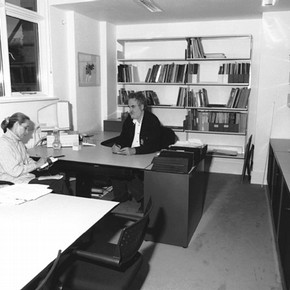 This journal is a celebration of a major move to improve the quality and organisation of the Conservation Department's accommodation. It comes at a time when further management reorganisation is underway (compare the staff chart on the back of this issue with that on last quarter's).

Seen in a historical perspective, the Conservation Department has always been changing and moving. Specialist sections have been created, have flourished independently and then been absorbed into larger groups. As sections have grown they have colonized any available pockets of space at South Kensington and off-site. There has been continuous recognition that these outposts of empire were often totally unsuited to their purpose. They were so widely scattered that management was difficult and communication between conservators and curators severely hampered.

Over the past twenty years there have been at least six plans to rationalise the situation. Perhaps the most unpopular was the proposal to move the whole Department to what is now our major off-site store in West London. Possibly the most exotic plan had the Head of Department's office in the vertex of the central glass pyramid of the roof over what is now the temporary exhibition area.

While these plans lived their short, butterfly-lives, the Conservation Department continued to cast an envious eye on the Royal College of Art paintings studios with their high ceilings and glorious north light. However when it was finally announced that the studios would eventually become vacant, the desire to occupy the space was shared by many more than just the conservators. The idea of rationalising Conservation accommodation by concentrating it in the RCA block was given impetus in a report called 'Towards 2000' written in 1985 by three young curators given the brief to bring radical thought to bear on the future of the Museum's galleries. Further justification was given by Elizabeth Esteve Coll when she gave evidence to the Public Accounts Committee in 1988 following the National Audit Office report on the state of the National Collections. She explained that the conservation backlog could not be solved overnight but needed the initial steps of training the conservators and giving them the space on site to carry out the work.

When the whole scheme is completed there will be space for more conservators, scientists, students and interns. If we ever reach full complement there will still be increased space per person which should lead to greater efficiency. The most important benefit is the geographic consolidation of individual sections and the integration of the whole Department. This geographic integration is important because it improves communication. Planned meetings become easier and the probability of accidental encounters is improved. Many of these chance meetings are more timely and productive than the planned ones. But the benefit of increased contact does not necessarily lie in the content of the information exchanged but in the fact that communication is possible. The new building is the medium and the medium is the message.