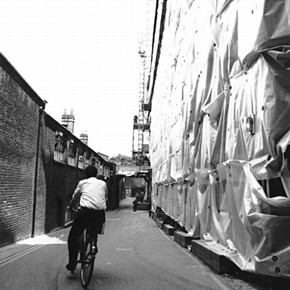 The outside of the RCA block during conversion. Photography by V&A Photographic Studio (click image for larger version)

This issue of the journal is devoted to the new conservation facilities into which half the Conservation Department moved at the end of 1995. The building, originally known as the 'RCA' block as it used to be part of the Royal College of Art, is now called 'The Research and Conservation of Art Centre'. Scheduled over three phases, it will house curators, researchers and conservators.

The design which received government approval in 1992 comprised Paper, Book and Science Conservation, Mountcutting and Administration moving into the RCA building, with Textiles and Sculpture Conservation moving into new purpose-built single height studios on an adjacent site. Together with the Textiles Collection, Records and the Photo Studio, this is Phase I of the project and was completed at the end of 1995. Phase II includes the majority of curators, the Research department and the three MA courses run by the Museum, including the Conservation Course. This has just started. Phase III is the refurbishment of the remaining conservation studios, namely Furniture, Metals, Ceramics and Glass and is currently scheduled to start in October 1998.

There follow several articles on the conservation component of the first phase of this complex building project, which has involved, among others, a V&A project team, architects, structural and service engineers, quantity surveyors, project managers, contractors, specialist advisers (dealing with extraction and the X-ray room) and 'endusers'. The project leader, the architect and the designer have written about the building scheme as a whole and aspects common to all the studios.

A conservator or scientist who has been closely involved with each section in Phase I has written an account of their accommodation from the point of view of enduser. These personal accounts cover the thinking behind the design, the design process, the practicalities of moving and early assessments of what has been achieved. The Conservation Department took the opportunity to examine working practices within all the department, not just in those sections who were moving, and there is a short piece on the aims and outcome of this working group.

In addition to being a major occupant of the building, the Conservation Department played an advisory role over services such as water quality (including levels of acidity and conductivity and materials for pipes), lighting (high frequency, tri-phosphor, fluorescent uv filtered daylight tubes at 500 lux at bench height), glazing (recommending uv absorbing glass rather than uv films which would need replacing), window blinds and wall colours. As well as advising on the materials for use in the fit-out, recommending the minimal use of fibreboards and the use of stove enamelled metal for object store1, the Science Group also undertook the testing of the glass and measuring of light levels.

The importance of project management, consultation, liaison and communication cannot be overemphasised on a project of this scale. The Conservation Department set up its own working party when the scheme first became a possibility to analyse work practices and develop design ideals. Jonathan Ashley-Smith, the head of department, was on the Museum's project team. In the later stages of the project, the department set up a group of endusers who met regularly to pinpoint problems, co-ordinate moving and share very practical information. This group is about to hand on the baton to those conservators engaged in Phase III of the project, namely Furniture, Metals and Ceramics and Glass Conservation. Experience and observations can be passed on, for example, that generally services, particularly extraction, seem to have been some of the most vexed areas. Phase III, which will involve the affected studios moving into temporary accommodation, is scheduled to start in 1998.

Phase I of the project is now in the 'snagging' period; defects are being identified and scheduled for correction. Manuals of the services and equipment are being drawn up, which will include manufacturer's specifications and maintenance schedules. This move has coincided with a lot of other changes in the Museum and the Department, in particular computer networking and the integration of conservation documentation with curatorial information systems. This combination of factors has offered the opportunity to rethink and advance numerous aspects of the Conservation Department.