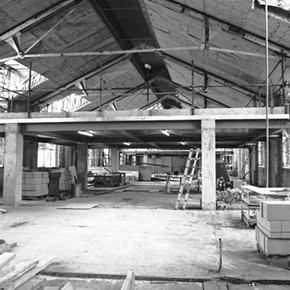 Austin-Smith:Lord were commissioned in 1992 to prepare designs for the conversion of the Royal College of Art Building following a recent masterplan by Michael Hopkins and a number of feasibility studies. The parts of the Museum affected were the North Wing, East Wing and the North Yard, just south of the RCA building. The total area for the RCA Project will amount to 5320m2 .

The aim of the project was to bring together all of the Museum's conservation sections which were widely distributed around the Museum, and the West Kensington and Osterley Park outstations, in a new custom-made facility. The project also involved moving curatorial, research and educational departments, as well as administration offices. It was to be carried out in a rolling programme of three distinct phases. The building is Grade I listed, and English Heritage were involved from the outset.

The first section of the work entailed refurbishment of the North Wing. Subject to budget, the Museum wished to maximise the potential area available. A strategy was developed, supported by English Heritage, to insert mezzanines in the RCA building (Figure 1), increasing the amount of usable space and increasing the internal area by 50%. A new building in the north yard added a futher 580m2 .

The North Wing, built in 1862, was still very much as described at the time. Load bearing brickwork skin and cast iron columns supporting wrought iron beams with concrete floors. The pitched roof was formed by trusses, timber rafters and wrought iron ties with cast iron connections, surmounted by the ventilating lantern. The large windows, facing north and south, afford high levels of natural light and make the spaces ideal for conservation work. The windows (up to 6m by 3m) had been much altered and the roof was in such a bad state of repair that daylight was visible from within. 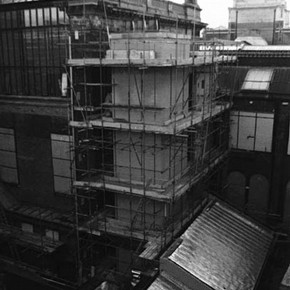 English Heritage required the retention of the exposed wrought iron beams and these, together with the column heads, were treated with intumescent (fire-protectant) paint to give them the required fire resistance. The columns were encased in concrete which not only gave them adequate fire resistance, but also stiffened and strengthened them to support the new loads imposed by the new mezzanines inserted between the floors.

Originally it had been proposed to underpin the columns, thereby increasing their load bearing capacity, whilst reconstructing the ground floor slab at a lower level. However the discovery of mosaics, which formed the flooring of the cloisters, resulted in the underpinning of the column bases with a grid of mini bored piles through the mosaic. The mosaics were recorded; since they were incomplete, and of modest quality, the Museum decided that they should be protected and covered by new floor finishes.

The windows were remade to the original pattern, but with concessions to modern standards and the requirements of the Museum. The glazing units were specially manufactured by Pilkingtons and incorporated uv absorbing glass.

It had been intended originally to clean the brick work but, on the advice of English Heritage, only a limited process of repair and lime mortar repointing was carried out. The whole façade was washed in a soot/water emulsion to conceal the effects of the many repairs and alterations in the brickwork since 1863. A new insulated roof deck was constructed with Welsh slate and lead work, with a continuous louvred lantern at the ridge to match the original.

With the agreement of English Heritage and the Museum, all the new interventions in the North Wing were to be modern rather than pastiche. In the conservation studios all of the mechanical ventilation systems, the specialist extracts, lighting, cable trays and conduits and the emergency systems are fully exposed and carefully co-ordinated with the roof trusses and structure. 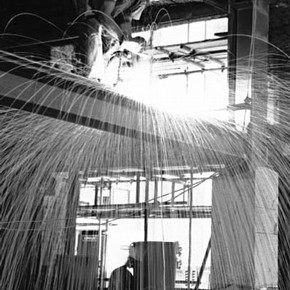 Outbuildings in the North Yard were demolished and a new single story, double height, studio was constructed. A new stair and lift tower (Figure 2) has been created to provide easy disabled access to the lecture theatre and for students attending the courses run jointly by the RCA and the V&A.

The layout for each studio and laboratory took into account the re-use of existing equipment, working practices, specialist extraction, the supply of specialist gasses, reverse osmosis water, task lighting, black out facilities and smoke and fire detection systems. Finishes to benches and floor are resistant to mechanical and chemical damage, surface textures and colours designed to minimise glare colour cast and reflection. Floors in conservation areas are generally finished in robust vinyl sheet, with a non-slip finish.

The curatorial and administrative offices are fitted with heavy duty carpet tile of low electrostatic properties. The first section of the RCA project was completed and occupied by Christmas 1995. Work continues in the South Wing and the refurbishment of the West Wing is to commence shortly.