Time for a Change - The New Paper Conservation Studios 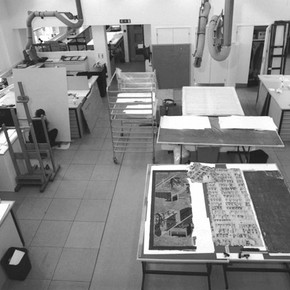 The School of Painting vacated its studios in the old Royal College of Art in 1991. Shortly after, pending the refurbishment of the building, Paper Conservation had the opportunity to make a temporary work space in the building for two students specialising in wallpaper conservation. The extra space was marvellous; we were able to treat large format objects and decide what types of furniture and features would work well in a new studio. We appreciated the creative atmosphere which still hovered between the historic, paint-daubed walls and while we were sorry to see this go, the transformation of the building's interior into light, spacious studios and offices is spectacular. The best feature of the old building - the north and south light sources - has been retained and a new atmosphere is evolving as people get to know the building.

Papering Over the Cracks

The old studio had been filled with large benches, tables and a wash table which were necessary for treating large, two dimensional works of art. However, the room's restrictive size, access and wedge shape dictated the size and quantity of work that could be treated. Some of the furniture was on wheels but the limited floor space did not allow much flexibility and the furniture had not been designed to fold away.

With such cramped conditions in the old room, functional work areas such as a wet area and a drying area overlapped and were not clearly defined. While staff juggled and made do, it had become difficult to initiate students and interns in good working practices without the proper space and equipment.

Access to the new space is good, having both stairs and a goods lift in which large objects and trolleys of work can be delivered directly into the main Paper Conservation studio. There are two smaller studios off this main area for the treatment of objects which are particularly fragile and require a more controlled environment. One of these rooms is used for the treatment of photographs and miniature portrait paintings and the other for the treatment of oriental objects, including scrolls. The Conservation Mounters occupy most of the mezzanine above the main paper studio, enabling objects to be mounted after treatment without having to leave the room. All these sections have full access to the space and equipment.

In the new studio there was sufficient room to allocate space to specific functions so that there are now clearly defined areas for encapsulating, washing or pressing objects. As the project proceeded, some of the original plans had to be adjusted as space was lost to plant rooms, service trunking and 'phantom' measurements. The resulting restricted access to some areas meant that in retrospect, some facilities such as the materials store and wet area may have been better sited elsewhere. A three dimensional model of the building would have been very useful in determining the ergonomics of the space allocated to Paper and Books.

Designing the Furniture and Equipment 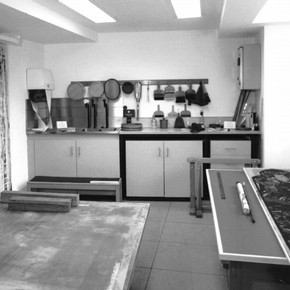 In the new studio it was decided to keep the fixed furniture to a minimum: side benching running the full length of the external walls. To that are butted workstations, some of which are on wheels and others which form static islands. If necessary all these workstations can be resited. In addition in the large central floor space, worktops on trestles can be clustered in various configurations and mobile equipment, such as the vacuum suction table, can be wheeled in. By being able to completely clear the central space the floor can be used as a work surface on which to treat oversized objects such as large cartoons, wallpapers and billboard posters. Part of the specification for the floor was that it should be able to tolerate water treatments and have a continuous smooth surface. Because it is a raised floor with services running underneath, a compromise had to be made on the size of the area and the working procedure when the floor is used for washing objects.

For the trestles, a range of lightweight portable worktops have been made to standardised sizes which match the size of the kari bari (oriental drying boards) which are too are often placed on trestles. The standardisation of the sizes allow the worktops to be stored vertically in the same storage systems designed for the kari bari, namely channels mounted in the floor and in the ceiling. The sizes also reflect average sizes of Museum objects such as posters and have been designed to make handling easier, in terms of arm span and weight. Having learnt from the Chinese mounters that a lacquer-red surface is easier on the eye when de-backing paper objects, each worktop was made with one red surface. An unvarnished wooden trim on all the worktops provides a pasting surface and securing strip for staples and tapes when the objects are being treated. In order to ensure the worktops were light and yet rigid, it was specified that either Ciba Geigy AerolamTM or AerowebTM honeycomb ranges were used in their construction.

Storage units were designed to accommodate drying boards, worktops and frames in a vertical position. Two banks of removable round sectioned metal uprights, the ends of which are located into a line of recesses in the floor and ceiling at 3-5cm intervals, form fully adjustable bays into which boards can be placed. By removing the uprights on one side of a stored frame it is possible to walk into the storage space to lift a frame if necessary.

Flexibility in the use of furniture included designing lightweight lids for fixed items, such as the sinks and laminar flow extraction bench, so that they could convert to work surfaces when necessary. The lids can also be used as work surfaces on trestles when the sinks are in use.

There have been some very definite pluses and minuses to the project. Major lessons learnt during the project were that there are no second chances and it is never too early to question plans for the siting of the services such as water and power. An example of this is the main water supply to the building which should ideally be outside and at low level and not, as has happened, inside and at high level.

Liaison and communication are key elements in developing a building such as this, both between the various elements of the project and within the Conservation Department. Towards the end of the project, the endusers met regularly to pinpoint, compare and sort out common problems. As the enduser representative for the various sections in Paper Conservation, I found this group very helpful and through it was able to communicate more positively with the Project Team.

It was important to oversee and insist on good drawings for every bit of specialist furniture and equipment, especially if more than one manufacturer was involved in making an item. Poor drawings for the laminar flow bench in the wet area has resulted in major misunderstandings, leaving the bench unusable at present. However, a tight specification on the sinks in the wet area ensured we had the leeway to have them corrected when they were built contrary to the specification, otherwise we would have had standard sloping sinks again which for years before had made it difficult to float-wash objects evenly.

After years of 'making do' one of the more difficult things was to cultivate a breadth of vision to incorporate future working procedures and break old work habits. In trying to achieve an open plan area, we had to balance the flexible use of as much of the space as possible with a need for the individual's space required in which to concentrate. Removable low level screens were installed between workbenches where work areas felt exposed and were removed from between butted workstations where the full double width of the table was more important. Telephone extensions were equipped with answering systems to encourage the ringing tone to be switched off when concentration is needed. Staff also have access to quiet office areas and a library within the building. 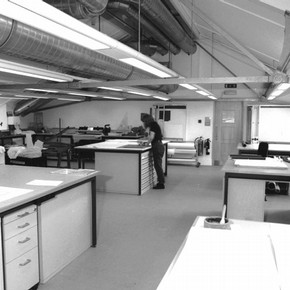 Moving into the new space has generated opportunities to reappraise and improve equipment and working procedures from a Health and Safety angle. Many unnecessary chemicals and potentially hazardous pieces of equipment were safely disposed of before the move.

The vastly improved storage space for museum objects allows a more effective flow of work through the room because there is now room to store objects for an entire exhibition rather than have deliveries staggered.

The drawing together of the paper-related sections (Paper Conservation, Photograph and Miniature Conservation, Oriental Conservation and Conservation Mounting) adjacent to Book Conservation has resulted in improved communication and for conservators working in situ in the collections, there is now the room to give them a base in the Section, with better opportunities for training and a sense of involvement within the Group. The extra space also enables us to offer studentships and placements for established conservators. With all the sections together it is now feasible to channel the unavoidable waste of high quality card and paper offcuts into a recycling programme to a level which generates some funding for the Museum.

The atmosphere and light is good for working on paper; the high frequency strip lighting and the option to use the more directional louvred natural light from both the north or south windows prevents the usual eye strain caused by glare as light bounces from paper. The light, softly coloured floors and work surfaces are easy to keep clean and it is planned that there will be an annual deep clean and high level clean of the studios to coincide with the curatorial departments' annual stock take.

The architects have created an impressive space considering the complex range of activities and interactions the Paper Sections undertake and unlike hospitals or many industrial sites, we do not always have clearly defined requirements which are published and recognisable to architects and the construction industry. Generally the working environment is safer, more pleasant, cleaner, roomier and a more efficient space to work in. It was interesting to note that shortly after occupying the space every single work surface was in use and yet space could still be generated (by using the plan press storage or by extending one of the tables with trestles and a portable worktop).