Milk and Modernism: Conservation of a Smoker's Cabinet designed by Charles Rennie Mackintosh 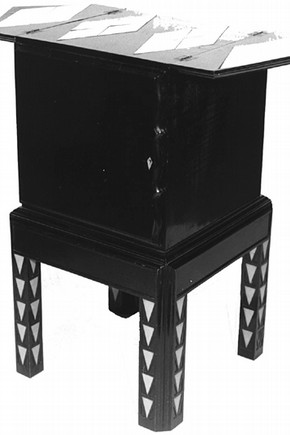 The cabinet (Museum No. Circ. 856 1956), (Figure 1) was designed by Mackintosh for 78 Derngate, Northampton, Bassett-Lowke's commission of 1916. It measures 590cm high, 584cm wide with the flaps open and 330cm deep. The aesthetic impact of the piece relies on the use of startling yellow geometric inlay on a black background, a result of Basset-Lowke being colour-blind to all but yellow. The only disharmony is the incorporation of decorative curves on the leading edge of the door on a cabinet which is otherwise characterised by simple mouldings and straight lines. Such quirks are not unusual in Mackintosh's designs, and the cabinet testifies to the quest in the early twentieth century for designers to find a furniture style which would express the essence of the new century rather than referring to the old.

The smoker's cabinet, along with other objects by the same designer, was to be conserved prior to loan for an exhibition which commenced in April 1996 in Glasgow before travelling to the USA.

Treatment records for the cabinet consisted of a comprehensive condition report prepared in 1986 when the cabinet was cleaned and the inlay reattached. Although there are no other records of treatment at the Museum since its acquisition in 1956, evidence of intervention which predates 1986 can be found in Billcliffe's monograph of 1979  1  where replacement inlay on the legs is clearly visible in a large colour photograph of the cabinet.

Although the primary challenge was the conservation of the decorative inlay there were some other minor problems with the construction of the cabinet. Splits in the butted mitre-joints at the rear of the cabinet were secured with balsa fillets which were coloured out with black shellac, isolated from the original by Paraloid B72TM (Rohm & Haas Co.). The surface finish was blistered and disfigured on the proper left hand side, possibly as a result of exposure to heat. No treatment was undertaken on this because it would have involved the removal of about 20% of the original and although the blistering is particularly noticeable in raking light, it is unlikely to be obtrusive under gallery conditions.

When undertaking conservation of plastics it is essential to identify at least the base polymer of which they are composed as this will determine the nature and extent of any treatment. This is comparatively easy with early plastics but becomes progressively more difficult as more sophisticated blending of polymers occurred in the last quarter of this century. A range of analytical techniques may be required to identify other components such as plasticisers, stabilisers, fillers and colorants should this be necessary.

Although the yellow inlay on the smoker's cabinet is described as ErinoidTM (Erinoid) in the curatorial records, the nature of this material was initially unclear. Brenda Keneghan, Plastics Conservator at the V&A, took samples of the original inlay, the replacement inlay and the original adhesive for analysis using Fourier Transform Infrared Spectroscopy (FTIR). Samples were obtained by removing loose inlay. The edge of the inlay was gently rubbed with a silicone carbide disc to collect a small amount of fine powder. The spectra resulting from the analysis of this powder were matched with spectra from known samples to give the following results: the original inlay proved to be casein; the replacement inlay poly(methyl methacrylate) - PMMA or PerspexTM (ICI); and the original adhesive was animal glue.

Casein is most commonly found as an adhesive and has been utilised in this way for centuries. Casein, derived from goat's milk, was used as an adhesive by the ancient Egyptians and casein adhesives are still manufactured today. 2  It was not until 1899 that a patent was registered in Germany for the production of casein plastic (an apocryphal tale of its discovery involves a cat, a dish of milk and a spilt bottle of formaldehyde) and it was originally manufactured there under the trade name Galalith. 3

Mackintosh first used casein-based plastic in the Chinese Room at the Ingram Street Tea Rooms in Glasgow in 1911. 4  Although importation of Galalith ceased with the outbreak of war in 1914, the establishment of the Erinoid company in Gloucestershire the same year ensured that casein plastics, widely known as Erinoid, remained available in Britain.

Casein is a phosphoprotein complex precipitated from skimmed milk by acidification. The precipitate produced in this way is insoluble in water, alcohol and other organic solvents, but a colloidal suspension can be created in alkaline conditions. Traditionally this was done using slaked lime, although ammonia is generally used in modern production. 5 The casein film produced, either as adhesive layer or plastic, is neither thermosetting nor thermoplastic and is hard, brittle, and insoluble. It is hygroscopic, a characteristic which prevented exterior use, though wartime research was reported to have produced a casein adhesive which was 'waterproof, uniform and reliable'. 6

The main use of casein plastic was in the manufacture of buttons and small decorative objects such as boxes and combs. It could be produced in delicate pastel shades and, owing to its capacity to absorb acid dyes easily and uniformly, could be produced in an almost infinite range of colours and tones, including pearly effects.

Flat sheets - such as those used by Mackintosh on the smokers cabinet - were manufactured by first extruding rods, cutting them into strips or nibs and placing them in large presses for compression-moulding into sheets. The sheets were then immersed in a 5% formaldehyde solution making them hard and insoluble in acid and water. They were then dried to reduce the moisture content to about 10%. The long soaking in formaldehyde followed by a long drying process meant that the sheets were often distorted at the end of this procedure so they were re-flattened by hot pressing, then machined and polished by dipping them in hypochlorite.  7  Machining marks are sometimes visible through the resultant glaze, as is the case with the inlay on the smoker's cabinet.

Water in the casein polymer acts as a plasticiser and its gradual loss causes shrinkage and embrittlement of the plastic. Absorption and desorption of water through cycles of changing relative humidity can cause crazing of the surface which can propagate through the material, particularly where the surface has been scratched or has aged and oxidised. 8  In less extreme cases the casein curls and buckles, as is the case on the Mackintosh cabinet.

Casein Inlay on the Smoker's Cabinet 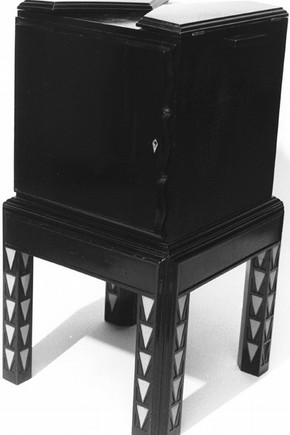 Figure 2. The smoker's cabinet before conservation, with the flaps closed (click image for larger version)

All loose inlay on the legs was lifted, the old animal glue removed and the surface cleaned with a slightly damp cotton bud before being relaid. Because producing a sheet of colour-matched casein to replace the losses would be both time consuming and impractical, a substitute was needed. After consulting the materials library at the Royal College of Art, four shades of yellow PerspexTM (ICI) and one of PlexiglassTM (Rohm), both trade names for PMMA, were selected to replace the casein inlay lost from the legs. The Plexiglass turned out to have a textured surface and was therefore abandoned as a substitute. As the minimum thickness of the available Perspex was 3mm and the original inlay was 1-1.2mm thick, the Perspex was hand sawn to the required thickness and then scraped smooth to remove the saw marks which were visible through the plastic.

Thinning the Perspex made this previously opaque material translucent. It therefore required a second layer of colour to be added to achieve a closer match to the original inlay. A laminated structure of Perspex, adhesive (Beva 371 impregnated film), acrylic paint on hand made paper and adhesive (fish glue) on the substrate wood was used to achieve this.

This laminate was substituted for the five earlier replacements as well as the four losses. Leaving the old restorations would have resulted in one face of one leg having three differing shades of yellow inlay - the top two triangles being original, with a new replacement sandwiched between two old restorations below. The new replacements achieved a closer and far more unobtrusive colour match with the original casein inlay than had been achieved in the past.

Excess poly(vinyl acetate) adhesive (PVAc) around the diamond inlay on the proper left flap attests to a previous, unsuccessful, attempt to flatten and secure the buckling inlay. The alignment of the diamonds has suffered with an unsightly PVAc filled gap between diamonds and veneer down one side. Simply cramping and gluing the inlay down in this way introduces stress into the body of the material and the adhesive and, if the adhesive is stronger than the cohesive strength of the inlay, it will cause the already brittle casein to crack. An alternative, and potentially less damaging, solution was required.

The casein inlay on the smoker's cabinet had buckled and curled due, in part, to unequal moisture loss from upper and lower surfaces. This would suggest that humidifying the casein might be an option. Research on similar samples of casein would be necessary before such treatment could be undertaken since the central aesthetic role of the original inlay on the cabinet would rule out its use in preliminary testing.

Since the priority for this treatment was to prevent damage to unattached and exposed corners, it was decided that the inlay should be secured and supported in its curled state. Only the diamonds on the proper right top of the cabinet were loose enough to require lifting. Balsa thin enough to follow the curved profile of the diamonds was glued to the underside and planed to provide a flat surface for securing them to the cabinet. Balsa was used as it has comparatively small dimensional movement in response to fluctuations in relative humidity due to its low density. This imperfect solution to the problem can be easily reversed in the future should a better treatment be found.

For a furniture conservator whose past experience has focused on problems of construction and traditional surface decoration and finishes, the inlay of the cabinet presented an interesting opportunity for research and a conservation challenge. Since a stock of Erinoid was not available, nor easily made, replacement with a stable modern plastic presented a reasonable alternative. Although direct substitution using Perspex was not possible, the laminated structure of the inlay replacements solved the problems of translucence and colour matching.

Casein plastic is a very unusual material to find incorporated into a piece of furniture - similarly, in the wider context of literature about plastics, casein usually merits only a passing reference. The growing interest in the technical and historical development of plastics may yet produce a more detailed picture of the structure and degradation of casein to provide information about the future conservation of this material.