Plastics? Not in My Collection 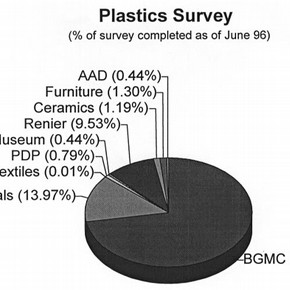 The Victoria & Albert Museum appointed its first plastics conservator in 1992 with the brief of surveying all the plastic objects within the collections. This mammoth task was started by Dr Edward Then and he reported his progress in an earlier edition of this journal 1 . For the last two and a half years I have been continuing the project and as the person actually undertaking the survey I have come across very many interesting and unusual objects ranging from Cross-eyed Critters in the Renier Collection at Bethnal Green Museum of Childhood to chairs made from recycled plastic detergent bottles in the Furniture & Woodwork Collection, not forgetting such exotica as the stage fans of Beatrice Lillie and the sunglasses of Elton John at the Theatre Museum.

I have also come across interesting and unusual attitudes to the survey, the most common of which I have christened 'plastics denial syndrome', where those in charge will swear blind that there are no plastic objects in their collection and are absolutely astonished when a hidden câche is uncovered. I have attributed this syndrome to the probability that most people mistakenly associate plastics solely with modern living, bearing little relation to the past. Museum collections reflect society throughout history, however, and are influenced by both the fashion and materials technology of the day. As material culture has developed over the last two centuries, a much wider range of objects has been collected and synthetic materials have featured prominently. If we begin with the semi-synthetics, such as cellulose nitrate, we can say that plastics have been around for approximately a century and a half. On this basis it would be unusual if any collection contained no plastics.

I would estimate that about 60% of the survey has been completed, but in some collections, including Textiles & Dress and Furniture & Woodwork, only preliminary data gathering has been achieved. It is intended to undertake in-depth surveys of both these collections in the near future and Roger Griffith, a student on the RCA/V&A Conservation Course, will collaborate on the survey of plastic furniture. Over eight thousand objects have been surveyed from other collections including Bethnal Green Museum of Childhood, the Renier Collection (at BGMC), Furniture & Woodwork, Metalwork, Ceramics, the Archive of Art & Design, Prints and Drawings (PDP) and the Theatre Museum. The breakdown of this data is illustrated in figure 1. It can be seen that BGMC, with its vast toy collection, accounts for almost 70% of the objects surveyed up to now. A separate collection at BGMC, comprising of children's books, has an associated collection of objects relating to children, many of which are plastic. The figure of 13.5% for the Metalwork Collection, which makes it the second largest component of the survey, needs some explanation. The figure which represents over one thousand objects is entirely due to a collection of plastic jewellery donated in the mid 1970s. The Prints and Drawings Collection encompasses quite a wide variety of objects from Bridget Reilly screen prints on polymethyl methacrylate (PMMA) to carrier bags from HarrodsTM . Also included in PDP's figure is a large collection of packaging ranging from 'eco-friendly' shampoo bottles to the enclosures for vinyl records, audio cassettes and compact discs. 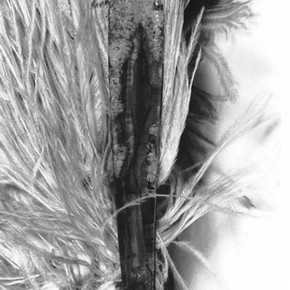 The results of the survey indicate that although the majority of the objects are in a stable condition, the greatest problem being surface dirt and minor abrasions, there are serious problems with individual plastic materials and these recur regardless of what form the object takes. The polymeric materials giving most cause for concern are:

1. Natural rubber. Figure 2 shows 'Bendy Bunny Bengy', (Museum No. Misc.120-1988), a flexible toy made from natural rubber by Bendy Toys in 1951. The rubber has become dry and brittle and crumbles on touch due to oxidation. Natural rubber such as cushioning and textiles in other areas of the collections has undergone similar deterioration.

2. Cellulose nitrate and cellulose acetate. These semi-synthetic materials have been used in a diverse range of applications from mock silk and imitation tortoiseshell haberdashery, to cinema and photographic film. They are inherently unstable and degrade with the subsequent formation of acidic vapours which can cause the disintegration of neighbouring objects. Cellulose nitrate, also known as CelluloidTM (Celluloid Co.), was first produced in the middle of the last century by the nitration of the natural polymer cellulose in the form of cotton. The spontaneous ignition of the material proved to be a problem and stories abound of billiard balls exploding on impact, not to mention the music hall suggestion of eliminating mothers-in-law by lighting up cigars near their Chardonnet silk evening dresses. The problem of flammability was only overcome by replacement with the related material cellulose acetate, which had a low combustibility. Cellulose acetate was not produced on an industrial scale until the mid-1920s. Deteriorating cellulose acetate can generally be distinguished from nitrate by the distinctive aroma of vinegar surrounding the object, as acetic acid is emitted as degradation proceeds. 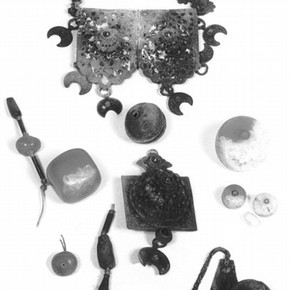 Figures 3 and 4 illustrate the degradation of cellulose nitrate objects in the Theatre Museum collection. The handle of the Beatrice Lillie fan (Museum No. S327-1979) (figure 3) shows behaviour typical of cellulose nitrate degradation with the material becoming crystalline and opaque. The object illustrated in figure 4, also from the Theatre Museum collection, is a badly degraded cellulose nitrate necklace from the 1922 stage production of Chu Chin Chow. In this case the acidic vapour formed on degradation has caused the textile thread holding the beads to disintegrate completely. A metal component of the necklace has also been attacked, resulting in a bright blue corrosion product.

3. Polyvinyl chloride. Polyvinyl chloride (PVC) was commercially introduced around 1935 and is probably the most adaptable of the synthetic polymers. More than any other polymer it has benefited from the use of additives especially plasticisers and stabilisers, which has given it light and heat stability, and enabled it to be produced with various degrees of flexibility. Loss of plasticiser and darkening in colour are two indications of PVC deterioration and both are visible in figure 5. This doll from BGMC (Museum No. Misc. 98-1987) is extremely sticky where the plasticiser has migrated to the surface and has attracted dust and dirt. Darkening has occurred to the head and limbs where the object was uncovered. This darkening is the result of conjugated double bonds produced either thermally or photochemically and is accompanied by the evolution of hydrogen chloride. 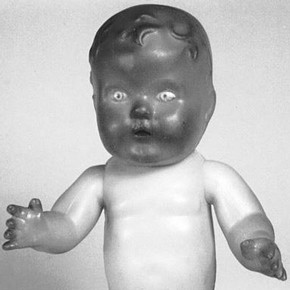 4. Polyurethane foams. The major applications of polyurethane foams are furniture cushioning, mattresses, textiles, carpets, packaging, insulation, toys and sporting goods. Among museum collections they feature predominantly as toys, cushioning and textiles. Figure 6 shows a foam figure of the children's storybook character 'Larry the Lamb' (Museum No. Misc. 97(1)-1978). This figure is one of a set of thirty three polyurethane foam puppets which are in the BGMC collection. These puppets were the stars of the Thames Television series 'Larry the Lamb in Toytown', broadcast in the early 1970s. Several of the puppets are on display in their own case at BGMC and, as figure 6 demonstrates, the foam is literally falling apart. When the case is opened there is an unidentifiable pungent odour 2 . More figures are in storage and any handling produces detachment of the exterior foam as a powder. Oxidation has been confirmed as the cause of this severe deterioration of the polyurethane by analysis of the air in the case. This type of degradation has also been encountered in cushions, toys and other objects made from expanded polyurethane. 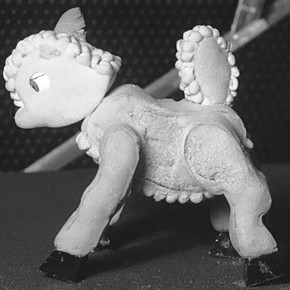 Andy Warhol is reported to have said in the 60s 'It's not fake anything, it's real plastic', thus resolving the imitation/reality argument 3 . Glamorised by the space programme, synthetics took on an air of enchantment, with fashions for foam houses and beanbag chairs made of vinyl. Plastic is now a material in its own right, very popular with contemporary artists and designers. Since the Museum's current collections policy dictates that 50% of all new acquisitions be contemporary, a conservative estimate would indicate that at least half of these objects will contain a substantial plastic component of some kind 4 . The collection will, therefore, contain more and more objects with shorter life expectancies. It is not all doom and gloom, however, as by the implementation of preventive conservation measures, the lifetimes of these materials may be extended significantly, but not indefinitely.