Two Pooped-out Pop Chairs: What is the Future for our Plastic Collections? 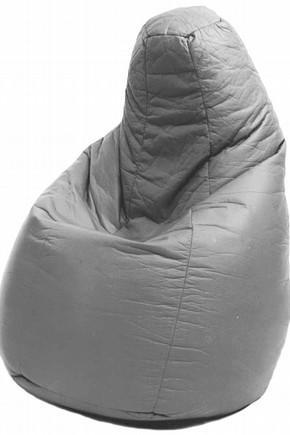 One of the greatest challenges facing the conservator today is how to deal with modern materials. Modern materials have become increasingly important in museum collections and the Victoria and Albert Museum is no exception. The composition of these artefacts is becoming increasingly diverse; although often unknown, they include such materials as rubber, plastics, lacquers and varnishes, metals and numerous composites. These complex materials present new challenges to conservators. Research is urgently required to address the ethical and physical problems of display, storage and treatment.

While conducting a pilot survey of the Twentieth Century Furniture Collection at the V&A, I was presented with two chairs which were good examples of the extreme degradation modern materials undergo in a relatively short span of time. The chairs, made of different materials, had degraded in less than thirty years. They were purchased by the museum in 1970 for an exhibition, 'Modern Chairs: 1918-1970', held at the Whitechapel Art Gallery. At the close of the exhibition the chairs were then added to the Furniture & Woodwork Collection, and displayed in the Twentieth Century Galleries. Since the mid-1980s, however, the chairs have not been exhibited due to their state of deterioration. 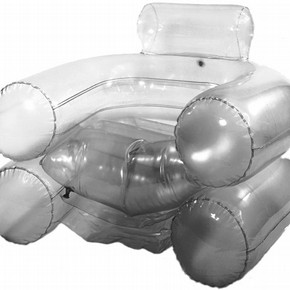 Sacco (CIRC. 73-1970) (Figure 1) - variously known as the Bean Bag Chair, the Chair of 1001 Nights (1000 positions by day, one position by night), or the anatomic chair - was designed in 1968 by the team of Italian designers Piero Gatti, Cesare Paolini, and Franco Teodoro. Sacco has no fixed form. Its loose filling allows it to take on any shape, including a stool, an easy chair, or even a chaise longue. It is lightweight and therefore extremely mobile. The Sacco is constructed of 'skinflex', a faux-leather cover made of polyurethane and filled with tiny spherical white particles of expanded polystyrene. The design of this chair helped to establish the Italians as leading designers of modern furniture during the sixties and seventies.

Also designed by a team of Italian designers, Gionatan de Pas, Donato D'Urbino, Paolo Lomazzi and Carla Scolari in 1967, was Blow (CIRC.100-1970) (Figure 2). Blow was the first piece of inflatable living room furniture to be successfully mass-produced. Blow adopted the construction principle of the inflatable raft. This armchair was constructed of PVC (polyvinyl chloride) which required the development of high frequency welding technology. The chair is inflated through a valve at the centre of the back; the separate seat cushion has it own valve and fits into the chair on a membrane to form the seat. Another membrane lies across the underneath of the seat, for additional stability. The quality of transparency and transience of Blow contrasted with traditional values of solidity and permanence; its portability made the chair ideal for the informal lifestyle of the youth market that was developing in the 1960s.  1 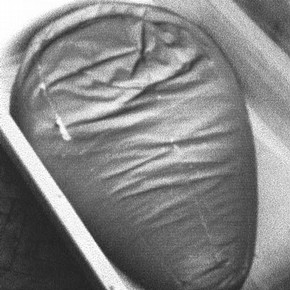 Sacco and Blow represent a shift in style, public taste, and popular culture. The 'enjoy-it-todaysling- it-tomorrow-philosophy'  2  of the 1960s created a youth market anxious for a new and exciting approach to home furnishings. Designers were encouraged to develop unpretentious low-cost furniture that would reflect a liberal-minded and classless society. The Italian designers flourished with this new ethos and a number of new companies were founded in the 1950s and 1960s. Their furniture met the ever changing lifestyle of the 1960s. 'The 1960s gave way to a new idea or 'meaning' of plastic furniture. Plastic was, in a way, both form and content. It had now become 'true to its material''.  3

It is unclear from the location records when and why these two chairs were put into storage. Sacco is stored at Blythe House (one of the V&A's off-site storage facilities) in what I call a 'plastic coffin' (figure 3). The PlastazoteTM (Polyformes Ltd.) lined plywood coffin was constructed to house the object since it can no longer be displayed. The polyurethane fauxleather cover has degraded and is separating from its base fabric. The cover is so fragile that even the slightest puff of air can cause delamination (figure 4). The cover was analysed by Fourier Transform Infrared Spectroscopy (FTIR) to confirm that indeed it was polyurethane.  4  Polyurethanes degrade when exposed to light or heat. Oxygen and moisture within the environment cause oxidation and hydrolysis.  5  It is unfortunate that an object less than thirty years old cannot be displayed. We are not sure if the degradation of this material was caused by improper storage or if it is inherent in the nature of the material. 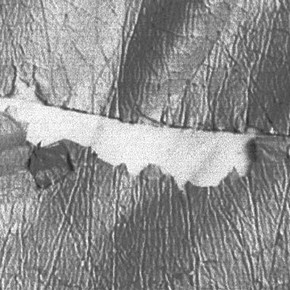 Blow's condition is quite dramatic since there is overall yellowing of the PVC that is very common in this type of material. The yellowing is an indication that cross-linking and conjugation have occurred.  6 This type of degradation is not reversible and can be caused by ultraviolet light or heat. PVC has plasticisers added to give flexibility to the material. Plasticisers are rather volatile and are easily lost, so the material gradually hardens and becomes stiffer. Deterioration can be retarded if the object is stored properly or displayed in low light, following the approach for textiles. The cushion of the chair was in disastrous condition and will probably never be inflated again. Apparently it had been punctured and in 1980 it was sent to the Furniture Conservation Studio to be repaired. Unfortunately, the chair was repaired with a product called LoctiteTM(Marshall Industries) which is a cyanoacrylate. This type of adhesive is not reversible and we probably would not use it today. The repair must have failed at some stage and the cushion was folded and put into storage. When I found this part of the object there appeared to be ink and paper stuck to the object (figure 5). After some detective investigation I discovered that the ink was from a photocopy of the curatorial record of the object. It was probably placed there so that this part of the object would not be lost, since it had been separated from the rest of the chair.

The Future: Looking Ahead 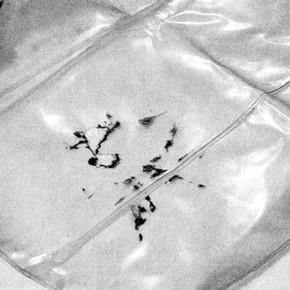 Aside from the question of whether these objects were ever intended to last, we need to assess the conservation problems they present. We can begin by setting up guidelines - to retard the degradation or at least understand the ageing process of these materials.

In my final year as a student on the RCA/V&A Conservation Course, I will concentrate on modern materials used in the construction and design of Twentieth Century Furniture. I plan to conduct a survey of objects from the Furniture & Woodwork Collection at the V&A. This methodical survey coupled with scientific analysis will help to identify materials and structures that are particularly prone to deterioration. Gathering archival information on manufacturing techniques and the environmental history of the objects will lead to an understanding of the deterioration mechanisms involved. The aims of the survey will be to provide details on the materials in the collection; ascertain the present condition of the objects; determine the atmospheric conditions under which the artefacts are stored and displayed and give information about preventive and remedial measures. My study will be an important step in solving the problems of deterioration such as those which have affected Sacco and Blow, and the other modern materials used in contemporary furniture. The sooner we assess the problems, the sooner we can find solutions.

I would like to thank the RTZ Corporation PLC and the Committee of Vice-Chancellors and Principals of the Universities of the United Kingdom (Overseas Research Award) for their interest in, and financial support of my studies.