The Arundel Society - techniques in the art of copying

The Department of Prints, Drawings and Paintings (PDP) in the V&A is now home to over 300 watercolours produced by copyists employed by the Arundel Society. A recent display of a selection of the works at the V&A, not only marked the National Gallery's gift of the watercolours to the Museum but complements the large collection of Arundel reproductions, also held in PDP, made from the very same watercolours. Although the Society was founded before the establishment of the South Kensington Museum their links have been strong. Henry Cole, the Museum's first Director, took the lead in expanding the Museum's collection of reproductions as a way of disseminating art to the masses. I was the conservator for this display. Assessment of condition showed that many of the exhibits required attention, some more complex than others. One of the professional copyists employed by the Society was Christian Schultz who copied Hans Memling's Floreins Triptych in 1863. It is his central panel - Adoration of the Magi - that I have chosen to discuss in the context of methods of copying and materials. 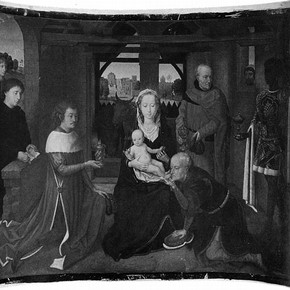 Figure 1. Adoration of the Magi (Museum No. E209-1995) by Chistian Schultz after Hans Memling before conservation. 346x426mm. Photography by Victoria Burton. (click image for larger version)

'The object of the [Arundel] Society has been to preserve the record and diffuse a knowledge of the most important remains of painting and sculpture, to furnish valuable contributions towards the illustration of the history of Art, to elevate the standard of taste in England, and thus incidentally to exert a beneficial influence upon our native and national schools of painting and sculpture...The forthcoming work will show the efforts made in order to popularise high art among people who have everything to learn and gain experience.' 1The Arundel Society, founded in the same year as the Pre-Raphaelite movement, saw the progress of art in England as being dependent on popular taste. It was established with the aim to promote a greater knowledge of art through thepublication of literary works and reproductions. The works to be recorded and reproduced were Italian fresco cycles, although classical art was included from the outset, and a handful of Northern European artists' work was also copied. The Society was named after the connoisseur and collector Thomas Howard, second Earl of Arundel and Surrey - a man whom Horace Walpole described as the 'father of Vertue in England' 2 . The history of the Arundel Society is inextricably linked to the history and methodology of art reproduction, as well as the popularisation of art, and it should be seen in the context of other such societies established for the dissemination of moral and educational material. 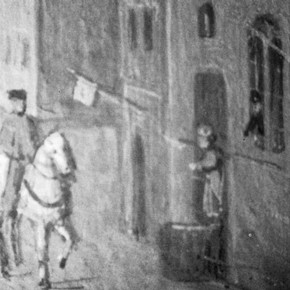 Figure 2. Detail of E209-1995, of distant view of the Magi approaching on camels and horses depicted trough the right hand side vista. Photography by Victoria Burton. (click image for larger version)

'Every man will naturally and unavoidably mix something of himself in all he does, if he copies with any degree of liberty...' 3

One of the problems the Society faced with regard to the issue of copying was ensuring the accuracy of the copy, this was often debated. The accuracy varied depending upon the copyist, the image depicted and whether it was to be used for reproduction or purely recording purposes. The subscribers would have had little or no idea of what the original looked like since they were not subject to the forms of modern communication and image formation that we have taken for granted. Although most of the techniques used by the copyists have not been documented, they most likely did one or more of the following:
a) copied in watercolour directly from the original;

b) executed preparatory drawings from the original, composing the finished work in their studios;

c) made tracings directly from the originals.

This latter technique has been extensively documented in various journals of the period. The tracings were known to have been exhibited in their own right to simulate the interiors from which they were traced. Generally, they were reduced in scale and painted up in thin watercolour washes so as to best mimic the translucency of the fresco technique. Rossetti, in a letter to William Allingham in 1856, wrote about the copyist Mrs Higford Burr who was in Italy in the same year, describing her techniques:

'...10 hours on top of a ladder to copy a Giotto ceiling being nothing to her. She has been travelling all over Italy with Layard, and they together have given one one's first real chance of forming a congruous idea of early art without going there...' 4

Technical examination of Adoration of the Magi by Schultz 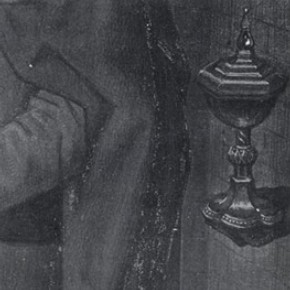 The Arundel Society was not creating an interest in Northern European art in the same way that it had with the so-called Italian primitives, since the fascination with German Romanticism had already begun in the early 1800s. Schultz was employed by the Society in the early 1860's until his death in 1882 or 1883, because his technique, described below, was seen to have mimicked that of the Northern European artists so well. His style of using a heavy application of watercolour and body colour on vellum evoked the appearance of the materials used by Memling in the original - oil on panel. The size of the original panel and Schultz's copy are very close and this would no doubt have been an advantage in the accuracy of the copying.

If burnished and finished to a smooth plane, vellum becomes a receptive surface for detailed and fine painting, and thus is a perfect material on which to copy such a panel by Memling. If a painter wanted to particularise every detail he would tend to select a smooth paper or skin, since a textured surface would not suffice for fine lines and smooth covering. Scientific analysis by EDXRF (Energy Dispersive X-Ray Fluorescence) to aid identification of pigments, identified lead in nearly all the samples taken and this can imply one or two options - that a lead white (lead carbonate) ground was applied before drawing or there is lead white present in all the pigments to render them more opaque. The former is a very old technique and could indicate the use of a metal stylus to draw the outline of the copy. Cennini 5 describes the process of covering sheets of vellum and paper with white lead and a carrier (probably a gum in this instance) to be used as a coating or ground to improve the strength of the metallic image. This technique continued to be practiced in the nineteenth century. It seems likely that Schultz could have made use of this method since lead white is known to produce a particularly smooth ground.

Watercolours are composed essentially of ground pigments and mixed with a gum arabic medium. The addition of an opaque substance, often a white pigment such as chalk or blanc fixe, would have produced the density needed to mimic oil painting. It produces an appreciable film and creates a dense paint layer if applied in a concentrated manner. Although we cannot be certain, it is likely that the type of watercolour used was one of a new range, the so-called 'Moist Colours', produced by Winsor and Newton in 1846. These came in metal tubes and would permit the application of large areas of relatively dry watercolour at full saturation. This limited use of moisture would have suited its application to vellum which is extremely reactive to moisture. Thus the appearance of an oil technique could be suggested in watercolour. Thickly applied watercolour is likely to fracture and this type of cracking was evident in Schultz's copy, and paint loss had occurred in some areas. The Virgin Mary is historically shown wearing a robe of lapis lazuli blue. Azurite in an oil medium is known to darken over the years and Schultz would have recorded what he saw. This would have been a darker blue and was, as the analysis found, copied by using synthetic ultramarine.

The red pigments seen on this object were predominantly red lakes with the addition of small quantities of vermilion. The red lake, perhaps a carmine or crimson lake, is found in nearly all the red garments. Lakes are generally transparent but, as in this case, can be opacified by precipitation on to a base such as zinc oxide. Carmine/crimson lake is made from cochineal, a natural organic dyestuff made from the bodies of the female insect Coccus cacti. Carmine lake is an aluminium or aluminium-tin lake of cochineal with water and alcohol: vermilion is a bright but opaque mercuric sulphide.

The sky area was found to contain lead white and cobalt blue. Cobalt blue is a compound of cobalt oxide and phosphoric acid. It is bright, clear and translucent but not as deep or intense as ultramarine.

The border was assumed to be a lacquer of shellac origin because of its glassy, shiny appearance, with a dark brown stain. It has little adherence to the surface and suffered much loss.

Reproducing the copy for publication

In 1852, Layard, a Committee member, suggested the use of chromolithography as a means of reproducing the copies. The chromolithographs were far more attractive and colourful for the subscribers than the plain linear woodcuts which were initially produced by the Society. In 1859 the Department of Science and Art made an annual grant of £100 to the Society so that the prints could be sent out to educational establishments across the country.

The watercolour technique was well suited to the reinterpretation by the lithographer since it involved colour separation using watercolour washes. The lithographer analysed the component colours of the watercolour, and since Schultz was both watercolourist and lithographer of this copy it could be summised that he would have been well disposed to this part of the process. Each colour was given a lithographic stone for printing - sometimes up to 20 stones were used. The outline version of the image was drawn in a red chalk. This was non-receptive to grease, and therefore non-printing, and the outline was transferred to each of the stones - one for each colour. The 1860s saw more sophisticated colour theories come to fruition, and hence more realistic effects emerged using a linear image coloured by stipple combinations of yellow, blue and red with the extra flesh-type tints for hands and faces.

The Arundel Society continued to copy and reproduce works until 1897, when it found itself overwhelmed by the impact of the photography market as a cheaper and faster means of reproduction. Between 1848 and 1897 some 37 engravings and 197 chromolithographs were issued 6 , as well as over '430 fictile casts and electro-bronzes of pagan and medieval carvings... 26 books and texts to accompany the prints and works on stained glass, illuminated capitals, the Bayeux tapestry and on lace making.' 7