Conservation and Mounting of Leaves from the Akbarnama 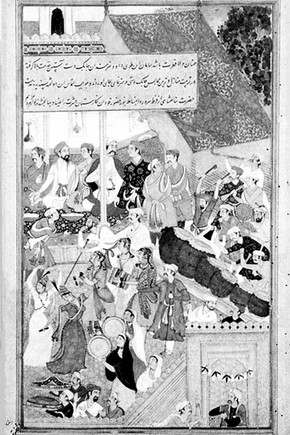 The Akbarnama is a remarkable work of 116 miniature paintings and is noted for its minute detail. The manuscript gives a picture of the emperor Akbar's life and times, in both text and illustrations. The illustrations are not merely entertaining but are of unique documentary value. The high degree of modelling of the figures and the realistic recession of the landscape towards the horizon is evidence of the influence of European art, as this is common in the western painting of this period.
The Victoria and Albert Museum holds a substantial part of what is thought to be the first presentation volume of the text and attracts interest from researchers and scholars world-wide. For this reason it has been designated as an object of exceptional cultural value within the V&A's collections and has been selected as a priority for treatment.

Akbar was born in Pakistan in 1543 and inherited the throne at the age of thirteen, on the death of his father, Humayan. Humayan had met two Iranian master artists, Mir Sayyid Ali and Abdus Samad, during his exile. They subsequently joined his service and later directed the painting studio under Akbar. Their first major project was the Hamzanama manuscript, but the Akbarnama was begun in 1569 and probably completed by 1590.

The illustrated manuscript was bought by the South Kensington Museum (now the V&A) in 1896 from Mrs Frances Clarke (Figure 1). It had been acquired by her husband upon his retirement from serving as Commissioner of Oudh (1858-1862).

Shortly after 1896, the paintings and illuminated frontispiece were removed from the volume to be mounted and framed for display. Clarke wrote a report for the museum pointing out that the paintings carried attributions to the leading painters of the reign of Akbar and that the manuscript had a number of seals and inscriptions. Some of the seals and endorsements are from the period of the emperor Jahangir and later his grandson, Aurangzeb. The Akbarnama was displayed in its entirety in the Mughal Room of the South Kensington Indian Museum (an annex of the V&A) from 1936 until 1955 (Figure 2).

Structure and Condition of the Akbarnama pages before treatment 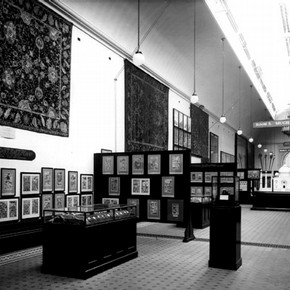 Figure 2. The Akbarnama on display in the Mughal Room of the South Kensington Indian Museum. (click image for larger version)

The leaves of the manuscript are made up of a laminate of three sheets of paper. They have been highly burnished and surface sized with starch. The miniature paintings and the leaves are an integral whole, rather than the painting being 'set into' (inlaid) the sheet. The miniatures are painted in opaque pigments in a gum arabic medium, and in many cases the colours have been burnished. In some areas of pigment loss it is possible to see traces of underdrawing in black chalk.

The paintings are surrounded by a border of ruled lines in opaque watercolour and the lower margins contain notes in Persian. The verso of each sheet contains a text panel. The leaves of the written manuscript are of a different thickness to the leaves with full page illustrations.

When the pages were removed from the binding in 1896, the paper guards along the spine edges were left in place. The pages were mounted with a very wide range of acidic boards and papers. Both the recto and verso of the object were disfigured by unsympathetic repairs of brown paper and glassine tape. Also there were many edge tears, holes and channels resulting from attack by furniture beetle. In some cases the repairs on the recto extend into the image area causing unsightly distractions and others where the repairs mask important inscriptions in the margins.

Many of the miniatures showed signs of flaking paint and powdering of pigments, as well as surface marks caused by abrasion. The thick layers of pigment were very prone to cracking, especially in cases where the surface has been burnished. The white pigment used for the painting of the faces seems to have been particularly prone to flaking and loss: due to lack of adhesion to the burnished pigment underneath, lack of binding medium when the paint was applied, or because a thick layer of paint had been applied on top of a thinner paint.

The range of pigments identified include Indian yellow, vermillion, iron oxide red, malachite, azurite, indigo, and carmine lake. Verdigris has not been found on the Akbarnama miniatures examined to date. Even though all of the miniatures were out on display from 1932-1955, there is apparently very little fading of the colours. This is probably a result of the use of relatively thick layers of pigment and binder compared to the transparent watercolours in western paintings.

An aqeuous solution of methyl cellulose (0.5% weight per unit volume), with a few drops of alcohol, was selected as the consolidant. Methyl cellulose of a relatively low viscosity was chosen because the refractive index of  the paint surface was least effected and no visible surface gloss was caused at the selected concentration. The consolidant was applied by brush whilst viewing the paint surface with a low power binocular microscope. The very dilute nature of the methyl cellulose necessitated multiple applications.

Powdery surfaces presented more of a problem when applying the methyl cellulose. It was difficult not to disturb the pigment residue. It is hoped to alleviate this problem in the future by applying consolidant with an ultrasonic humidifier or by using a micro syringe.

The brown paper patches were removed with poultices of methyl cellulose and water, or with very moderate local applications of steam. Care was taken to only use the minimum amount of moisture to allow the removal of the repairs and thus prevent undue cockling of the pages.

Insect damage, splits and tears were reinforced on the verso of the sheet using thin Japanese paper. This was toned with watercolour beforehand and adhered with wheat starch paste. Insect channels were filled with macerated Japanese paper fibres mixed with wheat starch paste. Only the most unsightly repairs were removed, as often the tonality of existing repairs could be modified with watercolour or pastel. In all cases, inpainting was confined to fills or repairs, and no reconstruction of missing areas was attempted.

In a few cases where the cockling and distortion were sufficient to interfere with the appreciation of the miniature flattening of the pages was attempted. Gradual humidification was carried out using either a Gore-tex (W.L.Gore & Associates Inc.) and blotting paper sandwich, or by suspending the page over a bath of cold water on a nylon mesh support. In several cases, humidification resulted in slight concavity of the page after flattening in the press. This was considered more visibly acceptable than the localised cockling. 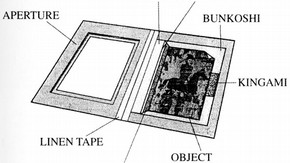 Figure 3. Fascicule system used for the mounting of the Akbarnama. Illustration by Danny Norman. (click image for larger version)

In 1996 a survey of the housing condition of the Akbarnama miniatures revealed the following;

After consultation with the Indian and South East Asian Department, it was decided that the treatment carried out should be kept to a minimum and that the mounting system should not disguise the fact that the miniatures were originally part of a bound manuscript. For this reason, it was decided inappropriate to inlay individual pages, in the technique usually associated with the mounting of watercolours and single sheet drawings. Furthermore, the guard strips along the spine edges were left in position as proof that the objects were fixed originally into the binding.

When choosing the mounting system the points raised in the survey were considered. It was fundamental that the object could be viewed easily without causing any damage. The mount had to be deep enough to ensure that the painting did not rise above the aperture whilst allowing for the possibility of further cockling. The apertures needed to be enlarged to reveal more of the recto and allow the inscriptions around the edges to be read without raising the mount. This is especially important when the object is displayed in a frame. Finally all the materials used for rehousing must be approved conservation materials of a known composition.

A fascicule, adapted to our own requirements, seemed the most suitable method of attachment into the mount. The fascicule was introduced by Christopher Clarkson 1  at the Bodleian Library to describe the method of single sheet material attachment into a bound format. After many experiments with a variety of materials, it was decided that Japanese mulberry papers of varying weights, attached using wheat starch paste produced a strong and flexible hinge to support the leaves.

It is important to state that the fascicule method selected for the mounting of the Akbarnama represents a very particular solution which both conservators and curators agreed was sympathetic to the history and format of the objects. It is the most appropriate method for objects which are usually stored horizontally, but is not necessarily recommended for Indian miniatures which are to be displayed in frames for long periods of time (for which the tabs of Japanese paper along the top edge are the safest method of hinging). 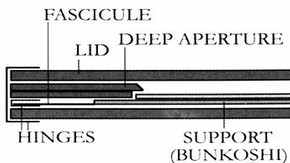 Figure 4. A cross-section of the mount. Illustration by Danny Norman. (click image for larger version)

A wide strip of lighter weight Japanese paper, Kozo Hosokawa, was attached to the left hand strip of Kingami to allow flexibility when turning the page. A sheet of Bunkoshi paper, to act as a support sheet when turning the leaf, was pasted to the Kozo Hosokawa using a thin strip of the same paper. This thin strip was then attached to the verso of the fascicule. Finally, the excess of the wide strip was pasted to the backboard of the mount to become a hinge (Figure 3).

The aperture of the mount is cut from Museum Board (6-ply). This slightly covers (clips) the edge of the object, but allows the edge of the miniature painting to be clearly seen. To ensure that the aperture does not rub against the surface of the object, another 6-ply board aperture is cut slightly larger than the object then attached to the back of the first aperture. This adds depth and ensures that when the mount is closed there is no pressure, from the top aperture, onto the pigments' surface. The second aperture surrounds the object but does not actually touch it, leaving the object to move quite comfortably inside the mount. A lid of Museum Board (2-ply) is attached to the mount to further protect the miniature during storage. This can be folded back behind the mount when the object is in a frame (Figure 4).

When the Akbarnama is returned to storage, a sheet of Museum Board (2-ply) will be placed in the top of each solander box. This will be placed over the the aperture of the open window mount to prevent the object falling through the aperture when it is turned over to view the verso.

1. Clarkson, C., and Lindsay, H., Housing single sheet material: The development of the fascicule system at the Bodleian Library, The Paper Conservator 18, 1994, p40-48.