For eight weeks last summer I worked in the conservation laboratory of the Asian Art Museum of San Francisco. I also spent two weeks with a private conservator, working on a collection of outdoor bronzes located at Stanford University. This was a unique opportunity for me to compare the conservation methods of two nations - the UK and the USA - and to gain an insight into the varying Western and Eastern ideals towards conservation and restoration. Although I was concentrating on metal objects I was also able to observe conservation being undertaken on ceramics, textiles, wood, lacquer and paper as the laboratory was shared by conservators from all disciplines. 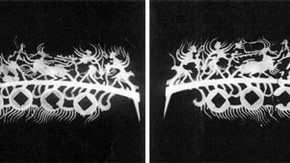 My main project at the museum was concerned with a recently acquired Eastern Han Money Tree (22 220AD). The tree consists of five tiers of branches of thin copper alloy casts suspended from a central trunk which is inserted into a ceramic base. My task was to provide a detailed condition report and treatment proposal, including considerations for display in an earthquake zone. The condition report included colour photography of all sections as a record of the archaeological patina, and x-radiography to provide an insight into structural stability (Figure 1). Spot tests were also undertaken to identify some of the salts on the copper alloy surfaces and the base, and to determine suitable solvents for the removal of unsightly old repairs.

The aged resins which made up several of the repairs were very difficult to dislodge, but I did have a chance to try several techniques to remove them, including the use of air abrasion, heat spatulas and chemicals not normally used by the V&A. The latter course of action lead to a safety comparison of chemicals used in the States and the UK. Many of the techniques I learned from working on the Money Tree were put to use on other projects. X-radiography proved useful when investigating a Yu (a type of vessel) reputedly of the Sung period (960-1279BC). An x-radiograph of the lid and base revealed a hidden inscription, indicating that the vessel was of a much later date than originally suggested.  Taken in conjunction with other factors, it seemed possible that the vessel might actually be an early twentieth century fake. 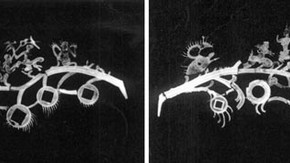 The method used for reattachment of fragments on the Money Tree was also appropriate for an extremely dilapidated flat cast lead figurine. I investigated the possibility of consolidative lead reduction although it ultimately proved to be unsuitable for this object. However, the research proved useful in the localised reduction of an inlay of lead on a Japanese inkstone box. This is a technique which could be very useful in decorative arts conservation and is an area for potential further study at the V&A.

In line with all these projects was the need for art historical research, regular meetings with curators, and consultation with other conservators outside the museum on both the East and West Coast. I was able to visit the Getty Conservation Institute and the Los Angeles County Museum in Los Angeles as well as several other museums in San Francisco. I was involved in a public open day where conservators could be consulted and gave a brief presentation to the museum staff on my work.

In complete contrast to the laboratory work, the work at Stanford was open air, large scale and very much hands on. I was mainly helping in the maintenance programme of the University's collection of Rodin bronzes, which are displayed outdoors with a high level of public access. Our job was to wash the bronzes and re wax them, with a high melting point paste wax, to provide protection from the weather and corrosive agents such as bird droppings. Some areas of discolouration had to be integrated prior to waxing, most obviously on the figures where the original patination process had included the application of tinted waxes. The wax layers had deteriorated, unevenly exposing underlayers of the patina which had, in turn, been degraded by weathering. Discoloured areas were tinted to match surviving patches of the original patina and then a hot wax was applied, in the same manner that bronzes are waxed when they leave a foundry today.

Overall, I was delighted to have an insight into a period of metal working that I was not familiar with -principally the ancient Chinese expertise in casting and metalworking - and to encounter the associated conservation problems of archaeological patinas. Having been involved in the production end of bronzes prior to my time at the V&A, it was also very interesting to observe the long term exposure effects on bronze. In these fields I owe an enormous debt of gratitude to Tracy Power, objects conservator at the Asian Art Museum for her knowledge, expertise, patience and infinite good humour, and to Michelle Barger for her support and excellent guidance on the Rodin work.

I would like to thank Rio Tinto plc, The Friends of the V&A and The Conservation Unit of the Museums and Galleries Commission for their generous financial support of this trip. My repeated thanks go to the Matthew Wrightson Charity Trust, the Armourers and Brasiers Gauntlet Trust, the Newby Trust and the Patricia Fey Memorial Fund for their continued monetary support throughout my studies, along with the South Square Trust who have helped finance my final year.