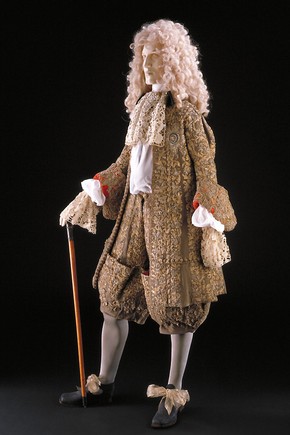 In 1995 the Victoria and Albert Museum acquired a suit made for King James II (of England) to wear at his wedding to Mary of Modena. The Museum was helped in this acquisition by generous contributions from the National Art Collection and the National Heritage Memorial Funds. This suit is of particular importance for costume historians as it was made in the transition period between the petticoat breeches and doublet of the earlier seventeenth century and the later streamlined fitted breeches, vest and long jacket (Figure 1). It is also reliably dated. The jacket carries the only example of a seventeenth century garter star still attached to its original support.

The wedding took place in the winter of 1673, at Dover, and the suit was subsequently given to Sir Edward Carteret, of Guernsey. It was acquired by the Museum from his descendants. This suit was made of grey wool broadcloth (suitable for the English coast in winter), lined with coral ribbed silk. Both jacket and breeches were decorated with shaped panels of gold and silver embroidery of lilies and honeysuckle, under the embroidered panels was a strengthening layer of linen. The jacket cuffs were faced with an extension of the sleeve lining and decorated with applied gold and silver lace.  Wooden buttons covered with gold and silver played an important part in the overall decorative effect.

The huge external breeches pockets were lined with matching coral silk ribbon. The jacket was very narrow and when fastened would have fitted a 32"(80cm) chest. A waistcoat and matching horsetrappings were reported to have been part of the original. 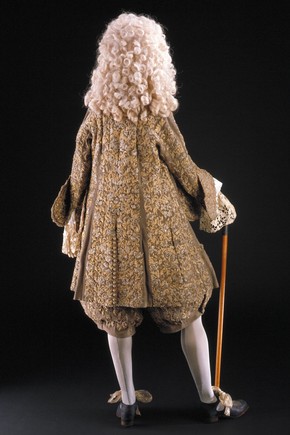 Extensive conservation had taken place on this suit in the 1920s. The gold and silver embroidery was remarkably bright and untarnished considering its proximity to the woolen fabric but when examined more closely it was found to be springing up in many places, and in areas of wear, such as between the legs, much had disappeared. Because of this wear it was possible to see every stage of the embroidery process, and the construction of the different elements; there were even traces of the wheat starch paste used to adhere covered vellum strips, which are now missing.

The wool broadcloth itself was heavily darned. The yarns used were not always identical in colour but they blended in well and did not cause distortion. Strips of a different, well matched wool fabric had been used to replace the original fabric in the back of both the breeches' legs, above the bands binding the bottom edge. The crotch area had been extensively patched with this same fabric.

The jacket lining of coral ribbed silk had been covered, except in the armholes and over the buttonholes, with coarse red cotton mesh, which totally obscured the original lining. It had faded to brown around the neck and lower edges, but still seemed strong. It was smaller than the area it was covering and was aggravating the tendency of the jacket to fold inwards between the strips of heavy embroidery. The original lining under this net was also badly faded in places and very degraded. It had been heavily couched to patches of well matched silk using lengths of thick untwisted silk yarn. Two large areas of lining at the front had been totally replaced with this patching silk.

The ribbed silk facings on the cuffs were faded and badly worn on the folds. The breeches had no lining but there were traces of a plain cream silk under the fly and waistband seams. More recently a strip of pink silk had been applied to the waistband, this too was partially missing. There were two silver hooks on the back of the waistband which must have linked onto the waistcoat recorded as being part of the original suit.

Buttons played an important part in the overall decorative impact of the embroidery. They were of wood, covered in gold and silver threads and of various sizes, according their postion. There were 48 buttons down the front opening edge - of these 32 had corresponding cut buttonholes. The remainder of the holes, being purely decorative, were not cut. The buttons and buttonholes at the top were the most worn. The pair of decorative front jacket pockets both had nine buttons remaining, corresponding to ten cut holes (some moth damage had occurred along the cut edge of one pocket flap). The five small fly buttons were the most worn and degraded of all and the large main button holding the waist band was missing.

The jacket had 9"(23 cm) openings in the left and right side seams. The opening to the left side gave access to a pocket of lining fabric. The decorative front pockets, too, were of this silk lining fabric.

There were six pockets in the breeches, one on either side of the front opening and a double pocket in each side seam, the openings all bound with narrow fawn silk braid. These pockets were made from chamois leather which had stretched, splitting the cream silk linings, which, where they still remained, were very degraded.

The seventeenth century garter star had two coiled metal elements that were springing up and several loose threads.

The most difficult conservation decisions about the wedding suit involved the treatment of earlier conservation.

The red cotton mesh covering the lining, although it did not look good, was strong and appeared to be protecting the lining adequately. However, it almost totally obscured this lining and we later discovered it was too narrow around the bottom hem but this was not clear until after its removal. Should an adequate, if unsympathetic, piece of conservation be removed for cosmetic reasons? How important was it for the lining to be clearly visible? The answers were not obvious. Other conservation work was carried out on the jacket while the the decision was pondered and discussed with other conservators. It was eventually decided to remove the mesh. Dyed silk crepeline, a fine transparent fabric, was cut to the shape of each  piece of lining. It was sewn into each seam, and attached, with a brick like pattern of vertical lines of stitching, to the body of each piece.

When this process was completed, it was obvious what an improvement this restoration of the original colour (now matching the cuffs again), made to the appearance of the suit. The weak front buttonholes were strengthened with this same dyed silk crepeline, rectangles of which were placed between each hole, enabling extra strengthening button-hole stitches to be worked through each hole and this silk. The couching was left in place in the lining, as much of the original fabric would have been lost with its removal. Although it was heavy, it was satisfactory in stabilising the degraded lining silk.

The cuff facings posed some problems. Covering the worn areas with a transparent sympathetic textile seemed the best solution and dyed silk crepeline was the most suitable fabric cosmetically. To counteract fraying when the intricate shapes needed were cut out a small seam allowance was left and stay-stitching was run around the actual edge of the pattern. A line of carboxymethyl-cellulose was painted just outside the stitching line. A silk lining was made for the breeches to protect the underside of the embroidery and to facilitate mounting on a dummy.

This amazing suit had captured the public imagination and received much publicity. It is now back on display in the Dress Collection, in Gallery 40 at the V&A. A replica suit has been made, which students can examine.