The work of the students on the RCA/V&A Conservation Course is regularly featured in articles in this Journal. Some articles relate experiences of working elsewhere such as the one by Sophia Strang Steel, whilst others concentrate on the studio based work. However, the last issue to include abstracts from student essays and research projects was April 1997 (number 23) and as such we have a substantial backlog which we hope to put right in the next two issues. The aim remains to provide a comprehensive collection, publishing a selection as space and opportunity allows. Here we present three of the major projects completed by students in their final year, together with some of the Science and History of Design essays from first year students.

This report examines the evolution of the painted and gilded decoration within the main staircase and its adjoining circulation spaces at Strawberry Hill, Middlesex. Strawberry Hill is one of the most important buildings of its period in England. The aim is to discover the initial appearance of the interior of the building and those thereafter. It commences with a thorough summary of the documentary evidence available, and uses illustrations to chart the historical evolution of the Staircase, Armoury and Hall. This is followed by a section outlining how paint samples were removed from the site and examined under laboratory conditions. The findings of the analytical investigation are then discussed in detail and photographs of relevant cross-sections are included to aid understanding. Most importantly, the findings from the historical research and the analysis of painted surfaces are then married together to form conclusions regarding the development of decoration within these rooms. The appendices include sample lists, sample location plans, tables of decoration schemes, results of micro-chemical and staining tests, Fourier transform infrared spectroscopy and scanning electron microscope examinations, colour readings, examples of cross-section diagrams, bibliography, illustration sources and photographs

Conservation Science
Richard Redgrave (1804-1888); a study of his paintings and work, in the context of the Victoria and Albert Museum
June 1997 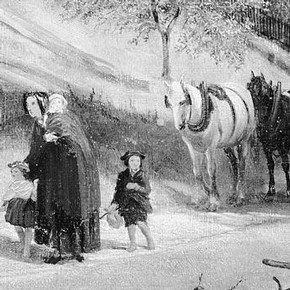 Richard Redgrave was a talented Victorian gentleman who played a significant role in establishing the South Kensington Museum, now known as the V&A. He was a self-taught painter who initially specialised in genre subjects but later progressed to landscapes in response to both the changing attitudes of Victorian society and the increasing demands on his time. This project aims to contribute to the growing understanding of oil painting materials and techniques used by nineteenth century artists. This has been attempted by examining four of Redgrave's paintings. Although particular emphasis has been placed on Redgrave's choice of pigments a discussion of media is also included. It has been found that Redgrave made use of some of the `modern' pigments that became available during his lifetime notably cadmium yellow, ceruleum blue and chrome orange. The year 1854 is now thought to be the earliest identified use of cadmium yellow on a dated English painting. This study highlights Redgrave's strong interest in painting techniques and also his concern for the conservation of works of art. His pioneering work in overseeing the control of the environmental conditions in the Sheepshanks Gallery establishes him as an early advocate of `preventive' conservation.

This research project investigates the types of corrosion one might encounter while conserving a medieval stained or painted glass panel, and suggests various options for cleaning the glass while protecting its paint work and protective gel layer. Previous techniques are investigated and suggestions for new alternatives are made.

For this research, two panels from St. Denis, France (dated 1140-1144AD) were chosen to represent some of the problems that one might encounter when considering various cleaning techniques for the early medieval period. As there are other panels of this type in various museums, the aim was to try to identify the problems, and then devise a suitable treatment. In their current condition, they are difficult to display. Therefore, various techniques were employed to analyse their current condition and subsequent treatment.

The display and storage of objects often accelerates the corrosion of metal elements when, inadvertently, they are placed in close proximity to substances which release volatile carboxylic acids. In many instances, this is when objects are confined either in cases made of wood, or in cases which use air drying paints and urea-formaldehyde based adhesives. This paper acknowledges the particular problems in relating scientific research of predominantly outdoor corrosion to those conditions in display cabinets. In conservation terms, fluctuating temperatures and high relative humidity (RH), amongst other variables, give rise to situations that are arguably unique to a given location so it is hard to replicate conditions faithfully in the laboratory. As yet the complete mechanisms of the corrosion of lead and zinc by carboxylic acids are not scientifically understood. This paper is an assimilation of scientific and industrial data on the properties of the above metals, on acetic and formic acid (covering their formation and availability), and a brief review of some relevant corrosion mechanisms. The information is then related to the specific corrosion of lead and zinc by acetic and formic acid using previous conservation observations.

This paper examines theories of adhesive bonding in general and the adhesive bonding of wood in particular. The process of adhesion is fundamental to conservation practice whether directly (e.g. loose joints in furniture), through the treatment of unstable or disintegrating objects by consolidants, or surface coating (e.g. flaking paint).

The first section of the paper deals with adhesive theory and therefore starts with a brief review before presenting a more detailed examination of adsorption theory. After considering the surface energy of liquids and solids and resultant effects on adhesion, conflicting theories of adhesive failure are considered. The second section of the paper examines the adhesive bonding of wood. It begins with a simplified discussion of wood anatomy in order to allow the consideration of the bulk properties which directly affect the adhesive bonding of wood - moisture content, porosity, density, surface preparation and the thickness of the adhesive layer.

It is only in the fairly recent past that "plastic" and composite materials have become a feature of many museum collections. During the past decade, the fact that such materials degrade, sometimes very rapidly, has become a matter of concern for conservators. Before appropriate treatments can be established for specific polymers, it is necessary to gain an understanding of polymeric materials and their deterioration processes, at a visual, structural and molecular level. This essay considers polymers, with particular attention to those used in the production of furniture. The introduction provides definitions, the following section considers the behaviour of plastics in a general way and the chemistry of polymer formation. Subsequent chapters consider the use of plastics in furniture, focussing on structural, surface and upholstery applications. It was not feasible to discuss all materials used in furniture so three are highlighted: nitrocellulose lacquer, polyurethane foam and glass reinforced polyester.

History of Art and Design Essays 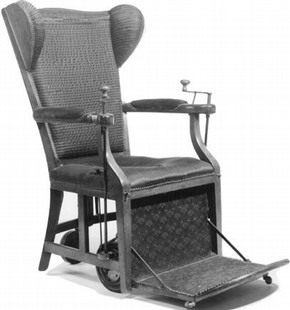 The design of the self propelling wheelchair through the twentieth century is placed in a historical and social context with a view to exploring the impact of changes in the ideological construction of disability. The central thesis is that cultural values and prejudice are embedded in design and that the history of design of wheelchairs, encompassing more than mere changes in form or technology, cannot be fully understood without reference to the ideological construction of disability.

Design does not operate in a vacuum - ideology shapes the design consensus. The hegemony of constructed disability has shaped wheelchair design infusing it with cultural meaning and symbolism which is independent of objective function. Wheelchair design reflects social and ideological change and provides a historical narrative on cultural attitudes to disability. The source of disability is located in political process rather than physical function - disablement is a result of social structures and ideology rather than an individual's physical capacity.