The following is a brief outline of the further developments to the Perspex ™ (ICI) slotted book cradle design featured in Journal 22. 1  This method was designed as a reusable alternative to the board and cloth cradle used at the Museum for the display of books and related materials. In the period following the article, the new design of two Perspex combs and wedges was used for several in-house displays and exhibitions. During this time the pros and cons of the design were further assessed. The cradle had worked as a prototype but with regular use there emerged several aspects that warranted further attention. 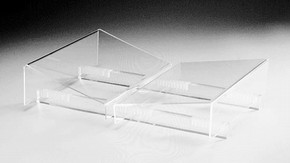 The design divides into two distinct parts: Perspex comb supports that are reusable and wedges of Perspex or mount board that support the open book. In practice the wedge supports proved a success. The problems lay with the Perspex combs. The first was with the matching of the wedge supports to the combs. If there was any discrepancy between the verticals of the wedge supports and the slots in the combs it became difficult to slot them together. This put strain on the teeth of the combs which resulted in them snapping. The second problem occurred when trying to reuse the combs for different books. It became obvious that it was not always possible to match the comb length to a specific book, even with a selection of lengths. This resulted in a mismatch, causing the ends of the combs to extend beyond the book, and detracting from the appearance of the book on display. The combs could be cut down to fit but this just added further time and complications.

As the cradles had been used for several exhibitions, and in light of the problems with the slotted design, it seemed appropriate to hold a further development meeting. Both designs were discussed and Brian Griggs, Head of Design at the Museum suggested that a possible solution to the drawbacks with the slotted cradle would be to replace the two slotted combs with a single block of Perspex, longitudinally slotted. The slotted block would sit centrally, directly below the book, replacing the two combs of the original design, with the wedges of Perspex slotting along one edge into the block to support the open book.

Design Animations,  the company responsible for supplying the original Perspex components, were asked to provide a prototype Perspex block. This was made from 12mm Perspex and measured 150mm x 150mm. The longitudinal slots were 5mm deep and 2mm wide. The distance between slots, centre to centre was 5mm. This distance proved to be the only critical measurement. In order to accommodate the varying spine widths it is necessary to keep the distance between the slots to a minimum.  It is not possible to allow for every eventuality and difficulties occur when trying to match the gap between the wedges to the width of the book's spine. If the distance between the slots is any wider than 5mm it leads to an inability to support the boards of the open book adequately. 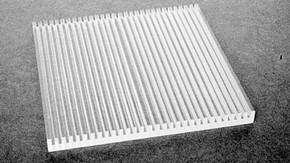 The prototype cradle proved an immediate success. Both of the above mentioned drawbacks were resolved. The original concept of dividing the cradle into two composite parts had been further refined and simplified. The use of the wedges as the means of supporting the boards of the book remained, but now they only just slotted at their fore-edge into the base support. This solved the difficulties that had arisen when trying to match the combs to the wedges. The single block is visually less intrusive. The block sits below the book making it more discreet than the combs and generally one size fits all. The chosen size of the block was deemed appropriate for most situations but it is necessary when displaying smaller books to cut the block into quarters. The single block is also more stable than the slotted comb method. 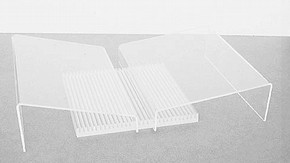 This latest design has now been used for several exhibitions within the Museum and for an outside loan. It is easy to work with and the measuring time for each individual book has been reduced to 15 minutes. The setting up of the cradle is very straight forward, only requiring a correct match between the slotted wedges and the spine width, and the cost of the block is less than that of the original comb design. The blocks can be reused while the Perspex wedges are made by the Museum Joiners to fit each individual book. The design of the wedges will allow for an up stand if required.

A detailed description of the specifications and steps for using this method are held at the Institute of Paper Conservation.

Thanks to Helen Shenton, Roy Mandeville, Fiona Mackinnon and everyone at Design Animation.

Shenton H., Developments in the display of books at the Victoria and Albert Museum, The Paper Conservator 21, pp.65-79.