Photography in a New Light 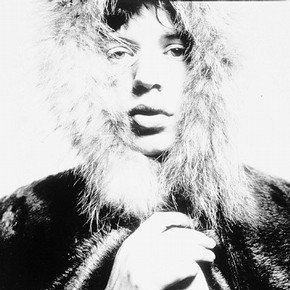 One of the images from the inaugural show in the new gallery. Mick Jagger, photographed by David Bailey (Museum no. PH.165-1983). Copyright David Bailey. (click image for larger version)

The V&A's new Photography Gallery will open on 21 May 1998. If the museum ground plan were thought of in terms of real estate or a Monopoly Board, the gallery is in a prime location - Park Lane or Piccadilly. It is in the heart of the Museum on the ground floor, beside the temporary exhibition galleries. In fact, the space - Gallery 38 - was one of the exhibition galleries, most recently used for the first room of the Larsson show.

This is a large, barrel-vaulted gallery of 350 square metres. We are very grateful to the Director and the CMT for making this handsome location available to us. The Director's gesture of support for photography as a creative medium has been reciprocated by a sponsor who has come forward to support the gallery, details of which will be announced after this article goes to press.

New photography galleries were opened last autumn at two museums which are very like the V&A in many ways (not including their funding) - the Metropolitan Museum of Art in New York and the J. Paul Getty Museum in Los Angeles. The Met's new space was well received when it opened last year, with fibre optic lighting for its early daguerreotypes (on hard-to-see polished silver surfaces). Their new gallery is smaller than ours but the Met has built up one of the greatest of all photographic collections, particularly in recent years. Like us, their emphasis is on photography as a creative medium. The Getty's space is more comparable to ours. It opened with an exhibition on Capturing Time, which show-cased the Getty's unrivalled collection from the origins of photography to a masterwork by David Hockney from the 1980s.

Our situation is more like the Getty's than the Met's because Los Angeles did not previously have a space where the story of the history of photography was available on museum walls in a central location. New York City, on the other hand, has offered such a valuable resource for the past four decades thanks to the Department of Photography at The Museum of Modern Art. Their Photography Gallery is where many of today's curators, including me, first saw the history of photography treated as a serious discipline. Where in Europe can one go to see a history of creative photography? At present, I can't think of anywhere. So, the V&A's new space will be used in two ways. It will be both low-key and high-tech, in the style of the Museum's own chief designer Brian Griggs.

The gallery will be divided by a central spine wall. Off that will be a series of spur walls that can be configured in different ways to accommodate a variety of displays. Visitors entering the gallery will see, first, a pleasant seating area to the left with copies of museum publications - such as the newly-published Photography: An Independent Art. Photographs from the Victoria and Albert Museum 1839-1996. In fact, the exhibition of this book is the first show. Visitors will proceed along the left-hand (West) side of the gallery, following a chronological photo-history. The story continues back down the right- hand side of the space. Like the book, this inaugural show is divided into eight sections. The final section is titled 'Fond wrestlers with photography', a phrase used by the late Helen Chadwick to describe her own use of the medium as an artist who liked photographic effects while loathing the fetishisation of photographic equipment and technique. Chadwick's tour de force from 1986, The Oval Court, will be shown in this section: to make this extraordinary installation she used computers, photo-booth snaps, photocopies toned blue, and five spheres coated in real gold leaf.

Helen Chadwick was among a group of well-wishers and advisors who  helped nurture the Photography Gallery in its protracted development. Other generous helpers include the photographer and co-founder of The Photographers' Gallery, Dorothy Bohm, the writer and Reith lecturer, Marina Warner. Our outside assessors in the early days of the project were Dr David Alan Mellor of the University of Sussex and the critic Sarah Kent of Time Out.

The first show will be up for six months. Thereafter, we will normally show the history of photography section - including a strong contemporary component - for a year at the time. Each year we will also show two special exhibitions from the collection. The first is  Henri Cartier-Bresson: Elsewhere. Photographs from the Americas and Asia. This is part of our salute to HC-B who due to celebrate his 90th birthday this August. The V&A owns 400 of his works. After that, from May 1999, we will feature Lady Hawarden (1822-65) to mark the publication of the first scholarly monograph on her work.

What do we hope for from the Photography Gallery? We believe we are -thanks to our colleagues in Conservation Department - setting new standards in the presentation of fine photographs. Each print is individually assessed in terms of mounting. We are also custom-framing many of the contemporary items. We plan to have both excellent lighting and a new labelling system. We will be using electronic programmes in the gallery from November as part of our range of educational initiatives. We will show the best of photography in a new light to a large new audience.