The Conservation and Mounting of a Jinbaori

This article discusses the conservation, mounting and preparation for display of a rare and unusual Japanese object. The Jinbaori evolved in the late 16th century as a surcoat worn over a full suit of Samurai armour. Originally a purely functional garment intended to keep the wearer and his armour dry, it developed into a symbol of personal taste and power, with expensive, exotic textiles and unusual materials being used in the construction and design. It is recorded that Jinbaori were worn into battle. 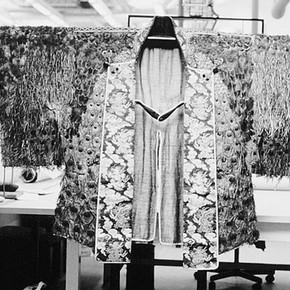 This Jinbaori (Samurai c.1700-1800. FED 628-1905) incorporates both Japanese and Chinese silks. The ground silk is of Japanese origin and is worked with metal threads and decorated with peacock feathers. Tail, wing and body contour feathers have been used. The collar and front reveres are stiffened. The back of the collar and reveres are Chinese silk as are the backs of the fastening tabs. The lining of the collar, the shoulder bars and front panels of the fastening tabs are of black velvet. The collar is stiffened with paper which was visible through the damaged area of the collar lining before this was repaired (Figures 1,2).

Different styles of Japanese braiding and cording were used as decorative trimmings. Horn buttons were used to fasten back the reveres and the garment was lined with a silk fabric which was woven throughout with peacock feathers, giving it a strange 'shot' (2-tone) appearance. At the centre back of the garment was a Kanamono (an ornate metal plate) on which the Agemaki (a decorative bow) hangs. Although covered in feathers, the other elements incorporated and method of construction make this a heavy item of costume. 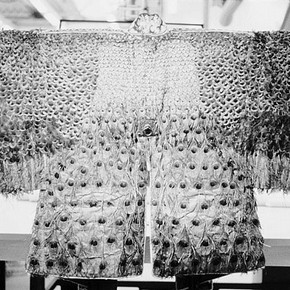 This garment had been in the collection since 1905 but it was only recently that its true significance had been established. It had been previously described as a theatrical costume for an angel and had been confused with the costume worn by the principal actor in the Noh drama Hagoromo. It came into the Conservation Department in the early 1990's for boxing and packing as part of a project to improve storage conditions, as there was concern that the feathers were disintegrating and the costume was being damaged. There was no opportunity to research the garment or to carry out any conservation to it at that time.

For storage the robe had been interleaved with acid free tissue and folded along its length twice. Each fold was padded with a roll made from polyester wadding covered with cotton fabric to support and cushion each fold. It was then placed in a purpose made acid free box lined with tissue, and covered with more tissue. It was taken back to the Far Eastern Department for indefinite storage.

In 1997 some kimono were examined with a view to including them in the next Toshiba Gallery rotation and an opportunity became available for a curator to research the robe and to include it in the Gallery display. It was at this point identified as a rare and important Jinbaori. Now required for gallery display an opportunity was available for conservation to be carried out.

The Jinbaori was clean and generally sound in overall structure but there were some small areas of weakness to the Japanese ground silk of the body. Many feathers were bent and out of alignment on the Jinbaori. Some had their structure disrupted and shedding fronds. The silk velvet on the collar lining and fastening tabs had degraded and split, and the velvet used as an edge binding on the collar had degraded and fragmented and in some places fallen away.

Conservation and Preparation for Display 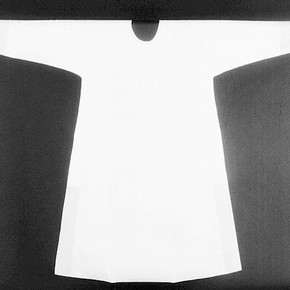 Although a certain amount of remedial conservation was necessary to this object, the primary concern was to give adequate support to the heavy Jinbaori whilst it was on display. Much work has been carried out over the last few years into the display of heavy Japanese Kimono and Chinese Robes and a method has been worked out using a substantial purpose-made Vilene support, tailored to the exact shape of the object and covered in silk (Figure3). The final covering of a smooth silk is important, to allow the support to slide easily into the object concerned. The whole assemblage may then be hung on a strong metal T-Bar kimono stand. Vilene ™ is a heavyweight, non-woven, bonded, inert polyester fibre material which is readily available through most outlets of furnishing fabrics.

This basic method is simple, inexpensive and readily adaptable for the different shapes, sizes and styles of these garments and has become the standard way of mounting this type of object for long term display. The 'shot' irridescent silk and feather lining of the Jinbaori was unusual and of particular interest, so it was requested that any method of support must not obscure this from view when the object was shown from the front. It was therefore decided that the Vilene ™ and silk support would have to be made in two halves, and a section inserted into each separate sleeve and front to support the garment equally. Once the pattern had been taken and the two parts had been made they were covered in a dark blue habotai (soft, lightweight, plain weave silk), chosen so the colour would blend with the object if any small part of the support should be visible when viewed from an acute angle (Figure 4) 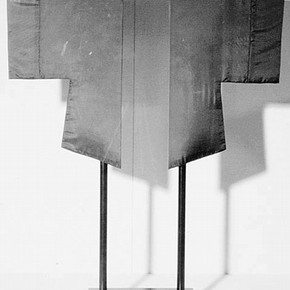 Figure 4. Support mount made for the Jinbaori (click image for larger version)

The first part of the remedial conservation was to repair the damaged velvet elements. Silk habotai and a very fine nylon net were dyed to colour match using Lanaset ™ (a range of  metal complex and reactive dyes of proven fastness). The fragmented edge binding of the collar was carefully unpicked on one side only to give access to the back of the velvet lining. Dyed habotai cut to the collar shape was inserted behind the velvet, and the velvet was couched through onto this using a fine polyester thread. The fragmented edge binding was reset in position and covered with the net which served to support and hold the fragments in place and finish the edge of the collar. The velvet on the tab fastenings was also couched onto habotai. The button which would have held the tab fastenings closed  across the front of the garment was missing, so a simple silk-covered button was made and sewn in place. The original button would most likely have been horn and similar to those that held the reveres back to the shoulders.

It was decided that only the most damaged of the small areas of weakness on the Japanese ground fabric would be repaired as these were more cosmetic rather than structural. Where necessary these were couched through to the interlining which was one of the layers of construction. 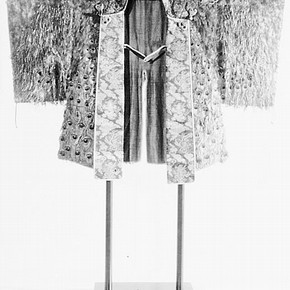 Attention was then turned to the disrupted and damaged feathers. Feathers are a keratin material; a term applied to chemically related protein materials such as scale, hoof, horn, nail and feathers. The amino acid composition is complex, but within the morphology adjacent protein chains associate with each other through hydrogen bonding. Most hydrogen bonds are disrupted at temperatures within the range of 40-60 C which is why steam is most successful at relaxing keratin materials. It was therefore decided to lightly steam the feathers and to gently manipulate them by hand as they relaxed, in order to straighten and re-lay them in their appropriate configuration on the garment. It was possible to re-attach some of the shed fronds to the larger feathers. These were relocated onto the feather shaft from where they had broken away and adhered with a small spot of Mowilith 50 ™ in acetone, mixed thickly and used in the manner of a contact adhesive. It was not possible to re-fix the smaller feather fragments.

Once the conservation was complete, the Jinbaori was slid onto the support mount and stand taking care to avoid any further disruption to the feathers. It is currently on display in the Toshiba Gallery of Japanese art (Figure 5).

I should like to thank Greg Irvine of the Far Eastern Department.