The New British Galleries at the V&A 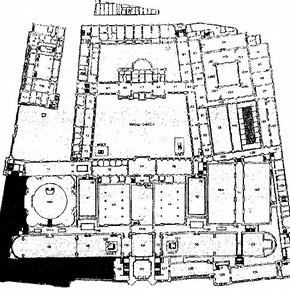 The renovation of the British Galleries at the Victoria and Albert Museum is the single largest display project undertaken by the Museum for fifty years. The fifteen galleries involved, including narrow back rooms currently used as furniture stores, are themselves the size of many substantial museums and cover roughly 10% of the Museum's entire display space. Access to all floors of the Museum will be dramatically increased by the introduction of two new lifts, one at each end of the galleries.

Nearly 3,000 objects will be displayed, representing every aspect of the Museum's wide-ranging collection.  The difficulties of renovating existing museum space and the challenge of presenting such a wide range of objects have contributed to the high cost of the project - around £32m - a  large part of which is being sought from the Heritage Lottery Fund. The Museum has set itself a tight schedule: to close the current galleries in July 1998, and to reopen them at the end of 2001. The aim of this article is to outline some of the distinctive qualities of these ambitious new galleries, and how those characteristics are being pursued through the design process.

How will our new British Galleries be different? Expertise in objects may be taken for granted in the V&A.  What we know less about, and yet know to be crucial to the success of these galleries, is our audiences. They are certainly varied, from tourist visitors who may speak no English to school children and family groups, as well as specialists and students. Audience research into the ways museum visitors learn is being carried out, and the results fed back into the design process by educators working on three gallery teams. We are particularly interested in responses to the first phase of the new V&A Silver Galleries, opened to great acclaim in 1996. What is well established is that some people prefer to learn in museums from a practical 'hands-on' approach while others are more interested in starting from a theory and applying it. Traditionally the V&A has presented displays for analytical learners -  those who learn by thinking and watching, and who look for facts and intellectual comprehension -  but has offered less for others, such as those who like to try things out for themselves or who look for personal meanings in objects. The new Galleries will attempt to provide for all learning styles.

We want to create galleries which are beautiful and welcoming, a place for enjoyment and learning.   For such a large museum space, we strongly believe that variety is required, with changes of pace and presentation.  Some displays will offer grand, elegant spaces, others will invite the visitors to look closely at a single intriguing object, or to enjoy a dense display of, say, tea-caddies or mezzotints.  Atmospheric and glamorous displays will give free reign to the imagination of visitors, as perhaps in a recreation of the Norfolk House Music Room as a space into which visitors can enter, and where, occasionally, they might enjoy live music, as its original occupants did in the 1750s. Other spaces in the gallery will be reserved for naturally-lit comfortable seating, teaching space for school-groups, or such necessities as stores for maintenance.

Variety of design will be complemented by variety in the questions raised by the displays. Within a chronological framework the galleries will consider key issues in the history of design over four centuries: what was new; who decided what was good or fashionable in art and design; and how visual styles such as 'Rococo' or 'Gothic Revival' developed.

One of the great benefits offered by a project as large as this is the opportunity to develop themes right across the period: for example how, between the sixteenth and late nineteenth centuries, Britain changed from an importer of high design goods to a producer, consumer and exporter of such goods, developing in the process the native skills which led to Britain becoming the workshop of the world.  Some visitors will be surprised to see objects imported from abroad and others made by foreigners in England, but the key influence of foreign goods, from Europe as well as Asia and the Islamic world, is a necessary part of the story of the development of British design.

Audiences and design are key concerns, but it is unique objects that will sustain the new galleries. Three gallery teams have spent two years working with individual departments searching through and sifting the V&A's unparalleled collections. The vast lists of potential objects for display (especially for the eighteenth and nineteenth century galleries) are currently being refined down to around 3000 objects of all kinds and sizes, from the grandest tapestry to the humblest bodkin. There will be anonymous artefacts and  pieces by most of the famous names of British design, from Grinling Gibbons to William Morris; and from the most famous workshops, from Mortlake to Elkington's. 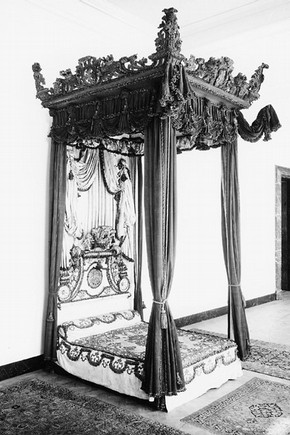 Many will be much-loved favourites such as the Great Bed of Ware or Bashaw the Newfoundland dog, others will be new acquisitions such as Canova's Three Graces. Some will be pieces which have been in the V&A's collection for many years but which we have been unable to show. One great sadness of the last few years has been the gradual removal of textiles from the present galleries, due to mounting levels of pollution in these spaces which front Cromwell Road.

The great state bed made in London in the 1690s for the Earl of Melville, is just such a piece, upholstered with its original crimson silk Genoa velvet and white Chinese silk damask. With highly sophisticated casing allowing close control of temperature, humidity and air-cleanliness, it will once more awe visitors, together with a splendid array of textiles of all periods. The selection process is wide ranging and involves not only designers and specialist curators, but the V&A's Conservation and Science sections, and historians skilled in documentary research.

The period rooms which have been such popular exhibits in the old galleries will also be reconsidered. Some will not be returning; the Sizergh Castle room will be returned to its original location (now in the care of the National Trust); others, such as the Hatton Garden Room , have turned out to be less authentic than originally thought. Those which do return to the galleries will be given a sense of architectural integrity. Rather than continue the three-sided, stage-set approach, we will restore the fourth wall of certain rooms, either with their original elements (Norfolk House Music Room) or with a suggestive approach. Visitors will be able to walk into most rooms through the original doors, as used by the original inhabitants.

Period rooms are one category of objects that can be said to 'speak for themselves' in that they  offer a sense of decorated space which visitors enter to experience. Many objects cannot, of course, be entered or handled directly, but visitors undoubtedly enjoy more and understand better those objects that they are specifically invited to reconsider. The new galleries will include several series of interpretive devices, placed next to the objects to which they relate, for visitors to try themselves. These range from a video that shows how an object was made, to a practical exercise reconstructing  the elements of a replica object; from an activity asking visitors to spot the difference between objects and their imitations (perhaps an Indian shawl and its Paisley equivalent), to an audio programme retelling the story depicted on an object. 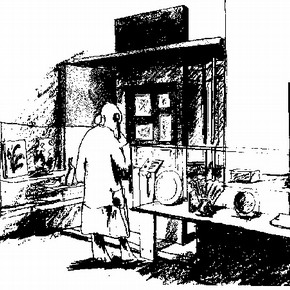 A variety of methods will provide information about orientation, so visitors know where they are and what is available. Study areas will allow visitors to use the Museum's new automated catalogue, CIS, giving information about the collections and about designers and the places where objects were made and used. Most recently, a number of prototype interpretive devices have been produced by gallery educators working with conservation and curatorial departments. These were made to demonstrate our ideas on interpretation to the Heritage Lottery Fund, and are now being tested to see how well they work and last, and what visitors actually gain from them. The lessons learned will be fed back into object selection, interpretive plans and the detailed design of all fifteen galleries.

The British Galleries are the Museum's major priority in the coming years. A large team, of V&A staff and outside consultants, is working on the project. This includes a design team of interior and exhibition designer Dinah Casson of Casson Mann, architect Alistair Gourlay of GA Associates and interior design consultant David Mlinaric. V&A staff right across the Museum are contributing to the project. All are working towards a new kind of V&A gallery, one which will engage, delight and enlighten our visitors.