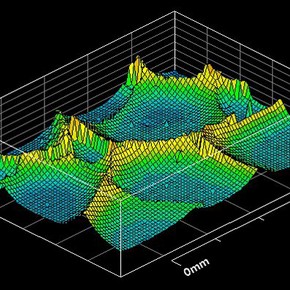 Figure 1. An image from an optical interferometer showing the development of surface features on a severely crizzled glass (click image for larger version)

For seven years, the Conservation Department of the Victoria and Albert Museum has collaborated with the Department of Materials at Imperial College, to investigate the causes of, and possible treatments for glass disease. Glass disease, also known as glass sickness or crizzling, had been identified as a major conservation problem for the Museum after extensive surveys by the Ceramics and Glass Conservation Section in 1988 and 1991-2, prior to the development of the new Glass Gallery. To explore the impact this collaboration has had on the treatment of crizzling glass, it is first necessary to review the nature of glass and the reasons it may suffer from this serious problem.

Glass is a term that can be applied to many different materials, but is usually taken to mean silica-based amorphous materials. Glass objects are commonly formed from a mixture of silica (SiO2), the alkali oxides soda (Na2O) or potash (K2O), and alkaline earth oxides such as lime (CaO). Such glasses are often referred to as 'soda-lime-silica' or 'potash-lime-silica'. Other elements may also be present, usually at lesser levels. The proportions of silica, alkali and alkaline earth may be varied to form glasses with different properties; a high-silica glass will tend to have a high melting-point (and hence be hard to work at moderate temperatures).

Increasing the amount of alkali chemically disrupts the silica network, and lowers the working temperature of the glass. Historically, furnace design and economic considerations have limited the temperature at which glass can be worked, and so it was necessary to formulate glasses having lower viscosities at moderate temperatures. This required adding increased amounts of alkali oxides to the formulation but while this is successful in lowering the viscosity, these 'high alkali, low lime' glasses also suffer from poor chemical durability.

This poor durability manifests itself in a number of ways, but one of the most distressing is crizzling. A crizzled surface will become covered with minute surface cracks, which over time will grow and penetrate the whole body of the glass and lead to its physical collapse. Before cracks are seen to form, the initial stages of the processes may be identified by the production on the surface of the glass of a wet surface that feels 'slippery'. Droplets of moisture may be seen to form and these droplets lend the term 'weeping' to glasses exhibiting this behaviour. This wetness occurs at higher humidities (usually above approximately 50% relative humidity). When the humidity falls, the surface can dehydrate, and crystals may form on the surface of the glass.

As the glass dehydrates further, moisture can be lost from the sub-surface layers of the glass itself and it is this cycle of hydration and dehydration that occurs during environmental fluctuations which leads to the formation of surface cracks. The surface swells as it absorbs moisture, and shrinks as it loses moisture. The effect can be seen in figure 1 which shows an image of the glass surface taken with an optical interferometer, capable of high resolution three-dimensional surface imaging. The swelling of the surface has caused the surface to 'buckle' and rise in ridges along the line of the cracks. 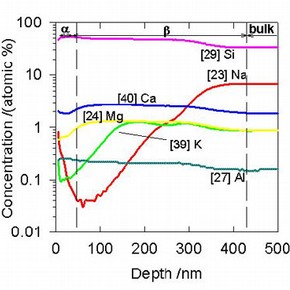 In order to treat glass sickness, or prevent crizzling from occurring, it is important to understand the chemical processes involved. This was the thrust of the work for the first period of the project1. The Department of Materials at Imperial College has a number of analytical techniques that are particularly suited to the study of these very slow corrosion processes. Secondary Ion Mass Spectrometry (SIMS) and Atomic Force Microscopy (AFM) in particular offer excellent methods for these investigations2. SIMS can be used to analyse elemental concentrations as a function of depth and possesses a vertical resolution of under one nanometer3. The technique also has a very wide dynamic range and can measure elemental concentrations ranging from parts per hundred to parts per billion. This corresponds to a concentration range of 107.

SIMS depth profiles have shown that the thickness of the depleted layer, ß, corresponds to the amount of ageing the glass surface has undergone. Thus, it was found that SIMS could be used as a direct comparative measure of the degradation experienced by the glass. This, in turn, could be used as a measure of the efficacy of conservation treatments. The behaviour of the surface can also be viewed directly with an AFM4. This technique allows for high-resolution imaging of the material surface. Figure 3 shows an AFM image of a corroded glass surface. By studying the changes in  the surface as corrosion progresses, we can directly estimate the amount of corrosion occurring on the glass. Again, this is very important when it comes to measuring the efficacy of treatments.

The treatment of crizzled glass may take a number of routes, using either chemical alteration of the near surface layer, or of the surface itself. Initially,  the use of aqueous solutions of multi valent ions as a means of restoring lost chemical durability to the glass surface was investigated5.The ions (such as aluminium) diffuse from solution into the surface of the glass, where they form bridging bonds between disparate silica units. SIMS may be used to directly follow the diffusion profile of the ions into the glass, as well as determining the difference in corrosion rates between treated and untreated glasses. 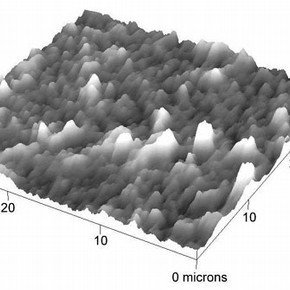 While the application of aqueous ions alters the chemistry of the subsurface, the second phase of the project focussed on the use of  monofunctional silane compounds to provide protection to the  surface itself. These are designed not as coupling agents or consolidants, but to provide chemical protection at the surface, with a single molecular layer. One end of the molecule binds to the glass surface, while the other is made hydrophobic so it repels water. This has been used to retard the rate of corrosion by a factor of ten in short-term accelerated ageing. The coated surface is stable against desorption and hydrolysis, but further in situ tests are needed to ensure the long term photochemical stability of the treatment.

The past seven years have been particularly successful in elucidating the causes and effects of crizzling, and offering a possible treatment for objects with this condition. Particular emphasis has been placed upon the novel application of surface science techniques to problems in conservation. The successful collaboration between the Victoria and Albert Museum and Imperial College has helped to ensure that glass has a sparkling future.

The Department of Materials is always keen to develop new research collaborations. David McPhail may be contacted at