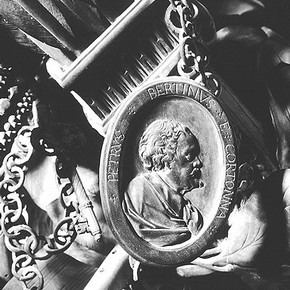 After many years of hoping, and several more of planning, a large number of works by the 17th century woodcarver, Grinling Gibbons, will be gathered together at the V&A this autumn. Gibbons' carving can be found in palaces, churches and country houses throughout England. The easily recognisable cascades of lifelike flowers, fruit, foliage and birds, carved in limewood, are too delicate to be moved on a regular basis. This exhibition is likely to be the first and last occasion for many years where so many pieces are shown side by side.

The star of the show, a large piece (1701 x 1346 x 330 mm) commissioned from Gibbons by Charles II as a gift for the Duke of Tuscany, is not resident in England. Known as the Cosimo Panel, it is on display at the Pitti Palace in Florence, Italy. This article describes the discussions and actions that were necessary to ensure that the star could be in London, unharmed, for the opening of the exhibition. It is a measure of the confidence in those thoughts and deeds that this article was written before the panel began its journey.

We believe that, as borrowers, we should be confident that an object is fit to travel to us. It took visits by three conservators and a packer to convince us that we could safely ask for this large, complex and delicate panel to be moved across Europe. We also believe that we should not encourage interventive treatments that are only necessary to enable an object to travel. If an object could remain on public view without treatment, and not deteriorate, then as a general rule we would avoid intervention. We had to discuss the treatment we thought the object needed as an issue separate from the desire to borrow the panel. Money was available for conservation but we did not want to appear to use this as a bribe to facilitate the loan.

The panel has gone through a rough time in the last fifty years. It was severely damaged during the Florence floods in 1966 when it was buried in mud. After a two year restoration treatment it was put on display where it suffered minor damage from a leaking window. Later it was installed in the Pitti Palace where a gas heater in the room exploded. This resulted in scorching of much of the surface and charring of some of the finer detail. During several years on open display some further mechanical damage had occurred, especially to delicate detail. Several links of the chain had become detached. 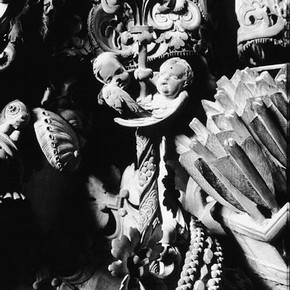 The panel is hung in a room with thick stone walls, marble floors and heavy wooden doors. There is one North-West facing window which is usually shuttered. It was easy to believe the prevalent view that the panel had become accustomed to a stable environment much more humid than the proposed exhibition space. Electronic data loggers were left in the vicinity of the panel.

Over a period of nearly two years the environment was shown to have fluctuated as wildly as any uncontrolled gallery at the V&A. The data told us that the object had withstood many much greater fluctuations than we intended to expose it to, and had not equilibrated to a high moisture content. This turned out to be the case at the locations of other proposed loans in England. We were thus not worried about transfer to a stable environment between 45 and 55% RH.

We were still concerned about the possibility of a plant failure in the exhibition space which in mid winter could lead to humidities below 20%. Since the wood is not painted and generally not constrained, given the recent history of the carvings even this calamity should not result in irreversible deformation - in theory. However we were keen not to test the theory. Airtight display cases would have provided the necessary security but were not thought appropriate to the exhibition of material designed to be part of large decorative schemes. The solution was to check that systems to register deviations from specification would be acted on immediately, that replacement parts were on hand and that emergency humidification back up was available.

Although there was a great deal of discussion about treatments to return the scorched surfaces to their original light colour, and some desires to correct the misplacement of parts during the 1967-68 restoration, these ideas were rejected as being too interventive. There were a few detached pieces that needed reattachment. There were sections that moved which were not designed to move and needed securing. There was concern that as long as the object remained on open display at the Palace it would need to be dusted and occasionally handled. It was felt that some of the charred details were not sufficiently robust to withstand this forever. A search was made for an appropriate consolidant that would strengthen sufficiently without darkening or adding gloss.

Per Hoffmann, research scientist and head of conservation of archeological wood at the German Maritime Museum, Bremerhaven, tested a range of consolidants for us. Six materials, including cellulose ethers, acrylics and poly(vinyl butyral)s, were assessed for degree of consolidation, visual acceptability, reversibility and ease of application. The success of the consolidation process was tested by drawing filter paper at a standard pressure across uniformly charred fluted beechwood rods. The degree of rub-off for each sample was compared to the others and to that from an unconsolidated section. The visible acceptability was tested on limewood samples shaped to expose a range of angles to the grain.

Although the aim was to consolidate only the charred areas, it was predicted that a low viscosity solution would spread uncontrollably on a raw wood surface due to capillary forces. It was necessary to ensure that there was no change to the appearance of uncharred surfaces affected by the treatment. The final recommendation was for a poly(vinyl butyral), of a medium degree of acetalisation, dissolved at 2-3% in ethanol. The treatment was carried out at the Pitti Palace by David Luard. He is a conservator with experience of both Grinling Gibbons and fire damaged surfaces, having worked on limewood carvings rescued from the fire at Hampton Court Palace. 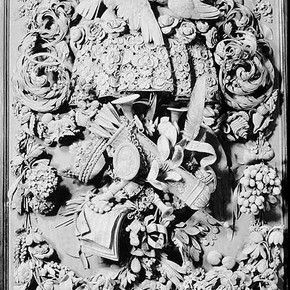 The final question was how to transport it, the biggest puzzle being whether it would be safest on its bottom edge, its side or its back. It would be easier to move the case through doorways if the panel were packed in a vertical plane. On its side rather than upright would make a more stable case, easier to handle. Some of the carved detail such as the feather is connected at one end only and by a very thin section of wood.

If the panel were on its back and received a vertical shock there might be sufficient moment to snap the joint. Yet again, transit on its back is the only way that pressure from packing materials on the fragile carved detail could be avoided. This is the orientation that was chosen. It will travel on its back, in a case, in an environmentally controlled air-ride vehicle.

I was unable to determine whether being consumed by a fire in the Channel Tunnel or immersed in water in a sinking ferry was the greater risk. The Cosimo Panel probably has sufficient experience to overcome either.

'Grinling Gibbons and the Art of Carving' , an exhibition at the V&A from October 22nd 1998 to January 24th 1999. A book of the same title by the curator of the exhibition, David Esterley, is available from V&A Publications.