The Novels of Charles Dickens; Bound to Last? The Structural Evolution of a Manuscript's Bindings 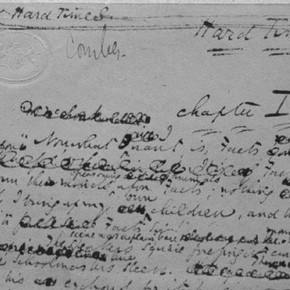 The National Art Library at the Victoria and Albert Museum holds the manuscripts of 12 of the novels by Charles Dickens. A condition survey carried out by the Book Conservation Section in 1991 identified these 38 volumes as amongst the most valuable items at greatest risk.

The resulting treatment initiated to stabilise the physical condition of the manuscripts is the third binding the leaves have undergone in approximately 125 years 1 . The manuscript leaves were written over a period of 33 years, from Oliver Twist in 1837 to Edwin Drood, which remained unfinished on Dicken's death in 1870.

This paper will aim to trace the physical and structural development of the manuscripts from the visual clues that still remain, as a means of illustrating some of the preservation concerns of the different generations responsible for their care.

From visual clues it is possible to deduce Dickens's working method. Dickens wrote his novels in iron gall and/or blue ink on one side only 2  of single sheets of good quality, handmade, writing paper. Consistently two types of paper, probably cotton rag, were used for the main body of the text 3 , and were originally purchased as folds of paper. He would tear between one and five sheets down the centre crease, place one pile on top of the other and commence writing. We know this because the cleanliness of the torn edge indicates that he tore the paper prior to writing on it. His writing method is very consistent throughout all the novels. He began the text at the very head of the page and covered almost the entire sheet in script leaving no margins, so to tear the sheet after completion would threaten a great deal of work.

The physical nature of the leaves indicates Dickens had a good knowledge of the printing and publishing process. The sheets bear much evidence this: inky thumb prints, printers' names. Writing on only one side of the sheet made for easy division of the text amongst the compositors. The leaves have been cut or torn for distribution amongst the men. This physical evidence would seem to indicate that once the sheets were set to type, the manuscript version had little significance for the printers. This was not the case however for Dickens and his lifelong friend John Forster to whom he bequeathed the manuscripts.

There is little documentation concerning the first binding of the manuscripts, so all the information stems from the visual clues found within the binding remnants. The manuscript leaves were mounted onto folds of pre-cut, thin, handmade paper by the application of adhesive to each vertical edge. The reverse of the manuscript leaf was completely obscured by this thin support sheet. The support sheet is approximately the same size as the manuscript leaf but slightly wider at the spine margin to provide an excess for use in binding. Sewn on recessed cords with a tube hollow and laced on boards, the binding was half covered with brown calf skin and marble paper sides. 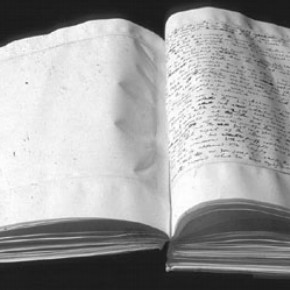 Forster bequeathed the volumes to the South Kensington Museum, where they arrived after his death in 1876. It is unclear what prompted the Museum to undertake the complete rebinding of the 20 ms. volumes into 38 new volumes 90 years later. Documentation does not establish just how degraded the bindings had become. The purpose of this second binding seems to have been to provided a handling edge - an extension of paper around the leaves by which the  pages could be turned without direct handling - even though there are no signs of readership damage.

For the second binding the Victorian binding was pulled and the manuscript leaf with its attached support leaf were removed and adhered, as one, into a frame of medium weight machine made paper. The framing paper was prepared in folds with one manuscript leaf and its attached support sheet to each leaf of the fold. The folds, with the manuscript leaf in position were then pressed, gathered into sections and sewn through the spine bolt onto recessed cord sewing supports. The binding has a tube hollow and is half covered in brown goat skin with cloth sides.

As a direct result of this rebinding and the methods used to mount the leaves, severe tension and cockling was set up across the face of the ms. leaf. Where these tensions coincided with areas of  the ms. paper already weakened by iron gall ink acids, the paper was forced to split when the pages were turned, and in severe cases losses occurred. The bindings themselves were still in near perfect condition and showed no signs of deterioration either chemical or physical.

The categorisation of these items as unstable, in the '100 Best survey' in 1991 4  prompted the setting up of a project to treat and rehouse all 38 volumes of the 12 novels. A treatment, it is envisaged will ensure the manuscripts remain protected for the foreseeable future. A comprehensive and well constructed approach to both the binding and mounting method will, it is hoped, provide a stable environment within which the rate of deterioration both physical and chemical is reduced to a minimum. 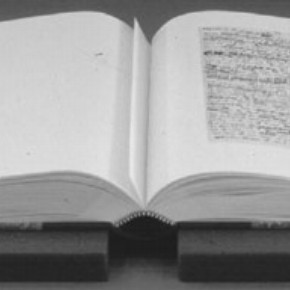 A comprehensive description of the individual treatments involved in the Dickens project  can be found in previous documentation. 5

The starting point for the rebinding of the manuscripts was a structural and condition survey of  all the 6,184  leaves closely examining all the deterioration they had suffered. An assessment of the extent of that damage and the likelihood of further deterioration under any new conditions imposed on the leaves helped to form the treatment proposal.

The major causes and types of deterioration were found to be:

Of these three factors, the physical damage caused by the tension in the leaves was judged to be contributing most to the manuscripts' deterioration. Rectifying this would make the major contribution towards creating stable conditions for prolonged access to the manuscripts.

The decision to rebind the manuscripts again in volume format was considered to be the most comprehensive way of achieving suitable conditions. Several other options were assessed but eventually rejected.

The 1990s conservation rebinding is similar in appearance and structure to those it succeeds. Choice of materials and structural style was specific with regard to necessary function of the volumes.  Half bound in red goat skin with marble paper sides, they draw heavily on the appearance of the first binding. The sections comprise three folds of buffered 160gsm Rag Endleaf paper, sewn all-along on four evenly spaced linen tape supports. Tape supports and a tube hollow spine allow the pages to lie flat when the book rests open. 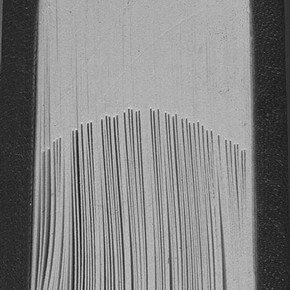 The ms. leaves were parted from their original support leaf and removed from the 1966 binding, and humidified using damp blotters in a Gortex sandwich to remove the cockles. Treatment of  the leaves was kept to a minimum and no attempt was made to arrest the chemical deterioration for fear of endangering important bibliographic evidence. Areas of paper severely weakened by ink acids were physically supported with methyl cellulose in IMS and buffered Japanese tissue.

The new blank text blocks were assembled and bound. The handwritten leaves were mounted onto the blank support leaves by folded Japanese tissue guards which run the entire length of the leaf spine edge. An appropriate number of blank support leaves had been incorporated into the new binding and were cut from the text block as the leaves were secured to compensate for the added bulk of the manuscript (see figure 3). Sufficient margin around all four sides of the ms. leaves ensure that there is no need to handle the leaf directly when turning the page. The wide spine margin guarantees that the new support page, not the ms. leaf, bares the strain of flexing when the when the book rests opened. Japanese tissue corner straps ensure that the leaf is held firm and supported at all times during reading.

The enclosure of the leaves within a stable environment was felt to provide optimum conditions for long term care, so the bindings are housed within permanent drop-spine book boxes lined with MicroChamber® paper; designed to absorb atmospheric pollutants. The previous bindings had shown little signs of wear to the leather and the combination of pollutant free environment and restricted reader access is felt to be sufficient precaution against rapid breakdown of the leather covering.

Each of the bindings is a product of its time and demonstrates the preservation and conservation concerns of each individual and era that has been responsible for their care. From the physical clues within the remaining binding structures it is possible to surmise much about the type and function of the objects and hypothesise about the concerns that prompted those structures. But it also leaves many questions unanswered. For instance; what prompted the choice of binding structure for the original binding?

Was the use of a support sheet some kind of barrier against the corrosive qualities of the iron gall ink, or were the inadequacies of the alternative structures, such as guard books already recognised? Were the similarities between the first and second binding intentional? Why did the second binding treat a damage type (handling damage) that from the evidence does not appear to have caused much damage. Was there an assumption that damage was something that happened to an object rather that being inherent within it?

It is hoped, now the profession has reached a level of maturity, that the careful selection of quality materials and appropriate mounting and binding techniques will enable the manuscripts to bear the inevitable demands of readers, exhibitions and digital information recording without the need for any further interventive treatment. As the previous two bindings are consigned to a storage box their connection with the leaves becomes more tenuous; information and memories are lost and binding fragments become degraded. Recording the details of the bindings from this primary evidence, by observation, where no previous documentation exists becomes a responsibility even if that documentation is restricted by the concerns of the age in which it is made.

This article is an abridged version of a paper presented at the 1998 Conference of the Society of Archivists. It is to be published in full at a later date.

1. The novels were first bound by commission of their owner, John Forster in the 1870s. The second and third bindings took place whilst the manuscripts have been in the care of the Museum during the 1960s and 1990s.

2. Cancelled text and corrections can be found on the reverse of approximately 530 manuscript sheets. See Low,A.,  'The Conservation of Charles Dickens's Manuscripts' The Paper Conservator, Vol. 18 1994, pp.5-10.