Ranjit Singh: The Lion of the Punjab 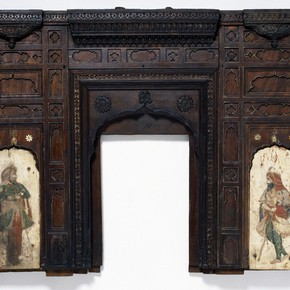 During the preparation for The Arts of the Sikh Kingdom it was decided that the architectural model of Ranjit Singh's tomb was to be displayed. An examination of the object was made, and a decision taken that only three of the facades would be exhibited, as the other components are not contiguous.

Architectural models were made in India throughout the nineteenth century, often for display at national and international exhibitions. This model replicates the imposing tomb, or samaohi, built to commemorate the 'Lion of the Punjab', Maharaja Ranjit Singh. Located in Lahore, the mausoleum was designed in a mixture of Hindu and Muslim architectural styles. Completed in 1851, the exterior was faced in chunam, a lime plaster polished to resemble marble; on either side of the central doorway (north front), two life-sized reliefs stand guard over the royal shrine.

The interior decoration was an exotic eastern style; convex mirrors reflecting light on the walls and ceilings, illuminating the Muslim and Hindu painted scenes. This model was previously displayed at the 'New Museum' of the Indian Museum in London when it opened in 1858, but, sadly, was severely damaged in a fire at the Museum Annexe in 1885, although it had previously been on display at the Indian Museum in 1880.

A detailed condition assessment was made in the Furniture Conservation studio to reveal the extent of the damaged timber, as well as discoloration resulting from the application of a darkening surface coating which had accumulated surface dirt. We have to assume that this impregnation and darkening of the timber was done to achieve a more uniform colour over the object. The polychromed panels also suffered discoloration from soot, leaving the images less distinct. However, it is fortunate that the burnt material is confined to the lower areas where it is charred and friable, leaving most of the object generally in a stable state. 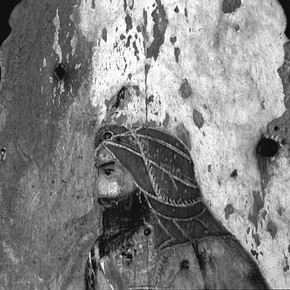 Figure 2. Detail of one of the polychromed panels during conservation. Photograph by Nigel Bamforth (click image for larger version)

The treatment of the model covered two differing areas; the architectural model and the painted panels. FTIR spectroscopy tests were carried out by Science Section to try and identify the substance previously used to impregnate the timber. It had been suggested that linseed oil was possibly present, but ultimately the tests revealed that it was shellac, which had been used. Solvent tests were also carried out, and ultimately the use of a 20% solution of IMS in de-ionised water was the most effective.

This was applied on cotton swabs to remove the surface grime and restore the polychrome outline surrounding the low relief carving. Treatment of the burnt and charred timber required a consolidant that would be flexible, whilst allowing for changes in environment when on exhibition and later on loan. A 10% solution of Butvar B98 in a mixture of 60% IMS and 40% toluene was selected, and this was applied with a sable brush until the required saturation was achieved.

The two polychromed panels which are nailed into recesses on either side of the central archway also required attention. Advice was sought from both Nicola Costaras, Senior Paintings Conservator, and Mike Wheeler, Senior Paper Conservator. There was considerable flaking and lifting of pigments on both panels, as well as a build up of dirt and soot, especially on the proper right panel. This panel was also split. Attention was given first to the flaking and lifting material. This was mainly consolidated with 10% Aquazol in de-ionised water, although the most unstable flakes were adhered with a more viscous solution of methyl cellulose, applied with a sable brush.

The split timber was glued with Helix animal glue and held in place. The polychromed surface was now stable enough to gently clean with saliva applied with cotton wool swabs. The soot particles proved more difficult to release from the surface, so a solvent solution of 5% tri-ammonium citrate in de-ionised water was applied with a cotton wool swab, then rinsed with de-ionised water. This removed about 20% of the blackened surface, making the panels visually acceptable.

Analysis of the polychromed panels was undertaken by Hannah Eastwood, Conservation Scientist, to try to gain an understanding of the materials used in their construction. Small samples of the white ground were taken; these revealed the application of three layers of pigments, with an extender of carbonate: 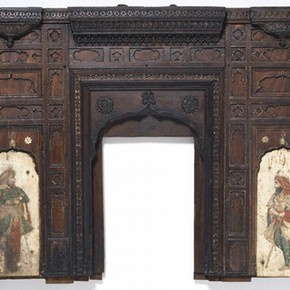 Figure 3. The central element of the main façade after conservation. Photograph by Nigel Bamforth (click image for larger version)

Samples of the rust coloured pigment were also taken for analysis. This colour was composed of numerous pigments, presented in a crystal-like form; orange, white (opaque), black, pale yellow. The pigments are perhaps vermilion with traces of ochre. Further XRF tests would help to identify the pigments.

Decorative carvings, both in ivory and in timber were missing from above the doorways. It was decided to manufacture replacement for these carvings, as their loss impaired the overall aesthetic impact of the object. The carvings were cast in Tirantis 'pigmented' clear casting polyester resin 405 710, and then adhered in place.

Although it is still quite evident that the model has had fire damage, it is now stable and suitable for exhibition, as part of the powerful and turbulent history of the Sikh nation.