The Artificial Patination of Bronze Sculpture 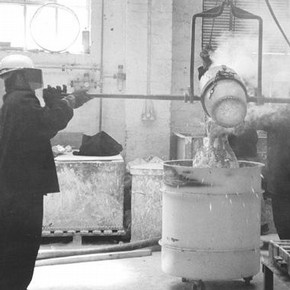 Figure 1. Bronze samples being cast in the foundry of the RCA Sculpture School. Photograph by Lyndsey Morgan. (click image for larger version)

Prior to undertaking this MPhil research project I was a sculpture conservator at the Tate Gallery, where I became interested in the colouring of bronze sculpture. Whilst at the Tate I had seen examples of sculptures on which patinas were changing and degrading but it was difficult to determine the causes as so little research has been published on this subject. The aim of the project is to find out about the chemicals and techniques used in artificial patination and then, more importantly, to discover what happens chemically at the surface when they are applied.

Artificial patinas are applied to bronze using chemical solutions which react with the surface to form a thin layer of coloured corrosion products. Patinas can be transparent or opaque and are sometimes applied in a number of layers to produce widely varied effects. Patination has been used as a decorative technique on metals by many different cultures for thousands of years.

However, the development of patination as we now know it on bronze sculpture probably began around the time of the Renaissance when it was primarily used as a means of conferring the appearance of antiquity on a sculpture. Traditionally, therefore, sculpture has been patinated in varying shades of browns and greens in imitation of the colours which form naturally on bronze exposed to the elements.

The techniques for colouring bronze expanded in the late nineteenth century to encompass a wider range of colours and surface finishes. During the twentieth century the trend has been to move away from the more traditional colorations and to develop a new language of colour on the surface of bronze for a modern generation of sculptors. It is now possible to colour bronze chemically in a huge range of shades.

The artist's involvement in the choice of patina for their sculpture varies. Some artists leave the decision to the patineur in the foundry whereas others supervise the process closely or even learn to patinate themselves. There is no doubt, however, that the colour of a sculpture is an integral part of its artistic intention. It is known that artists such as Barbara Hepworth and Henry Moore were very specific about the contrast and arrangement of patina on their sculpture. It is less easy to gain information as to how the sculptor felt about the ageing of the patinated surface over time.

If a sculpture is displayed outdoors it will inevitably tend towards natural brown and green corrosion products. Sculpture conservators sometimes consider restoration to the artist's original concept when a sculpture has been badly damaged, but this can be difficult or impossible to attempt where insufficient documentation about colour and pattern exists. I therefore also wanted to address the problem of accurate visual documentation in my research in order to find out what techniques were available to enhance those presently in use.

The approach I have used is to investigate the chemical recipes and techniques used in patination through a diverse range of sources. This began with the published literature and was followed by a series of interviews with patineurs in foundries around Britain. This was undertaken with Kirstie Reid, another research student on the Conservation Course, who is studying modern methods of patination from an artist's point of view. We were also able to interview some of the older generation of patineurs who were no longer practising but had worked with established artists. This has helped to give us an insight into the development of foundry practice and patination techniques in the later half of this century. 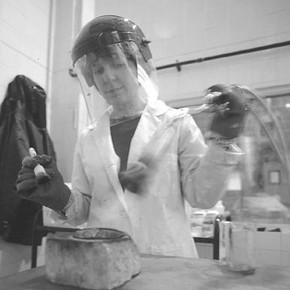 In gathering this information I was aiming to acquire enough knowledge to attempt simple patination of bronze myself. Initially I was able to get useful practical advice from Richard Rome at the RCA sculpture school where I made use of the well equipped patination room funded by The Gabo Trust for Sculpture Conservation. I also attended a very interesting summer school about patination methods led by Andrew Lacey at AMTeC.

During the summer last year I took part in the re-patination of a large outdoor bronze by Barbara Hepworth which is owned by the Tate. The sculpture had been badly damaged in a storm whilst on display at the Yorkshire Sculpture Park. Prior to this it had acquired a patina from years of outdoor exposure which was a uniform green colour.

The necessity for welding to take place to repair the damage meant that this patina would need to be removed in a number of areas. Because of the difficulty involved with getting an exact match with the outdoor patina using artificial patination methods, the decision was taken to re-patinate the work completely using as a guide colour photographs taken in the 1960s when the sculpture was newly patinated.

The photographs revealed that the original patina had been a combination of clearly defined brown and green areas which were applied to highlight the contours and inner and outer spaces of the work. During my work there I learned a great deal about the day-to-day activities in a foundry and was able to learn the techniques of patination more thoroughly. I found the collaboration with the foundry on this project to be very valuable and felt that I could approach the problem from a more informed standpoint as a result of my research.

After this I was had a range of bronze samples cast at the RCA foundry (Figure 1) so that I could begin patinating them using rigorously documented methods (Figure 2). This included recording the process of patination in detail whilst documenting the temperature of the metal, the pH of the patinating solutions, and the relative humidity and temperature of the patination room. These samples will be subjected to various analytical techniques to investigate which are most appropriate for characterising patinated surfaces.

Although a great deal of research has been carried out on 'natural' patination processes on outdoor bronze and archaeological bronze, there seems to be almost none relating to these artificial patinas. I am lucky to have had access to staff and equipment at Imperial College through the Conservation Course. So far, the preliminary results of the first analyses using x-ray diffraction have been interesting and unexpected. I hope to confirm and expand on these results using the technique of Scanning Electron Microscopy (SEM) with an Energy Dispersive Spectrometer (EDS)

I was also able to learn the techniques for taking metal sections with Anna Bennett of Conservation Technical Services. I hope to use this technique to investigate the morphology of patina layers and to see whether it is possible to distinguish different patination chemicals and application methods.

Finally, a second cast of textured bronze samples has been made in order that I can patinate them using a range of common patination techniques. The purpose of this is not so much for analysis as to provide a set of visual reference standards which can be built upon over time. This will be transferred to an image database via calibrated scanning so that it can be used in sculpture conservation departments as an aid in the documentation of bronze surfaces. I hope that the combination of these methods will lead to the beginnings of a greater understanding of patinas on all types of bronze objects and ultimately to take steps towards the analysis of unknown patinas.

The MPhil research project described in this article is generously supported by a grant from the Gabo Trust.