The Function of a 'Fetish' Figure 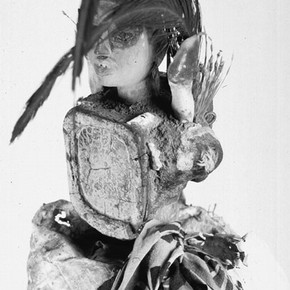 The title of this paper refers to a nkisi power, or 'fetish', figure (Museum No. 13.33) that has been conserved prior to being included in the re-display of ethnographic artefacts at the Horniman Museum. The object is from the Congo in central Africa; it was accessioned in to the collection in 1913 but was probably made sometime during the 1800's. The purpose of this paper is to discuss what the object was used for, what its various components are, and to question whether, as part of the museum's collection, it has lost some of its meaning, which in turn may affect the intervention of the conservator.

Although such objects are frequently called 'fetish' figures, referring to the fact that they were believed to have magical powers or that excessive devotion was paid to them, this is an entirely European term and evolved from a condescending misinterpretation of African civilisation.

Locally-produced objects were sought by Europeans as souvenirs and curios of what was viewed as the 'primitive barbarity of Africans'. Picture postcards were also available depicting ceremonies and customs, which promoted the theory of fetishism and terms such as idolatry, devil-worship and evil-doing. The Kongo people refer to such figures as nkisi, or minkisi in the plural.

Minkisi come in various forms. The most common feature is a pack attached to the back or the abdomen of the figures which is usually covered with a mirror. It is this pack, and other attachments, which provide the figure with its function. It was the nganga, or priest, who operated the nkisi and ministered its powers to others. 1  The priest would order a wooden figure from the carver and then endow it with its power during a ritual at which time medicines or magically-charged materials were attached. The empowering substances could be inserted into cavities on the head or between the legs, as well as behind the glass plates. In addition to carved figures, objects including shells, horns, cloth-bags, gourds and clay pots were used as containers for this material. 2

What was attached to the figure was determined by the powers to be associated with it. The nkisi could be empowered to be a figure of ill-omen or of benevolence which protected against sickness or dangerous spirits. With its attachments the figure is imbued with an empowering spirit also known as nkisi. Nkisi is conceived as a power emanating from the unseen world of the dead, an omniscient force which is otherwise inaccessible to human perception. 3  In being persuaded into taking up residence in a particular contained space, it can then be manipulated by the nganga.

When a client required the use of the nkisi, a further ceremony was performed by the priest. An appropriately empowered figure was selected, and through chanting, singing and dancing, the nkisi spirit would be called upon to act. Clients could also add small packets containing hair, fingernail clippings, shreds of clothing or other relics to remind the nkisi of the particular problem or of the person to curse or protect.

Figures could also be anointed with the blood of chickens which were sacrificed as gifts to the nkisi. This was thought to make the nkisi aware of the violence that could be expected of it. The purpose of the mirrored glass was not only to seal the medicinal pack but also to reflect back the gaze of the viewer, completely concealing what lies behind. The mirror symbolises the nkisi spirit's ability to see the human world and the inability of humans to view the underworld. The glitter of the mirror was also believed to frighten witches and evil spirits away. 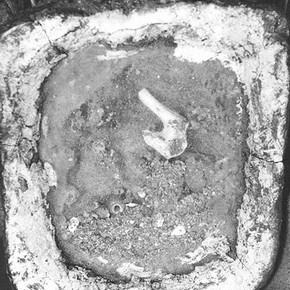 Behind the glass plate on the back of the Horniman figure (Museum No. 13.33,) are red glass beads, a small bone or tooth, and granular material which is possibly grave soil or gunpowder. Value was often given to foreign imported materials such as mirrors, gunpowder, cartridges and nails (Figure 2). The Horniman figure has many attachments. These include feathers, hooves, grass-seeds, bells, textile, skin, woven raffia fibre, shells and teeth.

The feathers link the figure to the violence of the sky; winds, rain, thunder, lightning, and fire, and to the diseases of the upper body, head, neck and chest. The shells are durable - houses of creatures that were once alive, and are synonyms for long life. The teeth are probably human teeth and suggest the ability of the nkisi to attack its victim. The bells are associated with chiefship all over central Africa and indicate the power and authority of the figure. Bells were also put on dogs and symbolise the nkisi's ability to hunt its victim.

Textiles that were attached to the figures were often strips from the client's clothing, and personalised the request. A further underlying idea of the attached feathers and strips of cloth or skin was that they would flutter during the dance that was part of the ritual, which would help to suggest spirit possession. Raffia cloth was formerly used as currency and one of the reasons it was attached was to identify a thief.

If someone had money stolen and the thief was unknown, a raffia cloth was attached and the nkisi would know whom to seek out and punish. Such cloths were also attached to hide the nakedness of the figure as it was considered among the greatest insults to stare at the buttocks of minkisi. Skin or leather that was attached was often the skin of animals that served as the diviners' familiars.

Nkisi figures are complex objects that offer an endless variety of interpretations within a certain framework of ideas. However, no definitive reading can be made of such figures, as many of them are undocumented. The rituals for which they were constructed are no longer performed. Therefore, most of the ritual - the words, songs, gestures, costumes and the state of mind of the client - are no longer accessible to us. All that survives are the mute objects - some now damaged by the process of collection and storage. Some figures may have been altered because they were thought to have been indecent and not suitable for public viewing. Many other figures had their attachments removed by collectors who were more interested in the pure form of the carved figure.

This preference for the sculpted figure was an impoverishment of the figure in itself. The nkisi figures were never intended for art or public display in a museum. The intention was to create a visual effect in the context of ritual use, heightened by songs, drumming, and dancing. Information for the storage of the nkisi after the ceremony, which would have been provided by the priest, has also been lost. Some were intended to be kept in a specific kind of basket, or in the roof of the client's house. Such information was often not recorded when the object was collected.

This loss of meaning and altered context restricts interpretation of the object, and the function may not be fully understood. Conservators of ethnographic objects, unless they themselves are from an anthropological background, or do their own research, are very much guided by the curator as to the likely history of an object and how it should ultimately look after treatment. Once given that information it is very often a case of minimum intervention when it comes to conserving an object.

For example, although this object has few surfaces or materials that would merit wet cleaning, this was not considered because of the fact that libations such as the chicken's blood or other substances may have been poured over the figure and now form part of the history of the object and should not be removed. It is important to have respect for the original function of the object, and as it may not at first be obvious what that was, research and curatorial collaboration are essential.

With thanks to Louise Bacon, Head of Collections Conservation and Care, and Anthony Shelton, Keeper of Anthropology, at the Horniman Museum.