The Indian Vase Carpet Fragment: Decisions and Discussions Prior to Conservation 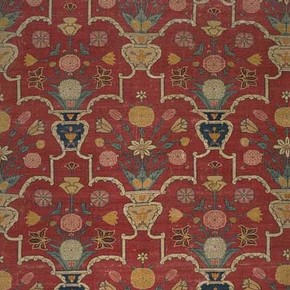 The Victoria & Albert Museum acquired a rare and beautiful carpet fragment in 1930. Museum records describe the carpet as a fine Mughal carpet thought to have come from the Amber Palace near Jaipur. The carpet was made in Lahore for the apartments at Amber built for the Raja Jai Singh I between 1628 and 1658. The carpet belongs to the finest class of Lahore carpets woven during the development of Mughal art, the period of Emperor Shah Jahan. Later records describe the carpet as 'unquestionably of the utmost value to designers and students.'  (see figure 1)

This Indian carpet fragment was initially requested for a major exhibition of carpets called 'Flowers Under Foot' 1  at the Metropolitan Museum of Art in New York. This exhibition of Indian carpets was held last year to celebrate 50 years of Indian independence. A loan request for a large textile can cause consternation as the conservation work required to make the object fit for display will be considerable as was the case for this carpet.

There was a lengthy negotiation period when the carpet was inspected on a number of occasions by the head of studio, Lynda Hillyer, and myself to establish an initial outline of the work required and the likely costs. A full condition report was made which determined that six months work including solvent cleaning and a full conservation treatment of the carpet was considered essential.

A considerable amount of time was devoted to discussing ways in which this lovely object could be made ready for loan, the outcome being that the conservation of this carpet was not possible within the existing work programme of the textiles studio for the American exhibition. The decision not to lend was not made lightly. Ideally we would have liked to have approved the loan and carried out the necessary conservation work on this important museum object. The carpet was, however illustrated and included in the exhibition catalogue. 2  It was described as 'Fragment of a carpet with pattern of lattice and flowers incorporating vases. Northern India, Kashmir or Lahore, ca. 1650.'

When the carpet was requested a second time for an exhibition at the V&A, and as a rotation object for the Nehru gallery, the previous condition report was extremely useful. 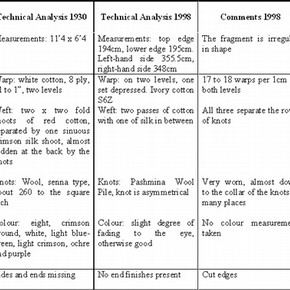 Table 1. Comparison of carpet structure in 1930 and 1998 (click image for larger version)

The carpet was at first sight in fairly good condition with a strong design and very bright colours. Closer inspection of the carpet however revealed that the overall condition was in fact quite poor. There were loose warps on both the front and back of the fragment, which had sprung away from the pile.

Every time the carpet was moved the amount of fibre shed from the wool indicated that the carpet was brittle and would not be able to withstand repeated handling. This was a major reason for not allowing the carpet to go on loan, as the carpet would not survive the repeated rolling and unrolling required for a loan exhibition.

There were numerous worn areas and a substantial number of holes. The cut edges were weak and frayed. There were several stained areas and the fragment was dirty. There was evidence of paint remains on the edges and several areas of painted warps. This large carpet fragment had been cut down from a much larger carpet, which presumably would have had a border, now entirely missing. Further inspection also revealed that there were several repairs made from cut pieces from another part of the original larger carpet. 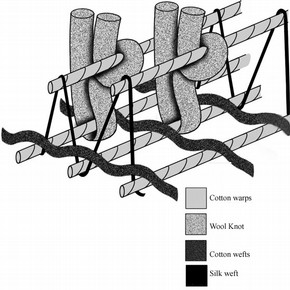 The design is a repeating pattern of trellis with vases and plants. Size of repeat: 75cms x 66cms, (29" x 26"). This design description was made by Mr Tattersall who, along with Kendrick in 1922, produced one of the first comprehensive books on carpets as well as making the analysis of this carpet weaving technique. 3  Further work done on the technique was carried out by May Beattie who referred to a group of carpets of similar construction as 'vase technique'. 4

The vase technique refers to a structural design, not necessarily to a figurative design even though this is also the pattern in this case. There are some differences in the actual technical analysis of this fragment and the group to which Beattie refers but there are also many similarities most notably the cotton and silk wefts and the densely packed knots. (see figure 2)

There are three passes of weft after each row of knots. The first and third are of wool, which is quite tightly woven, the second or middle weft is of a sinuous pass of silk thus dividing the warps into a definite upper and lower layer. Over time the worn surfaces of the carpet show characteristic parallel warps when the second weft of silk breaks and the two planes spring apart. It is obvious that the two planes of warp allow a carpet to be densely knotted but the fine second warp, which is prone to breaking, means that there is an inherent weakness in the structure.

The original condition report and estimate of time required for conservation allowed for the carpet to be given a full treatment including solvent cleaning at a facility outside the museum. A variety of methods for display were discussed including a sloping board with the fragment attached by Velcro on three sides or a conventional wooden batten secured to the wall with Velcro used on the top edge only.

The actual conservation treatment has varied slightly from this outline plan.

Several tests were carried out in the studio using a suction table where white spirit was applied with a brush locally to the stains. There was a slight reduction in the intensity of the stains but complete removal proved impossible. There was also no appreciable difference in the visual appearance of the wool pile. It was therefore decided not to go ahead with the scheduled solvent cleaning treatment at The Textile Conservation Studios at Hampton Court, where a larger suction table may be hired for such treatments. The carpet received a thorough surface clean using a variable suction vacuum cleaner with small attachments. This removed a considerable amount of surface dirt and dust and more ingrained particulate soiling. 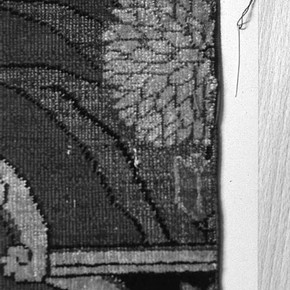 A detailed diagram was made of the damaged areas which helped in the decision-making for either a full linen scrim support or patch repairs. The sprung warps on the reverse of the rug were considerable and had to be realigned before any further work could be carried out. The repairs were carried out using a curved needle and a laid couching thread of polyester. Once this was completed, the decision was made to use support patches.

Samples of cotton rep were dyed to match the ground colour of the carpet and the best match used to dye sufficient material for the proposed patches. The cotton rep was chosen because the ribbed appearance of this weft faced fabric looks well behind worn areas of the carpet. The patches were placed behind areas of weakness where there was partial loss of warp or weft and pile loss. Patches were also placed behind other areas where there were gaps tears or holes.

Using the same dye recipe as for the rep, linen tape was also dyed for use around all the cut edges of the fragment. When applied to the edge with a small blanket stitch this formed a gentle rolled edge which protected the raw edges which stopped further unravelling or pile loss. The carpet was then lined with curtain lining incorporating a little fullness in the fabric to avoid any puckering on the rug whilst hanging.

As there proved to be insufficient space in the exhibition to have the carpet on a sloping board it was decided that the carpet would have to hang vertically. Velcro was sewn on to tapes which were stitched along the top edges and a little way down the side edges to give the carpet more support when hanging in the exhibition (see figure 3).

Comparison of estimated time with actual time taken for the repairs

The original estimate was based on someone working full time over a six month period on a contract. I carried out the work as my main project for 1998 from February through to November. The carpet was not worked on all the time but ran concurrently with other projects in the section. The conservation took approximately 500 hours. Whilst the conservation work carried out on the carpet enabled it to hang vertically for this exhibition, it is not a long term solution for display as a gentle slope or flat on a plinth would be preferable. The conservation of one major object can take  a very long time.