A Brief History of Mounts 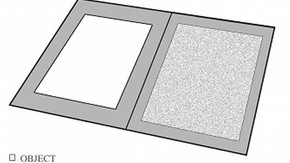 A standard mount for a two-dimensional object consists of two pieces of Museum Board1 . One has an aperture (window) cut out of it and the other is the backboard. The two are hinged together along the long edge to produce an overthrow mount, opening either right to left if portrait, or bottom to top if landscape.

The current refurbishment of the British Galleries will take both historical and contemporary mounting techniques into consideration when deciding housing styles. The correct type of display is important for enhancing an object, ensuring its safety and for engaging the viewer.

The Museum Board mount, as illustrated in Figure 1, is one of the most popular systems used within museums and galleries to house two-dimensional objects. Mounts enhance the object but primarily provide a safe carrier. If the correct mount is employed it will provide full protective housing and allows the object to be handled, framed, displayed, stored and travel safely2 .

Historic mounts can be regarded as part of the object they accompany. The mount not only enhanced the drawing but was seen as an extension of the creative process of the artist or the collector. During the sixteenth century, collectors stored their collections between the pages of books. This not only protected the work but also provided plain borders around the artwork which collectors began decorating with washlines, watercolour wash panels, gilding and drawings (such as scrolls and nameplates) to enhance the object.

Washlines were deliberately repeated in tones complementary to the drawings in an attempt to soften the hard edges of the mount and to make the drawing and the mount a unified flat decoration. This presentation technique was adopted and adapted by other collectors, leading eventually to what is known as the 'back mount'. The back mount was made either by the collector or a craftsman and the object was attached to a piece of paper/board cut larger than the object. The borders were then decorated.

The back mount was seen as a support that would strengthen the drawing and was a uniform size to compliment the rest of the collection. Collectors would show their objects to visitors and the back mount provided the necessary protection from viewers' hands whilst the decoration indicated the collector's enthusiasm and flamboyancy.

The standard mount (bevelled aperture and backboard) was introduced around the 1800's. The
introduction of mechanised printing techniques and increased distribution saw a boom in the print trade. Prints initially had an ephemeral quality, pinned to walls and replaced when old and worn or when bored of subject matter. When prints began to be framed, dealers would design elaborate borders to exaggerate the importance of the object. Standard sizes were adopted by printmakers and framers. It was not until the end of the 18th century, with the advent of heavier printing techniques, which commanded heavier gilt frames and even more elaborate mounts, that prints began to rival oil paintings and became more acceptable as works of art in their own right.

The Victorians introduced the idea of a wider border of mount along the bottom edge. This was because pictures were usually hung high on walls and it was argued that if the object was mounted centrally, the lower border would appear narrower than the rest of the mount. Fashion has traditionally played a big part in decoration. Gilt mounts were very popular in the late 19th Century. They could be produced with little effort yet made the person buying the object feel that they were getting a more ornate, fancier product.

Likewise, in the mid-20th Century, there was a fashion for fabric covered mounts and coloured board mounts. Unfortunately, some of these fashionable methods chosen by collectors resulted in the deterioration of many works of art usually due to poor housing materials.  Poor quality mount boards can lead to acid burn and some types of adhesives used to attach objects to mounts often produce staining.

Most objects mounted in the V&A are housed in standard size cream or off white mounts. Decorations, annotations, coloured mounts etc are only added if it is part of the bequest or at a curator's request. Historical mounts are kept with their object when ever possible. This may mean lining the old mount if it is very acidic to create a barrier from the mount to the object. Conservation Mounting and the Department of Prints, Drawings and Paintings in the V&A have a collection of historical mounts for reference.

1. 100% cotton, acid free board.
2.  Some objects are safer in another means of storage after exhibition and may need to be removed from their mounts to be rehoused in alternative methods of protection such as folders, encapsulation and melinex sleeves. This is usually due to lack of space.