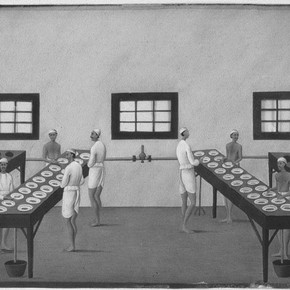 The V&A has a collection of about seven hundred paintings on mica originating from India which include examples from Murshidabad, Patna and Benares in eastern India and from Trichinopoly in southern India. Most of the examples at the V&A date from the mid- nineteenth century. Popular subject matter included Hindu gods and goddesses, religious events, trades-people and flora and fauna of the sub-continent. The majority of these paintings were produced in standard sets for the colonial tourist market. They imitated paintings on glass, which were popular in Europe and were also used in India by artists for preserving tracings of their family paintings and to decorate glass for temple lanterns 1 .

The paintings from Trichinopoly are small in size (120 x 90 mm) and are painted on one side of very thin, flexible sheets of mica. A particularly interesting series from Patna dating from 1860 show the production of opium, (Figure 1).  These are painted on slightly larger (160 x 200 mm) thicker sheets of mica and are painted in thick watercolour on both sides of the transparent support. The mica paintings were identified as a priority for treatment and re-housing in a survey of works of pictorial art in the Indian department carried out by Paper Conservation in 1994.

Mica is a transparent mineral composed of  complex mixtures of potassium silicates. The variety of mica used most frequently by these Indian artists is Muscovite (H2KAl3 Si04)3 which is found widely throughout south India. The mica is formed between strata of granite and the transparency of the material is a result of the heat and pressure created between the layers of rock during formation. Mica consists of many interlocking platelets, resulting in a laminar structure which can be split easily  into thin sheets.

Mica presents many problems as a support for painting on due to the smooth surface as this  provides very little key for the paint to adhere to. Examination of  a sample of the paintings on mica in the V&A has revealed a variety of painting techniques, but little or no preparation of the mica prior to the application of paint. The pigments used were mixed with  varying quantities of binding medium and thickly applied with a brush. In a few instances paint has been brushed on to both front and back surfaces of the mica sheet to increase the opacity and give a more three dimensional appearance to the painting. The relatively thick nature of the applied paint implies that the artists did not necessarily intend the paintings to be viewed by transmitted light.

Considerable damage has occurred to these mica paintings as a result of the way in which they had been previously mounted and stored. Small blobs of adhesive had been used at the corners of the paintings to attach them to sheets of thin card. The smaller paintings were mounted together in pairs and the front of each sheet was wrapped around the back and secured with self-adhesive tape. The mounted paintings were then crammed into three filing cabinet drawers. The creation of the new Indian Study Room in 1989 allowed for extended, on-site storage for Indian objects and gave the opportunity to act on the findings of the 1994 survey.

The  adhesive used to attach the paintings to the old mounts had discoloured considerably causing unsightly brown marks at the corners of the mica. There were some instances of cracking or de-lamination due to the movement of the card in response to changes in humidity causing the mica attached to it to bend. De-lamination of the mica, which results in a loss of transparency, may also occur as a result of careless handling and this may account for the damage observed on unmounted objects. Mounted objects were more prone to complete fracturing of the mica in areas where it was attached to the card, whereas unmounted objects showed signs of slight de-lamination around all of the edges. 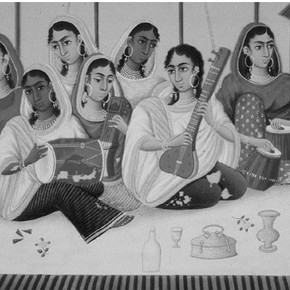 Most examples in the collection have some paint losses, (Figure 2). Distortion of the mica sheets had caused detachment of the watercolour from the smooth surface of the mica. The relatively large proportion of gum arabic medium and any humectant added may have rendered the paint layers more or less hygroscopic. Differences between the paint layers could cause peeling and paint loss. In addition the paint layer may have been damaged by the cellophane covering material sticking to it, exacerbated by the heavy compression during storage.

Before embarking on the consolidation of the paint film two different consolidants  and treatment strategies were tested. The lack of adhesion to the mica support and between paint layers necessitated the choice of a consolidant with  low viscosity, but reasonably high strength. The two chosen consolidants were 5% (w/v) Paraloid B-72 (ethyl methacrylate/methyl acrylate co-polymer) in acetone and  2 % (w/v) isinglass (fish glue) in water to which a small amount of Industrial Methylated Spirits had been added. The relative gloss of the consolidant films at this degree of dilution was not considered a problem, as the solution was being applied to areas of loss and lifting flakes, rather than being applied over the surface. Two or three brush applications were usually sufficient to anchor unsecured flakes of  paint.

After each application the area was covered with thin, non-woven polyester (Bondina™) and a strip of felt and weighted down to help re-adhere flakes. When Paraloid B-72 was used, excess was removed from the surface of the paint with acetone on cotton wool swabs. Surplus isinglass was harder to remove without disturbing the paint surface. Swabs moistened with water or saliva were used for this purpose.  Paraloid B-72 was finally chosen to secure loose flakes of paint. It was selected in preference to isinglass because of its superior strength and its ease of removal from the paint surface. The treatment of a small number of mica paintings was carried out and the results assessed.

Removal of paintings from card supports

This stage was only begun once the paint film had been thoroughly consolidated. It was then possible to handle the paintings safely. This enabled the mounts to be split with a palette knife and the remaining patches of adhesive and card on the back side to be pared away with a scalpel. Remnants were then wetted locally with water and rolled away from the back of the mica. Residual adhesive was reduced with water on cotton wool swabs.

Repair of splits and de-laminated areas

Adaptations of techniques used for conventional paper repair were used to help strengthen weakened and damaged areas of mica. A slightly more concentrated solution of Paraloid B-72 (10% w/v in acetone) was used as an adhesive to repair de-laminated areas of mica around the edges of the paintings. This was fed between the mica layers using a brush and the area was then weighted down. Splits and tears in the mica were reinforced on the verso using thin clear polyester (Melinex®: 25 micron) adhered with 10% Paraloid B-72 in acetone. These reinforcing strips were cut 5-10 mm larger than the area requiring strengthening to provide an overlap. The Melinex® proved transparent enough to provide an aesthetically pleasing repair, whilst giving sufficient strength to prevent further flexing or tearing. Nylon gossamer was also tested as a repair material, but proved to be too visible due to its greater opacity when coated with adhesive.

Missing areas of mica could also be in-filled with different thicknesses of transparent polyester sheet. In the case of the paintings from Trichinopoly an in-fill of 75 micron Melinex® was inserted into a small loss with a sparing application of adhesive to the edges of the break and to the repair. This area was then reinforced with the 25 micron Melinex®, which overlapped slightly onto the verso of the mica. The lighter weight polyester was pasted out all over with 10% Paraloid  B-72 adhesive. After positioning the repair and the backing the painting was protected with Bondina® (spun-bonded polyester) and a light weight put in position to assist adherence of the layers whilst drying. 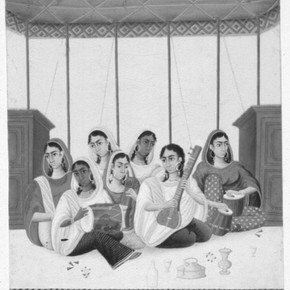 Small losses were retouched with artists pigment mixed with Paraloid B-72 dissolved in methyl proxitol, a solvent with a slow evaporation rate. This proved very satisfactory for in-painting small missing areas, especially when the retouching was applied with short hatching strokes to build up the required opacity. Compensating for large areas of loss necessitated a different approach to achieve an aesthetically satisfactory result. In such cases the re-touching was applied to a sheet of 125 micron Melinex®, which was then slipped behind the painting (Figure 3). This technique allowed the eye to appreciate the painting as a whole without being distracted by the damaged areas, but was only suitable for those paintings with major paint losses which were later encapsulated. The painting and the backing sheet with the retouching painted on it were held securely in position within the encapsulation by spot welding the polyester at the corners.

After some experimentation, three basic options were considered - encapsulation, partial encapsulation, and inlay into a sheet of Melinex® of the same thickness as the painting.  In most cases, for reasons of speed and for maximum protection of the pigment surfaces, the paintings in this collection were encapsulated between sheets of 125 micron Melinex®, which was then sealed with an ultrasonic welder. A gap of about 5mm is left between the edge of the object and the welded seam. Two spot welds are made at each corner to prevent the painting slipping inside the enclosure. This allows the edges of all of the paintings to be shown without seeing the edge of the top sheet of  the polyester enclosure.  A further advantage of this method is that it allows the accession number of each object to be incorporated into the enclosure beneath the painting in an area which is hidden by the window mount.

A technique of partial encapsulation - where the centre portion of the encapsulation is removed - has already been used successfully at the V&A for the display of fragile gouache paintings on tracing paper with very friable surfaces. It has the disadvantage that the edge of the polyester is visible when the object is positioned in a window mount, but does allow the surface of the painting to be seen without covering it.

Inlaying the painting into a sheet of Melinex® of a similar weight and thickness is another
option. The mica painting is held in position in the inlay with 5mm wide strips of 25 micron polyester, attached to the verso with Paraloid B-72 adhesive. This method is only suitable for those paintings with paint on one side only. The inlaid painting is then attached by the  top edge of the inlay to a backing sheet of a thicker, stiffer Melinex® (125 micron) to provide overall support. The advantage of this method is that the polyester does not contact the fragile paint surface, but allows the painting to be mounted back to the edge of the image.

The smaller encapsulated paintings from Trichinopoly were mounted together in groups of four in standard sized Museum mounts. These were fixed to the backing boards of the window mounts with transparent photographic corners using double sided tape (3M 415®). The larger paintings from Patna and from Benares were mounted together in pairs using the same system. In all cases the system of total encapsulation was used at the V&A because of the greater protection it afforded to the paintings and in order to have a single unified mounting system. The inlay and partial encapsulation options show promise when smaller numbers of paintings are involved. The remounted objects are now stored in solander boxes in compact shelving units in the Indian Study Room. 2

2. Visits to the Indian Study Room can be arranged by appointment