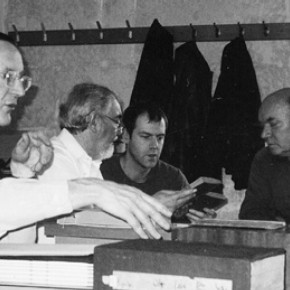 Recently I had the opportunity to participate in this one week course given by Christopher Clarkson on traditional Chinese binding structures. There were 12 participants from 7 different countries. Our work space was intimate but friendly as the joy of Chinese binding structures is that they require little space as small hand tools are used rather than sophisticated equipment.

Two field trips were arranged to the Bodleian Library. The first was to the Chinese Department, where David Helliwell, the Librarian, discussed various Chinese bindings, their history and production, and showed us examples from the collection 1 (Fig. 1). The second trip was to the Japanese Department and it allowed us to compare the bindings.

The remainder of our time was spent making samples of the various styles of bindings:

Printing was introduced during the T'ang Dynasty AD 618-916. Two pages were carved in reverse on blocks of wood - the sheet of paper being printed on one side only. The central area of the printed sheet is known as the banxin  the 'heart of the printing block' along which the sheet of paper is folded. The banxin contains information such as title, chapter, page number and a device called a 'fish tail' which allows the sheet to be folded accurately in half. The shukou means 'the mouth of the book', and is where the book opens. The leaves are held together and flex at the shunao, the 'brain of the book'. Chinese books are arranged right to left and top to bottom.

Once bound, the fascicles 2 are grouped together and encased in a protective cover, the most common being the tao, a wrap around case open at both ends and fastened using bone pegs and loops. Space restrictions meant it was not possible to make a tao, but there was a demonstration on how to cut the board edges and line and cover the joints .

The course illustrated the intimate relationship between the book structure and printing, as well as the sympathetic nature of the materials. The bindings are light, suffer little deterioration and are easily handled without damage occurring. Where thread wears, the paper screws remain to hold the fascicle together. Silk corner protectors stop the corners becoming dog-eared and damaged. The bindings are both simple and effective. The tao is an excellent method of presenting and preserving written text and is easily replaced if worn.

2 Fascicle (from the Latin for bundle) was used to describe each volume making up the whole edition.