The Resurrection of the Hereford Screen 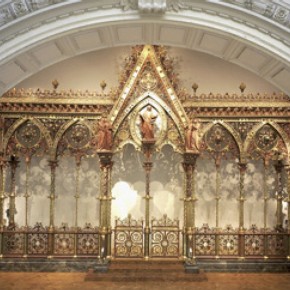 For years the restoration and display of George Gilbert Scott’s enormous choir screen from Hereford Cathedral seemed an impossible dream, or nightmare depending upon one's view. Initially shown at the 1862 International Exhibition, it was the premier example of Scott’s flamboyant Victorian Gothic metalwork. It was multi-coloured and leaf gilded and consisted predominantly of iron (wrought and cast), copper (painted) and brass (painted and polished), with upper sections of timber. Further embellishments included glass and marble mosaic panels, hard stone cabochons mounted in zinc settings and the significant figures of Christ and six angels electroformed in copper, finished with matt, red oxide paint to resemble terracotta. It was erected in the chancel of Hereford Cathedral with a few extra adornments and an enhanced colour scheme. In 1967 it was controversially removed and saved for the Nation to be displayed in the new Museum of Industry in Coventry, which never came into existence. In 1983 it came to the V&A who had partly funded the purchase and had a duty to try and find display space, time and money to conserve it. I first saw it in 1984 in our Battersea store with many of it’s filthy, corroded, tangled metal and timber components still in 1960’s packing cases. The painted and gilded surfaces at best were faded, but were mostly flaking and stained with rust. The panels of mosaics had salt formation in places, with some green glass tesserae disintegrating to a powder if touched. During the early 1990s we established that the central bridge section of the Ironwork gallery could accommodate the screen’s size and weight (8 tonnes) and would create a prominent display overlooking the Main Entrance.

In 1995 I produced an interim report on the condition of the metalwork and Richard Cook from Sculpture conservation reported on the mosaics 1 . We emphasised the need to undertake detailed examination of all parts, analysis of materials, structural assessments and test cleaning to establish a range of suitable options and procedures to ensure the scope of work could be accurately estimated. Rupert Harris, an independent conservator completed a more detailed assessment by analysing twelve different pigment samples and test cleaning several examples of painted copper and brass, wrought ironwork 2 . This was partially successful but further investigation was required. His report encouraged a conservation project and provided a summary of three main treatment options:

The appropriate conservation approach was debated and R Harris and other independent conservators produced rough estimates for the work ranging from £750,000 to £2,000,000. In 1997 a bid was made to the National Heritage Memorial Lottery Fund (NHMF), for half of the lower amount and the Museum agreed to match any forthcoming amount. The bid was successful and we received the largest NHMF award for conserving an individual object.

Ideally V&A conservators would have undertaken all the practical and investigative work but it was regrettably apparent we did not have the space, ‘manpower’, equipment or time. With colleagues in Facilities Management, Metalwork Collection and Technical Services, we appointed an independent Project Manager (Jamie Coath, from Purcell, Miller and Tritton) to assist  us in selecting the best Conservation team to carry out this undeniable challenge. Successful fundraising was underway and a completion date was set to coincide with the Victorian Vision exhibition in Spring 2001.


To get the most accurate tender bids we had to produce realistic assessments of the work the screen required:

1. How did it fit together, was anything missing and was it strong enough to support its weight?

2. Were any elements cracked or distorted beyond repair?

We identified cracks in the cast iron support columns and other physical damage and recommended specific areas be X-rayed.

3. How many different colours and layers were painted and which colour scheme should be adopted?

Evidence of extensive over-painting of the purple columns with a crude ‘gold’ paint was one indication of how the screen would have appeared in Hereford.

4. What were the corrosion products and had they caused any weakening of the metal?

I ascertained the extent of corrosion on different metal types and produced a diagrammatic scheme indicating varying percentages of corrosion on the entire screen. The decision about the level of conservation was made based on this information. Conserving every square centimetre would take years, cost more money and would likely result in an unsatisfactory patchy, dull and irregular effect. It was decided to conserve the screen to resemble it’s appearance when installed in Hereford Cathedral in 1862 with treatment that would:

The treatment proposal consisted of a combination of options 2 and 3 made by Rupert Harris:

1. Removal of surface dirt and all active, disfiguring corrosion with further loss of some paint and gilding from unstable surfaces.
2. Re-tension and consolidation of as much of the decorative surfaces possible.
3. Repair of significantly damaged or weakened parts.
4. Replacement of missing parts, unless unobtrusive or not an integral structural component.
5. Re-gilding and overpainting the entire screen except for carefully selected ‘windows’ showing parts of the original surface in better condition. These would be on the front and side returns with larger un-restored areas on the reverse of the screen. 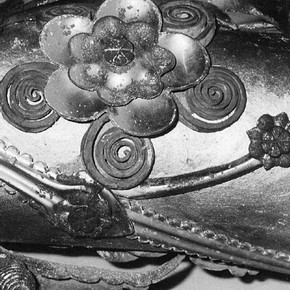 Figure 2. Detail of a cast iron column before conservation. Photography by Plowden and Smith (click image for larger version)

To determine the best treatment method for various metals, a selection of smaller, detached elements were taken for trial tests, particularly where surfaces had been badly encrusted with corrosion products. We concentrated on the copper alloys as there was contention over what finish might be achievable and how far the surface should be brought back to resemble the original.

I tried various treatments on small areas, observing which removed dirt, corrosion and any degraded, applied coatings such as varnish, paint and gilding from the metal. Additionally, I tried several restrained polishing methods to revive the polished brass and tested a number of protective coatings.

I also tentatively experimented with low power, Q-switched Nd: YAG laser to accurately remove unwanted substances. There was great potential for this method because individual layers of dirt, paint or corrosion, could be vaporised from the surface and no scratches or marks were left on the metal, as could occur with tools and air abrasives, and no chemical residues were left as can happen with polishes and chemical agents. The laser was tried on three different areas and after a few seconds, it successfully removed the dirt. It was possible to remove paint layers selectively, although it was difficult to judge the fluence levels required to take one layer off at a time.

Useful cross sections showing the layer build up were produced, and in some areas the paint was deliberately stripped from the surface. The removal of green copper, white zinc corrosion products and rust was possible, and even deposits of these responded well. However, it was not deemed a success as there was a tendency for the hardened, dense corrosion (particularly the copper) to remain in ‘islands’ and the contact with the laser beam resulted in the formation of a dark brown or purple oxide film altering the appearance of the copper or brass. This would require polishing or chemical treatment to restore the surface thus defeating the objective of a quick non-invasive treatment.

These tests enabled everyone concerned with the final appearance of the screen, to see that air abrasive cleaning with aluminium oxide powder produced the best results on the copper alloys. It was evident that a reflective appearance of the brass could only be revived if the brass was gently re-polished, which was achievable without removing all the blemishes and evidence of age.

The recommendations I was able to make, formed the basis of the conservation and restoration methodology for the metal parts of the screen.

Plowden and Smith, who successfully tendered for the project developed a very successful strategy for the systematic removal of all active corrosion combined with cleaning and consolidation of all surface areas. With sympathetic cleaning it became apparent that more of the original surfaces could be preserved than had first been anticipated. The conservation and restoration of the screen undertaken by some 40 people with the additional input from analytical engineering specialists over two years, is worthy of a book itself and I can not attempt to do it justice in the scope of this article. I will briefly summarise the methods that were used to treat the metal parts:

The painted metal was cleaned using aqueous, organic solvent and some steam cleaning. Wishtab latex sponges were used for larger areas to remove any residues of dirt.

Unstable cracks and breaks in the iron and copper alloys were repaired by either a mechanical fixing, such as screw or rivet or gas welding for ironwork, some cracks on the cast iron columns were reinforced with a steel collar. Brass and copper were repaired by brazing and soft soldering. Dents were planished or pushed out where possible. Replacement parts were closely copied from originals and made of the same materials.

The brass was the metal that was lacquered as all other surfaces were painted or gilded. It was degreased with Acetone and brush coated with a tinted Methacrylate lacquer, Trimite Gold J125. A modern alternative to the shellac coating it originally had.

A substantial percentage of the screen was repainted using linseed, lead based oil paint bound with an alkyd resin to regulate drying time. The 14 basic pigments were mixed to match the twenty original colours. With only 2 colours, yellow chromate and red lake, being substituted with modern alternatives. And isolating layer of 5% Paraloid B72 in Methyl proxitol, was applied to the original painted areas. The paint was brushed on in two layers.

The gilding was achieved in two ways, on many of the lower reaches of the screen, thick gold leaf was applied on lead based size, in other areas mica powder in an acrylic gloss emulsion was used. 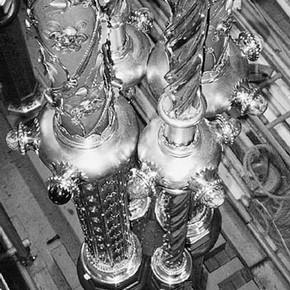 Figure 3. A cluster of cast iron columns after conservation. Photography by Plowden and Smith (click image for larger version)

The culmination of this marathon project can now be seen in the Ironwork gallery. The results are a remarkable achievement. The screen can now be seen with all the stunning effect of the reinstated colours, the subtlety of the stencil work and shading and the little quirky inconsistencies where one flower is a different colour to the others on the same panel. All faithfully followed from the original. The screen is now sound, solid and so much better understood from an art historical and technical viewpoint. The fact that this gleaming masterpiece was originally made in four months by the firm of Francis Skidmore seems even more remarkable than when I heard it stated eighteen years ago.

My gratitude goes to the many people who contributed to this project.

Cooper, M: 'Recent Developments in Laser Cleaning', The Building Conservation Directory 1997, p122-124'
Restoration of the Hereford Cathedral Chancel Screen, Manual no 3, Conservation Records of the Treatment of the Object and Techniques Adopted', unpublished report by Plowden and Smith, April 2001