The Train stops at Gloucester Road - Futures and Values in Conservation 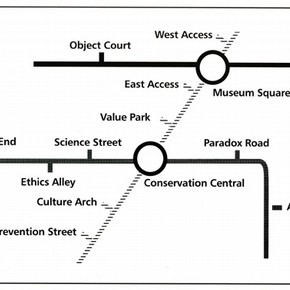 'Tube Map' of futures and values in Conservation. (click image for larger version)

For twenty years my journey to work on the London Underground ended at South Kensington. From here I walked a few hundred metres to the Natural History Museum where, in the Palaeontology Conservation Unit, I dealt with conservation problems great and small. 'Great', because natural history collections are necessarily large, reflecting nature's diversity. 'Small', because conservation is often directed at the minutiae of an object's state. (Great and small also because nature's relics can be dimensionally challenging, at both ends of the scale.)

Now, as Head of the Royal College of Art's Conservation Department, responsible for the RCA/V&A joint Conservation Programme, my train journey ends one station earlier, at Gloucester Road. From here I head for an art college rather than a centre of science but the journeys have common aims within a conservation perspective .

Conservation does not belong exclusively in the Arts and Humanities arena nor exclusively in the Science forum, but provides a bridge between them and brings a quality to both. In the Arts and Humanities it preserves objective materials which inform and enhance us. In the Sciences it provides technological and ethical challenges. At its best, conservation borrows the detachment of scientific method for cultural gain.

Perhaps conservation is more comfortable with an inclusive rather than exclusive role because conservators can always ground their work in the physical object, even when dealing with abstract aspects, such as value. Value is an area which deserves more study than it has received so far within conservation, and it should not be left to the economists alone. Value opens up many complex areas for conservation. Until a few years ago I thought there was a paradox peculiar to conservation in the natural sciences. Here the value of the object for many seemed to lie in the information it revealed, a literal and metaphorical messenger of genetics, rather than in the physical state of the object.

The object allows us to construct knowledge, and this knowledge has a its own value. As a consequence, the object may be at risk because what we learn becomes separated from, and may overshadow, it. I realised that this paradox is not unique to natural science when, at a conference discussing damage to the Parthenon Sculptures in the British Museum, an exasperated English academic scholar of Greek antiquity exclaimed to the effect that it did not matter what had happened to the surface of the sculptures, we all knew what the sculptures meant, and that remained unaltered.

What an object means is a measure of value, and conservators know that whatever action they take, whether preventive, remedial or analytical, they influence the object's value.

Conservators do not have to contend only with the same object having different values for different people, we also recognise that similar objects have values dependent on their context. Compare Damien Hirst's sculpture of a shark in a tank, 'The Physical Impossibility of Death in the Mind of Someone Living', with a coelacanth displayed in a tank in the Natural History Museum. Although the animals are museum pieces, the conservator must understand the value, intention, material, and limitations of one object as art and another as science.

It is a feature of conservation that variety does not come just from the different artefacts we deal with, but comes also from the different and changing contexts for which we have to find appropriate conservation responses. As fast as artists, historians, scientists and others create new objects and new values for objects, conservators have to find new ways to understand and preserve the objects and those values.

Conservation is a future focussed activity. Conservators are concerned with the efficacy of a chosen treatment, the appropriateness of a preventive strategy, the reliability of a selected material, within a future perspective. Conservators intend that welcome consequences of their decisions will be immediate and long-lasting, and hope that unwelcome consequences will not appear until the distant future.

So what of the future for which we are training conservators? At a brainstorming meeting on the topic of future challenges for conservation it was stated 'Culture is about change and distinctively so in the twentieth century, but when the process of change becomes so fast that its material products are obsolete before they have even left the production line, isn't it rather perverse to collect them? Isn't the museum of the twentieth century a contradiction in terms? 1

The future for conservation will not  be driven by novel materials, or new analytical techniques, and it certainly will not be driven by the objects which left the production lines of the twentieth century, or the workshops of the sixteenth century, or the caves of the Neanderthals. The future of conservation is more likely to be driven by issues of access, ethics and information, factors which will shape how people view the value of the objects already in our museums, and those yet to be acquired.

Increased access is already a primary determinant of policy with regard to cultural heritage particularly, within Europe, in a developing framework of cultural identities. Satisfying demands to preserve cultural identity through access to symbolic artefacts raises ethical issues which are likely to generate additional demands for information and access to information systems. Cultural objects will not become defunct but rather, like the Parthenon Sculptures or collections of fossils, increased significance and interest in their meaning, may place them at risk in the future.

Finally, a caveat. One of the leading economists of the twentieth century, Charles Knight, questioned the extent to which economists could predict future economic patterns, to what extent the universe is made up of such things which have constant behaviour? He said, 'It is manifest that the ordinary objects of experience do not fit this description closely, certainly not such "things" as men and animals and probably not even rocks and planets in the strict sense.2 Just as long as the train continues to stop at Gloucester Road.