Censer: Making Sense of an Object

Figure 1. Stages in the manufacture of loop-in-loop chain. Photography by V&A Photographic Studio.

This censer, (Loan:MET ANON.1-1951) is a 15th-century censer found walled up in a house where it was probably hidden during the reformation in the 16th century. Originally, it would have had chains enabling it to be swung, however these were missing and the decision was made by the British Galleries team to replace them to enable the function of the censer to be more readily apparent. 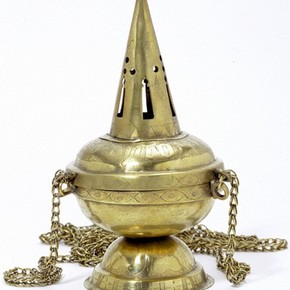 The medieval treatise On Divers Arts by Theophilus was consulted for further information on the censer’s manufacture. It states ‘draw thin or thicker wires of copper or silver and intertwine them, using an awl, in three braids, or in four, five or six, depending on the thickness you want for the size of each censer.’ This was not particularly helpful; however, examination of other censers in the V&A collection showed that some presented the ‘braids’ described in Theophilus, which are similar in appearance to French knitting. In addition, approximately half of the censers had loop-in-loop chains. This is one of the earliest and simplest known types of chain and was widely used in the ancient and medieval world. As thecenser itself is of a very simple design, after consultation with curators it was decided to make loop-in-loop chain.

Loop-in-loop chain has the advantage that each individual ring is soldered separately before it is linked to the next. Figure 1 shows several stages of construction. Soldering each loop separately removes the risk of accidental melting of previous solder joins while adding loops (and inadvertently ending up with a solid lump of metal instead of a flexible chain). Different sized chain samples were made, and one was chosen to be made up into the censer chain. After manufacture, one end of each of the 3 chains was attached to the censer using a jump ring, while the other end was attached to the lily from which the censer was swung. This also had to be made from brass sheet, with simple ‘wriggle work’ decoration similar to that on the censer itself.

Figure 2 illustrates the object after treatment. The lily and chains can easily be removed from the object and are all stamped with a V&A stamp to be readily identifiable in the future.