Conservation or restoration? Treatment of an 18th century clock 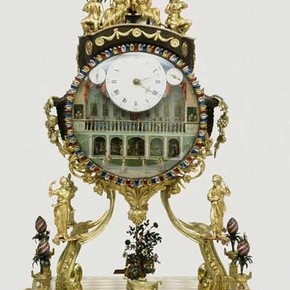 This clock, made by William Carpenter in the late 18th century (Figure 1), has four moving elements and was to be filmed in action for an 'Object in Focus' video.

An initial visual check revealed that the clock was dirty and dusty, with patchy and sometimes heavy corrosion products over most of the copper alloy and gilt copper elements, and some losses to the painted elements. The only part of the movement missing was one part of the fly vane. When power was cautiously applied to the lower part of the mechanism to see if the clock would function, it seemed to be capable of running.

The clock was dismantled for treatment and to enable further examination of the movement. The whole mechanism was coated with a fine black dust which had combined with the residues of degraded lubricating oils to form a sticky paste, and many parts were corroded. The springs seemed serviceable for the purpose of filming, although in commercial restoration the music spring would have been replaced because the coils had contracted and weakened to such an extent that it wouldn’t provide sufficient power.

The treatment carried out on the various external elements conformed to Museum practice. The surfaces were solvent-cleaned following tests of various solvents in unobtrusive areas. Then corrosion products were mechanically removed. The heavy corrosion around the pastes on the dial were treated with an ethylene diamine tetraacetic acid gel which helped to soften and partially dissolve the corrosion, enabling it to be mechanically removed. Areas of flaking paint were consolidated, and the metal surfaces were given a protective coating.

In standard commercial practice, dismantling would be followed by 'washing' all the working parts by placing them in an ultrasonic tank with a commercial non-ammoniated solvent mixture. In this instance, the components were swabbed with IMS to remove surface and old oil residues, and more intricate elements were dry brushed, and then brushed with IMS. Powdery corrosion products were removed using very fine wire wool on swabs, and working surfaces only were rigorously cleaned, to enable the mechanism to run freely. Here the treatment undertaken departed from commercial practice, where all corrosion products would be removed from all elements back to a metal surface. 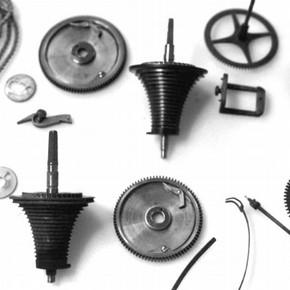 The missing vane of the fly or governor was made from brass, and was copied in appearance and construction from the remaining original. It was lightly riveted in place so as to avoid damaging the surrounding metal. This is in line with commercial practice, except that the replacement part would not be as visually evident because the original parts would be brightly polished. It is the intention that the replacement fly vane be stamped with 'VA' and the date of installation, so that it is evident that this is a replacement part.

In addition, a hammer was made for one of the gilt copper alloy figures, and attached using Paraloid B-72 adhesive. This adhesive is widely used in conservation as it does not crosslink; it would not be used commercially as it is not strong enough to withstand day-to-day running. The parts of the movement requiring lubrication were oiled with a commercially-used oil, and the movement was reassembled. Although the treatment of the movement was complete, the clock still needed considerable work in order to get it functioning.

When the springs were partially wound to provide power, it was seen that the going and striking mechanisms worked correctly, but the musical mechanism didn’t. It became apparent that the main spring was too weak to power it, and therefore additional power was applied by a key turned by hand. The gilt copper alloy figures were connected to the musical mechanism, and the bells which they play were moved around until the correct order was found, so that a recognisable tune could be played.

Before filming the clock was partially dismantled to show the movement, as the film director wanted to show the mechanism as part of the 'story' of the clock. The movement was operated and filmed. Then the clock was reassembled and repeatedly operated so that the director could film the automaton figures, the pendulum and the moving figures on the dial. In the description of examination and treatment of the clock, we have identified differences between a restorer’s approach to the object, whose aim is to restore the clock to reliable day-to-day running, and a conservator’s approach, where the object is stabilised and brought to a condition where it is visually understandable, in this case as a high status object, valued for its bright colours and shiny surfaces.

The treatments undertaken on the movement represent a compromise between the two approaches, where the absolute minimum amount of mechanical cleaning and replacement of parts were effected, to ensure that the clock would be able to function safely on one occasion. The process of preparing it for filming and then filming it also falls between these two approaches, and raises the issue of risk. The Carpenter clock, as a museum object, would not normally be subject to the risks of physical damage posed by the repeated assembling, disassembling and running of the object.

Justification for taking this risk lies in the nature of the clock itself. It was designed and built, not only to be decorative in appearance, but to amaze the onlooker by the various moving elements such as the gilded copper alloy figures, the moving figures on the dial, and to please the ears with the five tunes it could play. By filming the clock in action, we are able to provide the onlooker with a greater understanding of the object, of the maker’s intentions, and its effect on people who saw it.