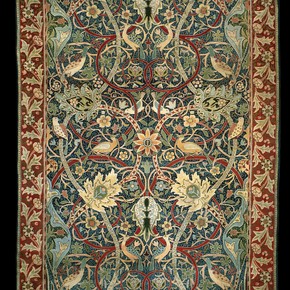 The Bullerswood carpet (measuring approximately 4 m wide by 7.5 m long) is one of the objects on display in the V&A’s British Galleries. The carpet was designed by William Morris (1834–1896) and woven by Morris & Co, Hammersmith, London, in about 1889. It has a cotton warp, jute weft, and woollen pile coloured with a range of natural dyes. The richly-coloured complex design consists of scrolling arabesques with stylised flowers and birds and a border with repeat motifs of leaves and flowers. It has only rarely been displayed and is still virtually unfaded. Due to the size of the carpet, it will be displayed vertically with only the lower half visible.

The dyes used in the carpet are all vegetable dyes. These range from reasonably light-fast to very fugitive. The impact of fading on the colours is an important factor in determining the acceptability of conditions chosen for its display. The brighter the illumination, the easier the object will be to see but the greater the rate of light-induced deterioration.

Experiments outlined in this paper use equipment specifically adapted to determine the light-fastness properties of the carpet. They allow an informed choice to be made for its display. Data generated using this technique can be used to determine responses to different gallery illumination conditions and can be extrapolated well beyond the measured exposures.

Traditionally, the light-fastness of artefacts would be determined from the behaviour of facsimiles made of the same material and subjected to intense exposure such as sunlight. However, this type of approach has several drawbacks: it is well known that the light-fastness depends not only on the substrate and dye product but is also critically dependent on the exact dying process, the concentrations and dying conditions. In addition, the light-fastness of dyes will change with their exposure history.

For the carpet, accurate predictions of the response of different areas to gallery illumination were desired, as was determination of the exposure after which the two halves of the carpet (i.e. the lower half on display and the upper half shielded from illumination) would become noticeably different. To fulfil these requirements, a technique was developed that allowed selected areas to be illuminated, at 50klx, for up to eight days (equivalent to approximately 50 years in a gallery at 50lx) and to measure changes in their reflectance spectra during exposure.

The idea of using discrete areas on artefacts directly to evaluate (relative) light fastness was first described by the Canadian Conservation Institute (CCI) using visual assessment. More recently, the technique has been refined to use the same light source to expose an area and, by collecting the reflected light, to determine the colour changes at the same time. However, the principal desire in these procedures has been to obtain relative light-fastness rankings in a very short time and the 29 processes cannot be used to model actual response to gallery illumination with any confidence (the illumination is too intense to be correlated back to gallery conditions and the light sources, at least in the more recent development, do not correspond to ones used in museums).

In this study, areas of four of the principal colours present (blue, green, red and burgundy) were investigated on the reverse of the carpet. The results were used to predict the response of the equivalent areas on the front. Three areas of each colour were chosen at different locations to ensure reproducibility of the results. The modelling of the response of the obverse of the carpet was checked by investigating two areas on the front for very short exposures (limited to 3000 klx.h).

A Hitachi dual beam spectrophotometer was used to measure reflectance spectra. The fading illuminant was a UV filtered tungsten halogen (i.e. continuous spectrum) lamp. The spectrometer is linked to an external integrating sphere, with a 10 mm sample port in contact with the area undergoing testing, by a special fibre-optic assembly. The fading lamp is housed in a Schott  microscope illumination system. One of the two tails was directed through the integrating sphere's viewing port onto the measurement area (achieving illumination levels up to 50 klx), while the other was directed onto a lux logger to monitor the lamp output. The experimental set-up eliminates uncertainties associated with relocation (as the integrating sphere is not moved between readings) and with fluctuating light output (as this is monitored) and avoids local heating during exposure. The procedure gives an estimated precision of 0.2% relative reflectance.

Reflectance spectra were used to calculate the best estimate for the CIE tristimulus co-ordinates. These, in turn, were converted to CIELAB colour space for further analysis. Colour changes are expressed using the CIE94 colour difference equation. Finally, the responses of areas on the obverse of the carpet are predicted by portioning measured responses from the reverse into contributions from the dyed woollen pile and exposed parts of the warp and weft. All uncertainties are derived directly from the precision of the reflectance spectra.

The initial results and a fuller description of the experimental techniques and procedure have been published elsewhere 1  and are summarised here.

Surprisingly, blue areas on the carpet were shown to fade the most with the least fading occurring for burgundy. Traditionally, red and yellow vegetable dyes are considered the most light sensitive, with blue dyes being amongst the most stable, so this result seems contrary to the rule. The blue dye was identified as indigo (probably woad) which is expected to be particularly light fast on wool! The differences were particularly marked for the early portions of the fading (up to 2000 klx.h) after which the rates for all the colours converged. The colour balance in the carpet (the colour difference between different colours) is considerably more stable than any individual colours (between ISO blue wool 6 and 7).

The V&A is developing a new lighting policy which establishes acceptable fading rates for artefacts and proposes that changes be limited to one 'just noticeable fade' (JNF) in 50 years. The size of a colour difference corresponding to just noticeable has not satisfactorily been determined but is assumed, in the policy, to be about equal to grey-scale 4 (corresponding to a CIE94 colour difference of 1.7), as used by Michalski for the data on which the policy is based. Experiments currently underway at the V&A suggest that it probably corresponds to a CIE94 colour change of perhaps 0.8, at least under ideal laboratory conditions and when comparing two simple colour swatches side by side.

Although there is a considerable variation in response between different people and for different colours, colour differences ³ 2 CIE94 units were invariably detected by all participants so far included in the experiments. It seems, therefore, faute de mieux, that a colour change corresponding to grey-scale 4 is not an unreasonable estimate for the onset of just noticeable differences, especially as most artefacts do not consist of blocks of simple, uniform colours, the illumination in galleries is less than ideal, and an unchanged 'original' is not usually available with which to make comparisons.

Accepting for the moment that changes would become noticeable once they reach grey-scale 4, the exposure for the carpet would need to be limited to 3.4 Mlx.hrs in 50 years (corresponding to 19 years of display at 50 lux) to conform to the policy. As it is planned to display the carpet at 100 lux, it should be taken off permanent display within 5 years, allowing a contingency for error and reserving up to a further five years display in the ensuing 45 years.

1 Pretzel, B.C., 'Determining the light-fastness of the Bullerswood carpet' in, Roy, A., and Smith, P., (editors), Tradition and Innovation: Advances in Conservation, Contributions to the IIC Melbourne Congress,2000, pp 150-154.