The British Galleries project from a paintings conservation perspective 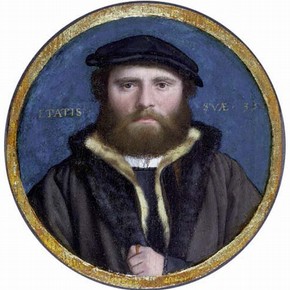 I was introduced to the British Galleries project within days of starting at the V&A in March 1996. The first task was to survey the condition of the 120 paintings and all the painted furniture then on display in the galleries of British Art & Design, as well as in the gallery stores, which all had to be emptied. Paintings not previously in the galleries, were also considered for display. The list was added to over the years as the designs took shape. In all, more than 500 paintings and painted objects were surveyed.

Over the ensuing five years 124 paintings were prepared for display in the new galleries, including 16 new loans most of which were conserved by the lending institution. There is a great variety in type and scale from a three metre square fragment of 17th century oil-on-plaster wall-painting by Laguerre, a painted and gilded plaster relief by Burne-Jones, 17th century wall cloths thinly painted in distemper to an oil-on- panel reattributed to Holbein (figure 1) measuring 126mm in diameter, besides many more conventional oil paintings.

Close examination and analysis has led to discoveries that, allied to art historical research, tell us a great deal more about the objects. Some have been reattributed, others re-dated with the result that they could no longer be included. The treatments varied from straightforward surface cleaning and preventive conservation framing to the removal of discoloured varnish and overpaint, mending split panels, torn canvas and consolidating flaking paint.

It is always satisfying to see a painting’s colours emerge from beneath obscuring layers of extremely discoloured varnish or thick dirt. Lely’s portrait of the 2nd Earl of Rochester (491-1882), Peg Woffington by Van Loo (601-1882), the 17th century full-length portrait formerly thought to be the Countess of Derby (565- 1882) and the 18th century oil-on-paper roundel from the Northumberland House drawing-room (W.3-1955) are a few of those that showed a dramatic difference (see page 19). There were also some interesting problems concerning display; for example, the 17th century panel entitled ‘Man Grasping the Hind Legs of a Stag’ (W.19-1945) 1  . The panel consisted of two parts: an image panel with vertical grain and a text panel with horizontal grain.

After repairing the splits that had been caused by conflicting grain alignment, a method was sought to enable the panels to be displayed in their original configuration without rejoining them. A shelf for the upper panel to sit on was devised and was made by Katharine Donaldson, Frames Conservator. She also converted the existing frame into a microclimate. There were many instances where advice and assistance was sought from other Sections notably Paper, Textiles and Furniture. A few objects were treated jointly; the oil-on-paper roundel mentioned above was given structural treatment by Victoria Button in Paper Conservation, while a very discoloured varnish and ingrained dirt layer were removed in the Paintings studio.

Among the interesting discoveries were duty stamps on the reverse of two painted cloths (Loan: Eggar.3 & 4) previously thought to be 17th century in date. Research 2  revealed that it was a stamp for 'growing duty', a tax on luxury goods that was introduced in 1701-2, and that this particular stamp dated from 1712. The cloths, painted in distemper with hunting scenes, are two sections from a scheme that would have decorated a whole room. (figure 2) The background shows a distinctive stylised landscape. Unfortunately, the redating meant they were no longer suitable for the Tudor & Stuart display. 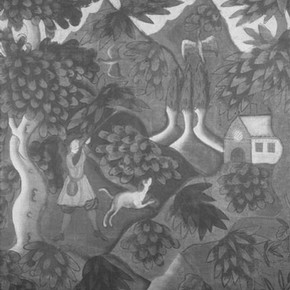 Infrared examination revealed a great many pentimenti of varying degrees of significance on numerous paintings. A nice example was the discovery of grid lines and detailed under-drawing on the panel of Orpheus and the Beasts (W.156-1923), chosen to show how images were spread through prints. This was a perfect demonstration of the method used to accurately transfer the printed image to the panel and it became the basis for an interactive display. In the case of the portrait of Dudley, 3rd Baron North, the infrared images showed that a later restorer had painted out the Baron’s elaborate garters.

I would like to mention the personnel who have taken part. The initial assessments and survey were organised by the former Head of Paintings Conservation, Susannah Edmunds. These estimates made it possible to employ Fran Griffin for almost the whole duration of the project. Fran personally prepared 34 of the paintings as well as making an invaluable contribution to the work of the Section in general. Katharine Donaldson was responsible for the frames of all the paintings as well as gilded frames of prints, watercolours, pastels and textiles. She has undertaken a great range of work including cleaning, structural repairs, re-carving lost ornament, replacement of composition and plaster mouldings and advising on panel treatments.

As the British Galleries are installed it is possible to see how the different types of object complement one another. The paintings have much greater impact juxtaposed with the artefacts, textiles and costumes they depict as well as bringing figures to life in the many stories told throughout the Galleries. How much easier it is to imagine an 18th century teapot in use when you can see The Gough Family 3  taking tea with an almost identical pot; or to relate to the person who wore this colourfully embroidered 17th century jacket when she is there before you wearing it. 4  The scope of the project and the period it covers from 1500 - 1900 have provided a wonderful opportunity to appreciate the range and scale of the V&A's paintings collection.

1. For a full account of the treatment see Annabelle Mills article in Vol.35 of this Journal.

3. The Gough Family by Verelst (Loan:Calthorpe. I)