This article is dedicated to the memory of Julie Breckman.

Several overlapping areas of interest are brought together in the investigation and conservation of this particular object – the history of multi-image prints, the Museum’s interest in prints in their original frames, and the unusual example of a hand crafted object that is also a patented invention. 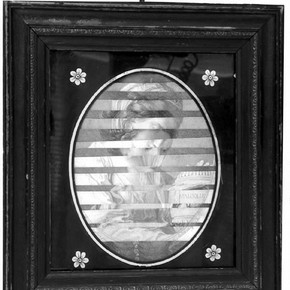 The V&A’s 1987 exhibition The Image Multiplied 1 curated by Susan Lambert, exhibited a number of prints in their original frames. This marked the beginning of a serious interest in this subject on the part of the Prints and Drawings Department, which fitted in very well with the Museum’s wider concern with historic interiors and furnishings. Examples of prints in their original frames have been added to theV&A’s print collection since 1987 on the rare occasions when really significant examples have been available.

Pauline Webber, Head of Paper Conservation at the V&A, saw an interesting and attractive example of this type of print in what appeared to be its original frame in the window of a print shop in Oxford. She examined it and passed the information to the Prints and Drawings Department at the Museum. After further examination the framed print was purchased from the Julie and Robert Breckman Print fund.

A particularly unusual aspect of this newly acquired framed print (E.382- 2002) lies in the fact that it is an example of a ‘Trick’ picture or ‘Novelty’ print popular in the late 18th century. It is described by its inventor James Hitchcock, on a printed label stuck to the back of the frame, as a Metamorphosis or Transfigurative print. It was designed to exhibit several prints or drawings within one frame.

“A certain Apparatus, by means of which several prints or drawings may be contained and exhibited in the same frame, and changed or varied at pleasure, and whereby each print or drawing will produce the same effect, as if contained in separate frames”. 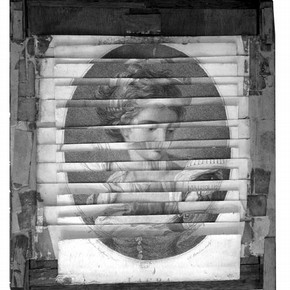 In essence, one of the images sits on a board that is free to slide, the other on a larger frame which is fixed. As the sliding board is moved up and down within the fixed frame, the picture changes or metamorphoses into a second image. Two, or even three or more images, can be contained within a single frame. This particular example shows two prints, both stipple engravings based on half length female figures by Angelica Kauffmann (1741–1807). One is by the printmaker P. Bettelini (1763–1829), printed in brown/black ink, and titled Laura. The other is by G. Scorodoomoff (1755–1792), printed in red/sanguine, and titled Mausolua.

Hitchcock’s invention was granted a Royal Patent sanctioned by His Majesty’s Royal Letters Patent, Bearing date February 27th 1793 2 . The Royal Patent consists of a detailed specification for making Hitchcock’s Metamorphosis or Transfigurative prints. It is a complex process that involves the following principles. A sheet of clean paper measuring twice the length of the eventual print is cut into equal strips. Each strip, pasted on its bottom edge only, is fixed to the sliding board so that they each overlap by exactly half their width. The illustration is then printed onto the surface of the paper strips from an engraved plate, passing the board, paper and plate through the printing press. A second set of paper strips is then slotted in between the first strips but this time pasted to the fixed sides, not to the sliding board. The board is moved downwards to expose the white paper of the second strips, which are then printed with a second image in the same manner as the first one. When the sliding board is moved up or down, it displays each print quite distinctly and separately. The process can be repeated several times to give a series of sliding boards each displaying a different print. Finally, the whole assembly can be hung on the wall by means of a threaded key or hook, the frame being moved up and down to display the full ‘transfigurative’ effect.

Stuck to the back of the frame there are directions on where and how to hang the framed prints taking into consideration “the way the light falls onto the object not to form shadows from the small projection in each division of the print”.When using candle light the advice is to hold it in a direct line with the print or the light will form “an ugly shadow”. This will prevent the frame becoming soiled with the smoke of the candle. There are also detailed instructions on how to change the subject by giving the frame, once fixed on the wall,“a slight pull downwards or a shove up again to change the print back again”. 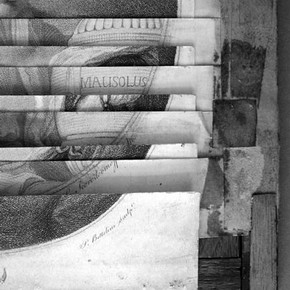 Careful inspection of the actual object reveals the following. The carved frame is made out of softwood, probably deal, and measures 275 mm by 246 mm.The glass is decorated by a method called verre eglomisé, a technique of decorating glass with engraved gold leaf. It has a dark blue background with a simple gold leaf in each corner and an oval opening of clear glass in the middle, outlined in gold, through which the two prints contained in the frame can be seen. The frame appears to have been previously opened, as the brown paper gummed tape holding the back board to the frame surround is relatively new. The frame surround was carefully detached from the back board and sliding assembly by removing the brown paper. Beneath the brown paper a layer of blue paper was revealed. Blue paper was commonly used in the late 18th century, usually a rag paper with indigo or smalt pigment, and this is assumed to be original. Removal of the threaded key freed the backboard from the frame surround and exposed the sliding mechanism on the which the prints are placed. The back board and sliding boards are made of mahogany, presumably chosen because of its dimensional stability and fine grain.

The construction of the images differs from the description in the Patent. The prints, on wove cream paper of approximately 20 micron, have been cut into strips.With a magnifying glass, it is possible to see a pencil line remaining along the cut edge. The cut strips of print have then been extended to the desired width with a thinner laid paper glued to the back of each strip. The combined width then corresponds to the paper slips described in the Patent. The strips of the first print are stuck directly  to the wooden sliding board, and those of the second print are secured to the fixed frame by brown paper and animal glue. Some of the paper strips had become detached from the sides of the fixed frame, and have been previously repaired with pressure  sensitive tape which has oxidised and is easily removed. On closer examination of the brown paper, it is possible to see that the top strip was placed first and held down by brown paper before adjusting the second one and so on. On each end of the fixed sides there are slithers of wood or thin spacers to adjust or take up the thickness created by the brown paper. It is not clear if these are original and more investigation is needed before repairing the boards and re-attaching the strips of paper.

It is rare to have a hand crafted object that has been the subject of a patented invention. One of the issues for the conservator is in reconciling the object, as found, with the patent description, and what this means. The object clearly differs from that described in the patent. If the patent represents the perfect form, then the object we have is an imperfect version.What could this tell us about the history of the object and how to approach its conservation? Perhaps our version of Hitchcock’s invention is a mock-up or prototype, or perhaps made by someone else following his instructions?

This interesting object also needs to be considered in the context of the history of multi-image prints. Hitchcock clearly had competition, hence presumably the need to patent his invention. There were other contemporary attempts to produce multiple images within a single frame, such as ‘concertina’ prints and so forth. The recent Rewind exhibition at the V&A included a modern Triwonder poster showing three changing images. This process has therefore been brought right up to date with the very same principle being applied in modern advertising posters.

With special thanks to Pauline Webber, Head of Paper Conservation and Liz Miller, Curator of Prints,Word and Image Department