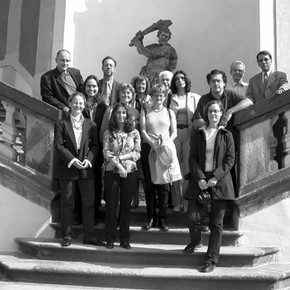 Appropriate lighting forms an essential part of any museum, gallery or other heritage site display, showing art objects, historic interiors, etc. to their best advantage to visitors. However, it is well documented that light is also a threat to many works of art, by the nature of their materials. Interior lighting levels can be characterised by a number of commercially available instruments (lux meters and radiometers). Due to the monetary cost of the equipment and its upkeep, and the additional cost in man-hours implied by any effective monitoring regime, this equipment is not always appropriate for routine applications in many museums and heritage sites.

An obvious attempt to avoid complicated measurements is to use a sacrificial simulation material on which the effect of light can be studied. This type of monitoring does already exist, with the use of Blue Wool Standards. In this system, strands of wool dyed with a fugitive (i.e. very sensitive to light fading) blue dye are placed in proximity to objects at risk from light damage. Any fading of the dyed strand is measured against a standard, and this can indicate that light damage is occurring to the objects. It was felt that a more sensitive, and standardised system was needed.

The LiDo project was conceived in response to this perceived need. It is a part E.U. funded collaborative project to develop and market a light dosimeter for use in museums and similar establishments. Such a dosimeter would be:

It will be similar to the current Blue Wool Standards (ISO 105–B01) but more sensitive to light than the present Blue Wool Standard One. The product will give an early warning to the potential of light induced damage, and so is likely to be useful for monitoring light sensitive materials such as textiles, watercolours and photographic prints. The project involves two areas of research:

The LiDo project started on 1 February 2001 and has a planned duration of 3 years with a budget of €1.3 million. Funding comes from multiple sources with approximately 50% coming from the European Commission under the Fifth Framework Programme, contributing to the implementation of the Key Action, 'The city of tomorrow and cultural heritage' within the programme Energy, Environment and Sustainable Development. The project has a contract number EVK4-CT-2000-00016. Remaining funding comes from national or local participant sources. One Patent Application (France FR2784458 or equivalent EP1121575) has been made for the concept.

Essential to any project is a good ‘mix’ of professionals picked to suit the goals. The project team consists of seven partners from five countries.

Two prototype forms of the dosimeter have been produced so far. A high sensitivity system that is something like 10 times more sensitive than Blue Wool Standard One has been produced and tested in the field. This is known as LiDo Sensitivity One and has proved successful in use. A second system (LiDo Sensitivity Four) is approximately twice as sensitive as Blue Wool Standard One and requires further development before use.

Before the general release of the dosimeters, consistency of response to a number of factors has to be fully tested. These include wavelength of radiation, sensitivity to pollutants, ease of handling, temperature and humidity dependence. Laboratory tests are focussing on artificial ageing under various conditions, both close to natural radiation levels, and also under accelerated conditions. The quantification of the fading process observed on dosimeters in connection with the light dose has to be provided for a large number of test series. Parallel to the laboratory tests, the dosimeters are being assessed in the field, at the Uffizi Gallery in Florence, the Victoria & Albert Museum in London, the Musée Cognacq-Jay in Paris and several historic houses in Prague. Since the fading of dosimeters has to be connected with damage observed on originals, each museum has selected a light sensitive object, for which any colour change is being surveyed throughout the project time. Market surveys and financial considerations also proceed in parallel. Presently, the target is to produce the LiDo dosimeters at the same price as or better than the Blue Wool Standards (the Blue Wool Standards are £36 each as at October 2002). The scale up to commercial size is progressing well and is on target for commercial release of the two forms of dosimeter in 2004.

The project is approximately half way through and has successfully undergone its midterm assessment by the EU . The remaining eighteen months will be spent on further refinements of the LiDo Sensitivity Four dosimeter, finalising the Sensitivity One dosimeter formulation, ensuring the field test results compare favourably with the laboratory condition results and development of the production and marketing of the dosimeters. At the end of the project a public workshop will be organised to discuss the results with a broad audience, consisting not only of museum curators and conservators but also of specialists in light induced effects, coming from the technical side. The workshop is planned to take place in Florence, Italy 27/28 November 2003.

If you wish to register an interest or want to discuss any of the topics raised in this short article then please do e-mail either of the authors direct. Alternatively, a LiDo web-site is updated regularly and may be found at http://www.lido.fhg.de/. A site containing interactive news is available at http://db.re.fh-koeln.de/conservation/lido/lidonews.aspx. Information of the EU contracts and associated documentation is available on the CORDIS website at http://www.cordis.lu/en/home.html