Designed by Oliver P. Bernard, in 1930, few Art Deco buildings were more glamorous than the luxury hotel. In England, Claridges, the Savoy and the brand new Dorchester all had sumptuous Art Deco interiors. But Oliver P Bernard’s designs for the Strand Palace made this one of the most celebrated hotel interiors in London.

Bernard had worked as a set-designer in theatre and opera, in Britain and the USA. This experience clearly influenced his work at the Strand Palace. The foyer combined traditional and new materials and made innovative use of glass and lighting. The walls were clad with pale pink marble and the floor with limestone. The balustrades, columns and door surrounds were made of translucent moulded glass, chromed steel and mirror glass. Bernard designed interiors for other London hotels and cafés, including the Lyons Corner Houses. The foyer was removed from the Strand Palace Hotel in 1969 and, for the first time, was partially reconstructed for the recent Art Deco exhibition.

When the Strand Palace Hotel entrance/foyer was dismantled it was rescued by the V&A and sent to Battersea Store, where it remained for many years largely forgotten and ignored.

The decision for an exhibition and celebration of Art Deco prompted the idea that the Strand Palace Hotel entrance would be one of the major features of the exhibit. At the store in Battersea Keith Marks and others laid out the dismantled pieces in situ, like a flat jigsaw puzzle but nobody had any idea what it consisted of, or if any parts were missing.

In a terrible state of disrepair and very badly damaged, it looked like it had been taken to the stores and just ‘dumped’. There had been no provision made to store it correctly, as befits a beautiful and important work of art.

Lorries delivered the hundreds of pieces to the workshops at the V&A. The pieces ranged in size from the smallest at one metre high, right up to the spindle for the revolving door which was two metres high and weighed 108 kg. It took eight people to carry the spindle to the first floor workshop. It took about two weeks for all the pieces to be delivered and unloaded, storing them wherever room could be found. It was then down to me to start the process of putting the jigsaw together. The first job was to clean the pieces. I started to clean the items but as time went on Keith and John Dowling helped me, joined by Albert Neher and the woodwork conservation team. 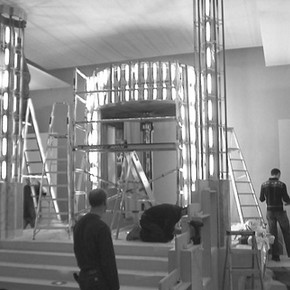 The centrepiece of this exhibit are the revolving doors. The encasements for the revolving doors, which consist of two huge circular panels, had been badly stored. Instead of being circular they were completely flat. To restore them to their former glory we had to erect them in the workshop. A wooden circle the size of the revolving door was bolted to the floor. As the flat panels were erected around the wooden template, the metal pieces were clamped together, squeezed into the circular shape and bolted to the template. Although the majority of the pieces for the foyer were there, I had to make some items that were either broken or missing. The items that had been erected in the workshop were then dismantled and all the pieces had to be taken, either by hand or on a trolley, to the exhibition area.

Once everything was at the exhibition site, we had the job of putting all the pieces together. Albert Neher was in overall charge of the project. We had photos for reference and we had decided in the workshop, where and how various pieces went together. No-one however had seen it in its original setting in the Strand Palace Hotel. It was like compiling a huge three dimensional jigsaw which required a concerted, team effort. For some pieces, like the revolving door, it was obvious where they went, but there were a number of passionate debates as to the order of installing the various pieces. We found out that there was only one way to erect it, and if the pieces were not put in the correct order, it meant that at a later stage the glass and mirrors would not fit. 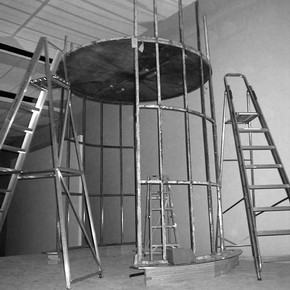 Figure 2. The restoration of the revloving doors (click image for larger version)

The delicate nature of the glass in the outer sections and the mirrors in the inner section proved to be very time consuming and nerve wracking to put in place. Above the revolving doors, the mirrors are like wedges of cheese. Keith slid the wedges into place, Albert then inserted a screw and I tightened the single nut to hold them in place.

It took about four weeks to erect. As the work was progressing it became a focal point for the whole museum. Staff from all departments paid a visit to see how it was progressing. A photographic record was kept of the work, and everyone working on it started to get very excited about the whole project.

From start to finish it was a team effort, everyone that worked on the project felt immensely proud when it was completed.