A souvenir from Guangzhou

A selection of approximately 200 Chinese export 1 paintings from the V&A's collection were exhibited at the Guangzhou [formerly Canton] Museum of Art in China from 28 September 2003-4 January 2004.

Very few export paintings of this type remain in the collections in Guangzhou; consequently they are regarded with great interest by Chinese scholars as an invaluable documentation of the history, activities and socio-cultural exchanges that took place around the Pearl River Delta during the eighteenth and nineteenth centuries. The paintings were produced in the port cities of China and became popular souvenirs sold to western travellers and merchants. They represent the images of Chinese culture taken back to the West in an age that pre-dated photography. Appropriately, the exhibition was entitled 'Souvenirs from Canton'.

During the eighteenth century no visit to Canton was complete without purchasing some artwork from one of the new painting studios in New China Street. Watercolours had an added attraction because they were of a convenient size, were relatively inexpensive, and could be bound into albums and books for ease of storage and display. The artists worked in both transparent and opaque colour on a surface of European or Chinese paper, as well as silk, ivory and pith 2 .

The paintings exhibited in Guangzhou date from the second half of the eighteenth century, the V&A possessing very few from the first half of the century. The subjects include boats, trades, birds, flowers, insects, musical instruments, merchants, tea and silk production, and porcelain manufacture.

Out of the 'One Hundred Occupations' series, an important part of the collection, 53 were selected, illustrating the trades and occupations of Canton. They were acquired in 1898, not for their artistic content, but as pictorial documentation of the 'industrial arts' 3 . The variety of street activities and traders that could be seen at the time are illustrated- including cobblers, wok-menders, dumpling-sellers, glass grinders, porcelain repairers and street theatre performers.

Out of the V&A's collection of 50 boat paintings, 30 were selected for exhibition. They illustrate the great variety of mainly riverboats in use in the late eighteenth and nineteenth centuries. Transport by river and sea was the most important means of connecting Ghangdong Province with other coastal cities of China. There were many shipyards in port cities such as Guangzhou and so boats were a popular subject matter. They were named according to their shape, function, place of origin or the cargo they carried. The Duck Boat (figure 1) was used to transport ducks whilst the Flower Boats, a euphemism for floating brothels, were elegantly decorated boats moored permanently, with Pimp Boats that ferried the clients to and fro.

The paintings of the 'One Hundred Occupations' were executed on thin, good quality Chinese xuan paper, made from the fibre of the 'than' tree. It was first sized with alum and animal glue and after drying, brushed with a lead white (lead sulphide) ground. The images of the traders were traced from other copies or copybooks, possibly with a metal stylus. The outlines were filled in with colour and details added later. 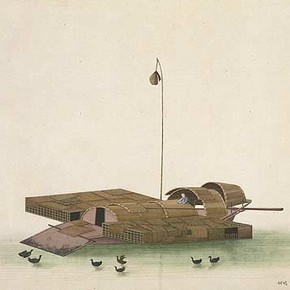 When the paintings were removed from their poor quality mounts, Chinese inscriptions at the bottom of each sheet were discovered. Large areas of the paper that had been masked by the mounts revealed that the white lead carbonate ground had become blackened. A decision was made to treat some of the most disfigured areas. The Gortex™ and hydrogen peroxide method was used to alter the black lead white back to white 4 . The most damaged of these paintings were lined with a thin kozo Japanese mulberry paper, while others where flattened to remove creases and indentations caused from previous mounting methods.

The boat pictures were painted in gouache-type colours (pigment bound with animal glue and some colours mixed with lead white) onto a very thin Chinese bamboo paper. Due to the fragile nature of the paper and losses and tears to the edges of the sheets caused by inappropriate mounting methods some 50 or 60 years ago, it was decided to line each painting. The colours used in the paintings were extremely sensitive to water and so, to minimise risk to the work, a treatment programme was devised to control the amount of water used in the various processes. The procedure involved flattening, removing discolouration, lining, drying and pressing between felts and boards. The lining was later trimmed down to approximately 5 centimetres and the paintings hinged into new mounts.

Sixty paintings depicting birds, insects and plants were exhibited. Botanical subjects represent an important category in Chinese export painting. The V&A collection of flora painting spans the period between 1770 and 1840, and the exhibition presented the opportunity for some of them to be studied by the South China Institute of Botany, Chinese Academy of Sciences. The flora paintings were produced primarily for technical study in a standard format, to include the subject with branch, leaves and blossoms. These paintings, categorised as belonging to the 'yuanti' (Academy) style 5 , were produced by traditionally-trained artists. Whilst it is thought some guidance may have been received from the European customers in rendering the subjects as true to life as possible, they still contain elements that are inherently native, thus embracing aspects of both western and Chinese traditional painting. They combine native vegetable colours such as indigo and madder red, and mineral colours, including azurite blue, malachite green, cinnabar red, and lead white. Although many botanical paintings in the collection are on Chinese paper, there are a number on watermarked paper made in England by J. Whatman and dated 1812 and 1821. 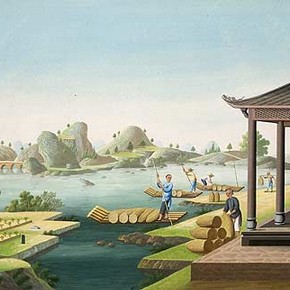 The porcelain manufacture paintings are executed with gouache-type colours on to a xuan paper prepared with a ground of lead white, alum and animal glue. Some areas are glazed, possibly with vegetable gums, to add depth and richness to the paintings. Several steps of the manufacturing process are often depicted on one sheet. Each painting has been pasted onto a secondary support of coarse, open-weave canvas. The sides of the painting and the protruding canvas were bound with strips of marbled paper (Extra & Spanish Drag pattern 1850-1890), often extending over the edge of the painting. There is clear evidence from the pattern of dirt and damage that these paintings were removed from strainers and may previously have been displayed as framed pictures. Underneath the marbled paper was a painted blue border 1.5 centimetres wide on the canvas framing the painting. This is more in keeping with other contemporary export paintings, such as pith paintings, which generally have borders of blue silk, or paintings of similar subject matter and technique incorporated into wallpaper schemes like those at Saltram House in Devon. I have also seen a set pasted similarly onto canvas and fixed onto wooden strainers with paper mache frames. It could be that they were prepared this way in Canton, since after 1780 many of the water-colourists also painted in oils, and so straining up canvas on a stretcher would have been a familiar technique. Most of these paintings were in fair condition, but in the past had been displayed unglazed. They were dulled by ingrained and surface dirt which, after removal with chemical sponge and soft grated erasers, revealed blue skies, pink sunsets and green leafy landscapes.

The paintings of silk, tea and porcelain manufacture are interesting in that they are accurate in their depiction of technical detail, but are set in fanciful and idyllic surroundings far removed from the realities of where they would have been produced. Porcelain, for example, was manufactured in a town five hundred miles north of Canton. Perhaps the artists wished to present an idealised setting in order to appeal to the European imagination.

The majority of the paintings underwent some conservation treatment and all were remounted. In the museum's large exhibition space, they were displayed in cases without frames using simple Perspex clips to hold them in place. The curators and technical staff were all extremely helpful and generous. Indeed, on the first day of installation it seemed as if the whole museum staff was inside the long wall-cases, measuring and fixing. The display system, however, was uncomplicated and the exhibition was installed smoothly.

Before the opening, we were treated to a day's excursion with colleagues from the Guangzhou Museum of Art, Macau University and the Chinese University in Hong Kong. We boarded a boat and travelled the old trade route along the Pearl River! The opening of the exhibition was celebrated in grand style with ribbon cutting, firecrackers, streamers, speeches and gifts, followed by a series of lectures and a lavish banquet of many courses.