An away day to Belgium: Washing tapestries

On a bright sunny day in June the Textile Conservation Section set off on an away-day to Belgium to witness the washing of a tapestry. The process was being carried out in a specially designed facility using an innovative system that we hope to employ on objects for the new Medieval & Renaissance Galleries. 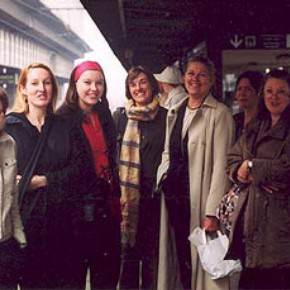 One of the objects chosen for the galleries is a tapestry from the 'The War of Troy' series woven in Tournai 1475-90, in wool and silk and measuring 4.13 x 6.80 metres. Over the years it has suffered a noticeable amount of damage and been poorly repaired. Indeed it has been cut into seven pieces and rejoined. Its condition could be categorised as fair to poor and before it can be hung for display it is in need of full conservation treatment. The first phase of treatment will be dedicated to cleaning, including washing. The fragile condition of the tapestry and the relatively recent developments in wet cleaning, led us to re-evaluate past methods.

In the past, tapestries were most commonly washed in temporary baths made up in a large enough space for them to lie out flat. The baths were constructed from polythene sheeting with plastic drain pipes for the sides. Large quantities of softened and de-ionised water were required on tap, as was adequate drainage. This system allowed for the complete immersion of the tapestry during the washing and rinsing processes. To facilitate efficient soil removal, mechanical action in the form of sponging was essential. In order for the whole surface of the tapestry to receive the same treatment, the tapestry would be rolled on a roller in the bath as the sponging progressed across its entire surface. To lessen the amount of rolling, some studios invested in specially designed gantries from which sponging could be carried out. However, it was still necessary to roll the tapestry to clean the bath between washes and rinses. Though this method of washing is highly efficient at soil removal, there are drawbacks.

Using this method the tapestry undergoes considerable physical stress as it is repeatedly rolled and re-rolled in its vulnerable wet state. The sponging inevitably dislodges damaged weft yarns and areas of weak silk frequently suffer loss. It is a lengthy process taking on average from 10 to 12 hours. At the end of the wash the tapestry is blotted and laid out to dry. Drying can take anywhere between 12 and 24 hours, any fugitive dyes in the tapestry or repairs (it is usual for tapestries to have undergone generations of repair over the centuries) have plenty of time to migrate into neighbouring yarns. As the soiling is released into the bath there is a possibility of re-deposition. The complete immersion of the tapestry for lengthy periods, though very effective at soil removal, results in the swelling and realignment of the fibres which can cause dimensional change. 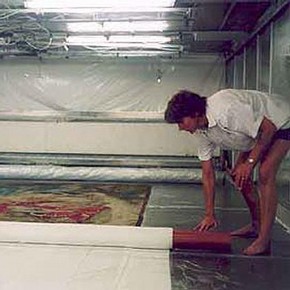 Figure 2. Paper towelling being unrolled over a tapestry during the drying process

The alternative system that we visited in Belgium is housed in, and operated by, the De Wit Royal Manufacturers in Mechelen. Set up in 1889 to manufacture and restore tapestries, their washing experience therefore stretches back for more than a century. About 13 years ago they developed an innovative new system which uses a combination of aerosol spray and vacuum suction. It is fitted with integral sensors to control pH, temperature, water flow and pressure.

The facility consists of an enclosed chamber with glass panels. The base is a large suction table 5 x 9 metres. Ranged across the ceiling are 45 aerosol sprays approximately 1.75 metres above the platform. During the cleaning process the tapestry is held in place by continuous suction. When the aerosol is turned on the whole chamber fills with almost weightless micro-bubbles of water vapour which are drawn down evenly through the entire tapestry. A low concentration of a non-ionic detergent is introduced to the aerosol system for as long as is deemed necessary for soil removal. This is replaced by softened and then de-ionised water during the rinsing process. In cases of extreme soiling sponging can be carried out from a gantry. The tapestry is still held under suction whilst being sponged, therefore there is no possibility of movement which would result in damage to weak areas of silk.

The aerosol/suction combination creates a very even and intense cleaning system with the advantage of the entire tapestry being treated simultaneously. The continuous flow through the tapestry means dirt is loosened from the fibres efficiently and then immediately drawn away avoiding the danger of re-deposition. There is no movement of the tapestry, therefore no mechanical damage from manoeuvring a wet textile can occur. The tapestry is never completely immersed in water thus avoiding dimensional change or shrinkage.

The pH, conductivity and temperature readings are displayed on a television monitor. The client is presented with the graph of the readings, a very useful piece of documentation, and a DVD of the entire procedure which has been filmed via a roving digital camera attached to a bridge. During washing, any part of the tapestry can be examined in close up through this camera.

During drying there is continuous suction. Towelling is unrolled over the tapestry's entire surface, covered with polythene and left for a few minutes. The process is repeated. Finally the towelling is replaced by absorbent paper. After blotting the tapestry is left uncovered with the vacuum on. The air being circulated through it is pulled in from outside, filtered and heated to 30°C before use. After use it is extracted back outside.

The whole process takes approximately eight hours including the drying. The speed of the process and continuous suction avoids the danger of fugitive dyes migrating. For the historically important Troy tapestry which is pieced and heavily repaired with numerous painted patches, this system would appear to offer a very safe, controllable and, most importantly, effective method of wet cleaning.

The National Trust have been using De Wit to clean a number of tapestries each year since 1996. Notably, the Hardwick Hall tapestries with a particular type of black, sticky soiling that is extremely difficult to remove. They have been very satisfied with the results and encouraged us to "go and see for ourselves". Armed with away-day tickets from London to Mechelen - we did.