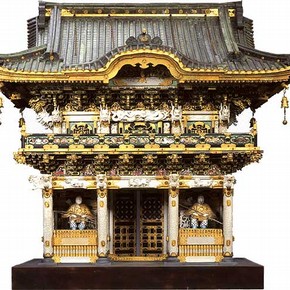 There were a great many models conserved for the Architecture for All Gallery, but none is more intricate than that of the Shrine and Mausoleum Gate of Yomeimon of Toshogu, built for the founder of the Tokugawa Shogunate (1603-1868) (W5-1918) (figure 1). The splendour of Japan's greatest architecture was replicated in scale and detail, testifying to the skills of the nineteenth-century craftsman. The model was displayed at the Japan British Exhibition 1910 at the Great White City, Shepherd's Bush, London. 1

The substantial model (85 x 65 x 45cm) is constructed of a series of platforms, each supporting the next, terminating with the roof load. The galleried first floor, borne upon columns, exemplifies the fine quality of the urushi lacquer employed in the model. The intricately carved tableaux set within the gallery rails, depict scenes from Japanese mythology and are decorated with water based pigments. Copper deposits found at Ashio, south-west of Nikko, used on the celebrated mausoleum are reproduced on the model's copper roof tiles. 2

The general structure, although retaining some stability, had suffered approximately two hundred losses. A great many detached and fractured architectural components were fortunately preserved in the V&A's stores. Detached screens, doors, fencing and brackets, all elements undertaken by various craftsmen, were generally complete. The losses to the antlers, lions, dragons and intricate miniature joinery were more intrusive. Finger imprints found on the first floor had clearly etched into the translucent lacquer surface, sustaining unacceptable surface damage. 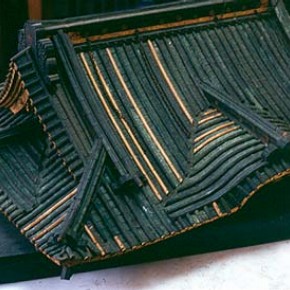 The loss of roof tiles affected the overall appearance of the model where vertical timber beams are overlaid with copper sheet to simulate tiles (figure 2). Powdery discoloration on the ridges and flat tiles was caused by bird excrement. Minor corrosion was evident on the metal mounts located on beams and brackets, affecting blemishes on the surface.

The ground floor polychrome ceiling was in perfect order, having sustained no deterioration from dust and movement. The carved interior panels, due to dislocation, had surface abrasions. The loss of the temple guards aesthetically affected the visual statement of the temple, a dominant force presiding over the whole.

The structural treatment needed to stabilise the object required the total dismantling of the architectural structure. Brass rods rise uppermost through the plinth to screw into the roof beams allowing stability for the separation of the construction levels. By gaining access to the interior, it enabled a thorough survey of the construction methodology to be recorded. On close inspection areas of architectural losses were revealed, enabling an identification process to be undertaken and a systematic component replacement schedule to proceed. 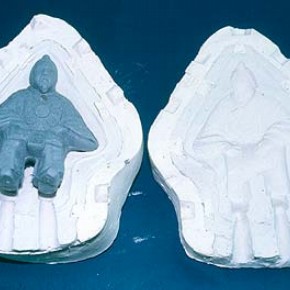 To remove the finger imprints, a fine cotton t-shirt cloth was dampened with Stoddard solvent (white spirit) via a pipette, the lacquer surface was lightly wiped in 5cm areas. The heavy imprints were treated with de-ionised water using the same method.

The metal mounts were cleaned with Shellsol A (aromatic hydrocarbon) and reapplied to the joinery where necessary using Paraloid B-72 in acetone. All loose and unstable roof tiles were re-attached with Canadian fish glue. Original roof and ridge tiles and gilded ridge elements were re-located and glued in place. The tiles were surface cleaned with Shellsol A applied on swabs, taking care not to affect the patination.

The loss of approximately 40 tiles distracted from the overall appearance. Replacements were created from a copper sheet milled down to 25mm thickness, cut into the required lengths and formed around dowelling. Tests were carried out on copper sheet to replicate the tile patination. A solution of 5g copper sulphate, 20g sodium chloride, 2g potassium sulphide in 20ml de-ionised water was applied by brush prior to gluing the replacement tiles in place.

The missing temple guards were reproduced by Justin McMorrow, Senior Conservator, National Maritime Museum. One figure was modelled in plasticine, working from monochrome photographs of the original figures on the model of the gateway. As insufficient visual data existed to carry out an exact replica, it was decided after discussions with the gallery's curators  that an impressionistic approach should be adopted with the aim of replicating the dimensions, posture and colour of the original to blend within the model. The plasticine model was cast in Sicovoss BL (silicone rubber), using a plaster casing to support a thin silicone layer. Two figures were cast in polyester resin with fillers of <40% synthetic amorphous silica, flake white dry powder pigment and barium sulphate. The catalysed mixture was placed on the open mould. After the gel coat had cured a fine layer of glass fibre and polyester resin was laid into each half of the mould. A catalysed mixture of gel coat was applied to the joining edge and both halves of the mould were quickly assembled and held together (figure 3). The beard was removed from one figure to comply with the original, the details drawn in pencil and painted in acrylic artist's paint. The body armour and floral decoration on the trousers were coated in yellow oil-based paint and gilded using tinted oil size. The gilded surface was distressed using acrylic pigments and airbrushed with a fine spray of white acrylic paint (figure 4).

The conservation treatment aimed to preserve the original decorative order. It was felt inappropriate to replace the losses of the carved gallery tableaux as no record of the design is available. The loss of roofing material and  several lions did not intrude upon the visual appreciation of the gateway. However, the re-inclusion of the figures contributes to the appreciation of the overall scale of the model.

We are grateful for the work of Justin McMorrow, Senior Conservator at the National Maritime Museum, who contributed by superbly replicating the seated figures.