An insight into the craftsman's techniques 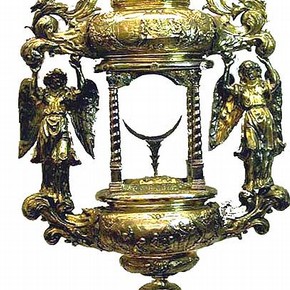 This article describes the conservation of a seventeenth century Dutch monstrance (Museum no. 303-1874), and the manufacturing techniques used to produce it. Recognition of the techniques and the materials from which an object is made allows for the selection of appropriate conservation treatments and a better appreciation of the craftsman's work for both the conservator and the museum visitor.

The term 'monstrance', from the Latin monstrancia (monstrare= to show), was originally used for any container made by gold or silversmiths to display either the Sacred Host or the relics of a saint. Today, the term is used specifically to refer to vessels displaying the Blessed Sacrament. They are used only in the Catholic Church, mainly for the ceremony of Corpus Christi.

The monstrance (Figure 1) was made in Haarlem, capital of the Province of North Holland, in the late seventeenth century. It is made of silver which has been partially  gilded (parcel gilt), decorated with white enamel, garnets, turquoises, rock crystal and pearl simulants. The imagery on the foot includes the  symbols for the Evangelists  and representations of three Apostles, Peter, James and John, looking up at the container for the host (representing the Transfiguration). Above and below the host are scenes which symbolise the Eucharist, Passover and the Fall of Manna from Heaven. 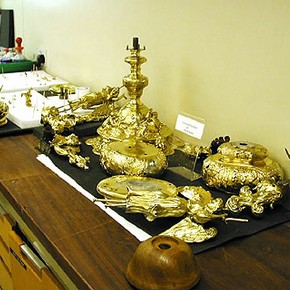 Previous unrecorded treatments may date back to the mid 1950s. Since then the surface has become heavily tarnished. The tarnish was concentrated in areas where the gilding had blistered, exposing the silver beneath. There were areas of distortion that were considered disfiguring to the object; and an old adhesive which secured two stone settings to the crown had broken down. After careful examination, it was decided to dismantle the object for treatment (Figure 2). By doing so the object could be seen from the inside which would aid in the identification of the maker and the methods and date of construction.

Once dismantled each part was recorded  using digital photography. The monstrance is made of silver, a metal that can be formed by cold-working and/or casting. In this case, there is evidence of both. Lost wax casting was used for the figures, scrolls and columns, and the central images of the Ascension and the Fall of Manna were cold-worked from a sheet of silver.  They are examples of repoussé work which has been chased (engraved). Repoussé refers to a method of tracing the design on the front and raising the relief from the back. Chasing work is done on the front of the metal piece. The tool marks from punches and tracers are visible on the inside. Chased, repoussé and cast pieces were joined with solder and also by mechanical means using screws and pressure fitting. 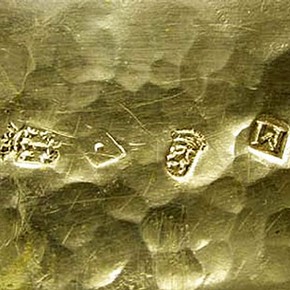 Once complete the silver pieces were mercury gilded. In this process it is possible to gild on selected areas of the metal. Pieces were gilded only where the metal can be seen to reduce the amount of gold required. The method of mercury gilding involves applying an amalgam of gold and mercury onto a degreased surface, usually silver or copper. The surface is then heated until the mercury evaporates, leaving behind the gold layer bonded onto the surface. This technique allows various layers of gold to be applied, and creates a tight bond with the substrate metal. To further confirm that this process was used on the monstrance, one of the  pieces was analysed using x-ray fluorescence. The results showed a residual amount of mercury on the surface.

The same set of four hallmarks was found on various parts of the monstrance, proving these to be all of the same provenance and maker (Figure 3). The first mark, a crowned lion, is of the Provincialen gekroonden Leeuw, which guaranteed a higher content of precious metal (875/1000) in Holland. 1 The second mark, the town mark, is of the town of Haarlem (as noted in existing Museum records). The date letter was found to be of a later date than the one in the Museum's records. It is from 1674. The maker's mark had not been previously identified because the only visible mark was indistinct. A clearer stamp was found when the monstrance was dismantled. It was identified as the stamp of Jan Van der Pille from Haarlem, Holland. He was a goldsmith working mainly on church metalwork during the mid seventeenth century. The museum records have been modified according to the findings. 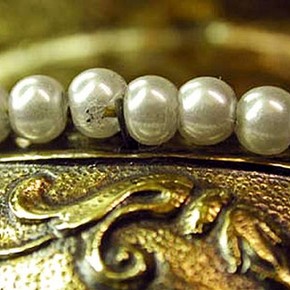 Treatment proposals were discussed with a metalwork curator. The treatment began with the removal of the old lacquer using acetone. The heavy tarnish was removed using Goddard's Long Term Silver Foam. Where this was not effective, Duraglit 'Silvo' Silver Polish Wadding was used. The surface was degreased with acetone and a coating of Frigilene nitrocellulose lacquer was applied with a brush to protect the surface from further tarnishing. The crown was decorated with gem stones and pearl simulants. Some gems were held in position with adhesive which  had broken down and  the gems had become loose in their settings. Once dismantled the adhesive was removed mechanically. Originally the gem settings would have been bolted into the crown and secured with a nut. The original pin was worn, so it was re-threaded and a nut made to secure the setting. The new pieces were carefully identified with a V&A logo micro stamp for future record. Further treatment options were discussed with a curator and it was decided to re-shape the distorted cross. The monstrance was then carefully re-assembled using the digital photographs as a guide. 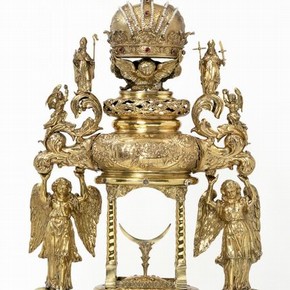 The bright lustrous pearls were in a fragile state. They were examined under the microscope for identification. It appeared that the pearls were made of thin glass filled with a waxy substance (Figure 4). The pearls were identified as  pearl simulants in the form of  small glass beads coated internally with a material called 'essence d'orient' and then filled with wax for internal support. This particular technique originated in France. Essence d'orient is a material made from ground iridescent fish scales (from the bleak fish) mixed with a lacquer. The time scale of this project did not allow for the possibility to treat the pearls, but a sample pearl was stored for future research.


Figure 5 shows the reassembled monstrance after treatment was completed. The information revealed by this treatment allowed records to be updated and provided a valuable insight into the craftsman's techniques