Conservation scientists, conservators and art historians can often obtain useful clues for the dating and authentication of art objects by identifying the materials used on them. For example, when pigment analysis is carried out on a museum object, it can reveal the presence of date-marker compounds, i.e. materials which have a first date of manufacture or, for other reasons, are unlikely to have been used for the decoration of a work of art produced at a particular time and place. This concept is exemplified by the analysis of five painted stuccoes from the Victoria and Albert Museum collection of medieval Hispano-Islamic panels (see Figure 1); The stuccoes are from the Alhambra Palace in Granada, Spain, and supposedly date from the 14th century. 1.Pigment analysis was requested by Victor Borges, V&A Sculpture conservator as an aid to dating. Samples of the pigmented areas of the stuccoes were first analysed by Raman microscopy, a non-destructive, non-intrusive technique which is particularly suitable for the identification of pigments (see figures 2 and 3). Subsequently, the samples were mounted as dispersions and examined by polarised light microscopy. 2 The identification of the pigments present on the stucco fragments as well as the evaluation of the shape and size of the pigment particles provided clues about the date of the fragments (see Table 1). 3 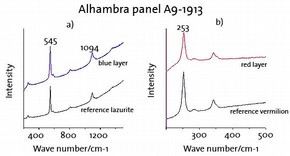 Figure 2: Raman spectra of a) lazurite from a blue area and b) vermillion from a red area on panel A.9-1913. Reference spectra of known samples of lazurite and cinnabar are also shown for comparison purposes.

Traditional materials were detected on four stucco fragments supposedly still covered by the original decoration. When mercury(II) sulfide (HgS, also called vermilion or cinnabar) was detected and identified by Raman microscopy, its particles examined by polarised light microscopy showed an irregular distribution of shape and size, as well as the presence of striations on some of the biggest particles. These features indicate that the red pigment is either of mineral origin, in which case it is more accurate to refer to it as cinnabar, or it is of synthetic origin, by means of the so-called dry process. Similarly, the particles of lazurite, seen under the optical microscope, showed the characteristics typical of a ground pigment, i.e. irregular size and shape, broken edges and non-uniform colour. This indicates that the pigment was obtained from lapis lazuli, and it is not the synthetic material called ultramarine blue, which was first synthesised in 1828. As expected for stuccoes, gypsum and occasionally calcite were detected in the mortar samples. 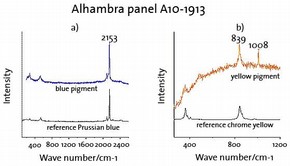 In contrast, modern pigments such as Prussian blue and lead chromate (also known as chrome yellow) were detected on stucco fragment A.10-1913 (see Figure 3). This indicates that either the whole fragment is a modern replica or the fragment is original, but was re-painted at some point in the 19th century. This 'terminus post quem' derives from the fact that Prussian blue was first synthesised in 1704, but it was not commercially available until the 1720s; on the other hand lead chromate, also known as chrome yellow, was first synthesised at the beginning of the 19th century. One of the fragments (A.10-1913) also shows traces of synthetic, wet-process vermilion, characterised by uniformly sized, small, rounded particles.

The analysis of pigments and materials found on these stucco panels from the Alhambra Palace in Granada, Spain, gave sufficient clues to hypothesise that one of the panels was not from the 14th century, as originally thought. Gypsum, and in one instance, calcite were detected in the stucco mortar, and traditional materials such as lazurite, cinnabar, and carbon black were detected on stucco fragments supposedly still covered by the original decoration. Pigments such as Prussian blue and lead chromate were found on one stucco fragment, which was therefore thought to be either an original fragment repainted at some point in the 19th century or a copy made in the 19th century. The latter hypothesis is supported by observations collected during the conservation treatment of the stucco fragments. 1

I am grateful to Professor Robin J.H. Clark, University College London, for kindly granting access to his Raman spectrometer for pigment analysis.