The Mazarin Chest (412-1882) is an extraordinary object of major cross-cultural significance, renowned as one of the finest pieces of Japanese export lacquer to have survived from the late 1630's (Figure 1). What makes the Mazarin Chest truly exceptional is the range of different techniques and the extraordinarily fine workmanship with which the lavish decoration was executed. Conservation is urgently needed to stabilise the poorly adhered lacquer and decoration in which much of the artistic, aesthetic, historical and technical value of this object is located. At present the Mazarin Chest is not stable enough for display or transport and is at some risk of further loss even if it simply remains in storage. 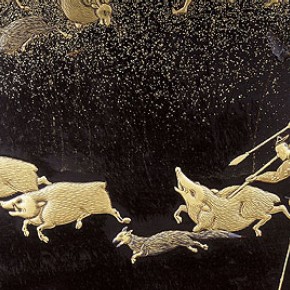 Figure 1. Detail of a hunting scene from the left side of the chest that shows the fine detail with which the chest was decorated; the boar are approximately 4cm in length (click image for larger version)

Although the Mazarin Chest is artistically and historically important in both Japan and the West, what is valued about the Chest in each culture differs. This in turn effects how the conservation of this object would normally be approached. In the West, conservators use a variety of materials and aim to work within the ethical principal of reversibility. Japanese conservators usually utilise traditional urushi-based materials and techniques that are non-reversible but maintain cultural continuity, integrity and authenticity.

The Mazarin Chest conservation project has two strands that will run over three years (Dec 2004 - Dec 2007). The first is an Anglo-Japanese collaborative conservation project. I will be working with Yoshihiko Yamashita, for three to four months a year, cleaning the Chest and consolidating loose decoration. We will discuss and critically evaluate Western and traditional Japanese materials and techniques in order to choose those that are most appropriate for each given problem.

The second strand is a scientific research project by Brenda Keneghan that will investigate three traditional Japanese conservation treatments - the treatment of a photo-degraded lacquer surface using the urushi-gatame process, the consolidation of foundation layers using mugi-urushi and the use of kokuso as a filler. The urushi-gatame process aims to strengthen the surface of light damaged lacquer without changing its appearance by impregnating the microcracks with dilute urushi, but removing all excess urushi from the surface of the lacquer. Mugi-urushi is a consolidant whilst kokuso is a traditional urushi-based filler. This research is intended to allow the project team to make well-informed, ethical decisions about the treatment of the Mazarin Chest and, by extension, similar lacquer objects in Japan and in the West.

The Getty has awarded the project a grant of £84,000, primarily to meet the costs of Mr Yamashita's time in the UK. The Toshiba International Foundation will also support the project. The V&A is making a substantial commitment of resources of photography, conservation, scientific research, curatorial input and website development. The Mazarin Chest project team are Fiona Campbell (website), Rupert Faulkner, Julia Hutt, Brenda Keneghan and Shayne Rivers, all from the V&A, and Yoshihiko Yamashita, a freelance lacquer conservator based in Tokyo, Japan.

The project team is grateful for the ongoing support of Albert Neher, Graham Martin, Sandra Smith and Carolyn Sargentson. We would also like to thank Jonathan Ashley-Smith, who supported this project from its inception in 1999.