The redevelopment of the main Islamic Middle East Gallery at the Victoria and Albert Museum has provided an opportunity to study and carry out materials analysis on a silk knotted-pile cope which has long been recognised as one of the most important examples of Safavid (Safavid empire, 1502-1736) pile-weaving of the 17th century.   Dating from about 1605, the cope combines Christian iconography together with the typical Safavid floral motifs and is unique in that it was clearly woven as a Cope rather than being made into a vestment from some other textile. Its history is unknown but it came to the Museum as fragments. There have been differences of opinion with regard to the religious community for whom the vestment was made, but the most recent technical examination and conservation research has provided new evidence which enlarges existing knowledge about the cope. Discoveries made during the conservation have enabled new conclusions to be drawn which define more clearly the origins of this vestment.  Dye analysis, metal thread analysis and other technical examination have also completed the documentation of this object. 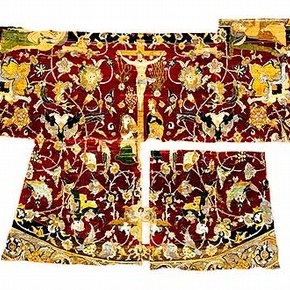 The cope had been last conserved about 50 years ago, but full conservation of the object was again necessary. The colours of the cope were remarkably fresh but the support crepe fabric had faded and the darned repairs were visually distracting and causing distortion. Small areas of weakness and loss of pile were apparent in many areas and although stitching was holding these areas to the crepe support there was no cohesion of structure to the cope fabric and many knots were loose.

It was clear that stitching the fragments to a new support fabric would not prevent loss of knots over time. The current conservation strategy would therefore need to incorporate additional support to secure loose knots and supplement the stitching method chosen.

In the previous conservation the cope was mounted in its cropped form. The orphrey (border) of the cope was for the most part missing and space had not been allowed to indicate where the boundaries of the orphrey would have been.  No sense was therefore given of the original dimensions of the cope nor the positioning of the Virgin and Angel Gabriel figures in relation to the orphrey boundaries and rest of the cope.

This time the cope would be conserved and mounted in such a way as to indicate its original size and shape and to give a better understanding of it as a complete object.  The conservation would involve removing all previous conservation and darning, then remounting the cope fragments in their correct alignment on a fabric marked out to the original size of the cope.

It was decided that the first phase of the conservation would need to support the fragile pieces on an adhesive treated film in order to prevent knots falling away and to give an overall support to the fragments. Although it would still be necessary to carry out couched repairs, the adhesive support would enable the couching to be kept to a minimum and limit the visual distraction of surface stitching.  A mixture of Lascaux 360 and 498 was chosen as the most suitable adhesive and Stabiltex as the fabric on which to cast the film.

When removing previous stitching, care was taken to avoid disrupting loose knots. Those which fell away were collected to be used for dye analysis. A few loose metal threads were also collected for analysis. Sufficient linen was prepared and dyed to colour match. A second piece of linen was prepared for use behind the dyed linen to give an additional backing and make the combined weight of the two closer to that of the cope fabric. Once all the old repairs had been removed and there were no surface distractions the cope was examined and areas of distortion noted. 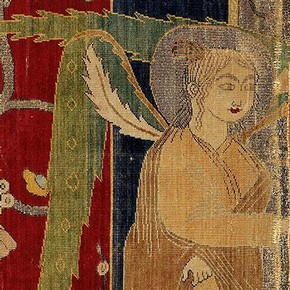 Figure 2. A detail of the cope, showing the Angel Gabriel (click image for larger version)

On the orphrey, around the Angel Gabriel figure, faint areas of loss were noticed which had originally been shapes worked in black silk. Most of the black silk had degraded and fallen away leaving poorly defined worn areas. It was not immediately clear what these represented but examination of this area from the back of the cope revealed that these areas appeared to be part of a script. A tracing of the shapes was taken, and this was compared to the back in order to make certain the tracing recorded the shapes correctly. The script was incomplete but clearly formed a part of a larger text. Dr Vrej Nersessian, an Armenian scholar from the British Library, was consulted and confirmed that the characters were Armenian. Although incomplete, the text remains were recognisable as an abbreviated form of the Magnificat. It was now possible to fit the characters forming the complete text into a digital image of the reconstructed cope.

A tracing was made of all that remained of the orphrey. The remains of a curved red line worked into the design were noted. This line, situated beneath the feet of the Angel Gabriel figure, was not part of the floral design and served to delineate a change of colour in the metal thread used on the orphrey ground.  It also appeared to mark a boundary to the text.

Taking the crucifixion scene on the centre back as the measuring point, the design of the two halves of the cope are predominantly worked as mirror images of each other. The figures of the Angel Gabriel and of the Virgin Mary are symmetrically placed so when the cope is worn these figures face each other. Logically, it would follow that there should also be a line by the feet of the Mary figure and that the text could therefore be defined within the boundaries of these two lines.  More of the orphrey was missing by the Virgin Mary figure so there was no remaining evidence of this line.

The first phase of supporting the cope was carried out using a vacuum hot table.  Once supported, the fragments were placed upon the prepared double layer of linen and aligned in their correct position. They were tacked in place to help prevent creep and any misalignment occurring as the cope was being couched. The fragments were couched to the support linen and the excess adhesive film support was trimmed away back to the fragment edges as work progressed. Split areas were couched, although it was possible to keep this to a minimum due to the overall adhesive support.

The size of the cope and boundary line was calculated by taking measurements from various points where small fragments of the outside edge of the border remained. This was marked with a line of tacking. The linen support was turned back to this line and herringbone stitched. The cope was then stitched to a fabric-covered Hexalite board which had been cut to the shape of the cope. The cope was intended to be displayed in a sealed case so it was not framed at this time.

The conservation work was carried out in the Textile Conservation studio over a period of six months. During this time the relative humidity (RH) was generally low, averaging no more than 35%. Coinciding with the time of mounting the cope, the museum heating was turned off and there was a severe rainstorm. The RH rose to 55%. Consequently the cope reached equilibrium with this and sagged on the mounting board. This caused a dilemma. It was a simple matter to release the stitching holding the cope to the board, re-stretch the cope and re-stitch it, but this would put unacceptable tension on all the conservation stitching when the RH returned to the more usual 35% level or less. This illustrated undeniably the need for strict environmental control for this object, as it was due to travel to a multi-venue exhibition. It was agreed that the best solution would be to seal the cope in an environmentally controlled frame. Time did not permit for this to be done before shipment to Washington, the first venue of the exhibition, but it was agreed that it would be done before the object was shipped to the second venue.

While the cope is on exhibition, work is ongoing to complete the reconstruction of the text and to recreate digitally the missing areas of the cope. A full article expanding the conservation details and discussing the history, iconography and significance of the text is in process and should be ready for publication by early 2005.