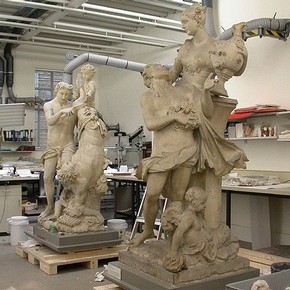 Figure 1. The two sculptures in the V&A Sculpture Conservation Studio (A.6-1967) (A.5-1967). Photograph by Sofia Marques (click image for larger version)

Apollo Flaying Marsyas (A.6-1967) is one of two life-sized marble sculptures that were originally commissioned by the King of Poland and Elector of Saxony, Augustus the Strong from the Venetian sculptor Antonio Corradini (b.1668; d.1752) between 1723 and 1728 for the gardens of the Höllandisches Palais in Dresden.

In 1836, this group of figures and its pendant Zephyrus and Flora (A.5-1967) were sold, and soon afterwards entered the collection of Easton Hall, Lincolnshire. They were acquired by the Victoria and Albert Museum in 1967. The sculptures are not linked by subject matter, but they were listed sequentially in the Dresden inventory and auctioned together.

Both sculptures, Apollo Flaying Marsyas and Zephyrus and Flora (Figure 1), are now occupying a place of importance flanking the door leading to the new garden that was inaugurated in July 2005.

This short article invites the viewer to share with the conservator some observations made while treating Apollo Flaying Marsyas, to think of its original appearance, the process of carving and previous conservation treatments.

At first glance, the surface clearly shows signs of weathering and environmental pollution - the surface looks grey (especially at the bottom), rough, and is fairly porous. Some details of the carving have, as a result, lost their original sharpness. In the conservation of such a piece I have tried to enhance the carving and volume in order to reinstate what has been lost over time. This has been partly achieved through selective and careful cleaning. The conservator is in a unique position to observe the details created by the artist through the very act of cleaning. 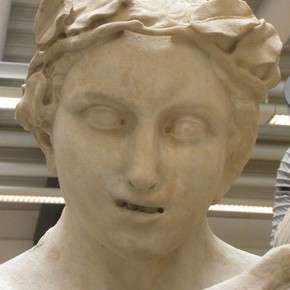 The satyr Marsyas was a flute player who challenged Apollo to a music contest. He was defeated and was consequently at the mercy of the god, who decided to flay Marsyas alive as a punishment for losing. The realism of the facial expressions of Apollo and Marsyas became evident during the cleaning process (Figures 2 & 3). Apollo's eyes reveals what is in his mind, a mixture of cruelty, superiority and fury, while Marsyas is in great pain, despair and anguish. His eyes look upwards, and his tongue lolls to one side.

Close examination of the surface also allowed me to recognise areas of unweathered stone, and has enabled me to recreate in my mind's eye the original appearance of the surface: a pure white, polished marble. The weathering observed is both natural and artificial. The sculpture stood outside in all weathers for more than two hundred years. The cracks found at the base might well have been caused by water infiltration, followed by an expansion of water during severe weather in winter. A black crust (sulphation) caused by environmental pollution also formed on the surface over the years. Micro-organisms have grown in the pores of the marble (this is especially visible on the bottom half).

In addition to this natural decay, a major conservation operation took place when Apollo flaying Marsyas was acquired by the Museum, in order to eliminate both the obscuring crust and the micro-organisms. The general appearance was undoubtedly improved, but not without some risks. Various poultices were used, as well as ultrasonic dental tools. Despite the care taken, this last tool caused some damage, and lines in the marble can be observed where the tool abraded not only the crust but the original marble. 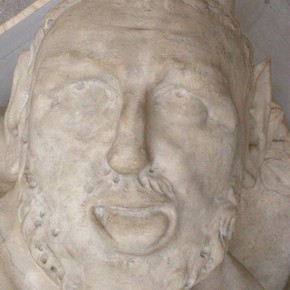 Elements of the carving have been lost over time. Several attempts have been made to replace these. In the 1968 intervention, corrections were made to the replacement pieces following the discovery of an early print (Figure 4). This print was taken from an early set of illustrations of the Dresden marbles, the Recueil des Marbres Antiques qui se trouvent dans la Galerie du Roy de Pologne a Dresden compiled by the court architect of Augustus the Strong, Raimond le Plat, in 1733.

The entire knife and index finger held by Apollo were altered on the basis of this. These added elements were made of a mixture of a hard paste, glass chips, crushed and sieved to the grain-size of the original marble and mixed with epoxy resin. The resin has, since then, severely darkened. As the cast elements are of good quality, it was decided at this point only to touch up with paint the discoloured areas to match the original colour of the marble.

It is important to mention that Apollo flaying Marsyas was carved from one block of marble. The back was never meant to be seen, which explains why the surface has been left rough (tool marks are still visible) and is flat. The wings of the angel on the right at the top are now missing, but the proper left one appears in Le Plat's illustration. This gives an indication of the shape and angle of the missing wing.

The back of the angel currently has two white shapes of unweathered (but not polished) marble at the wing position. There is a lip around the edge of the proper left one, suggesting that the wing was originally carved from the same block of marble. We can presume that the side wing was broken at some time in the past, and the broken edge was then cut back to the level of the back in order to fix a replacement. The second white mark has two holes, one still with a rusted iron dowel in it. This supports the idea that there would have been later additions or, at least, repairs. 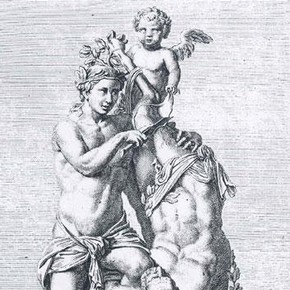 Corradini pushed his art and technique to the limit, and ingeniously made use of the whole block of marble by designing the wings from within the block. Zephyrus and Flora similarly exemplifies his skilful technique. In this sculpture, the artist also carved the wings of the angels from the same block (although only one now survives intact), but this time, the wings protrude backwards, again efficiently using the entire block of stone.

Finally, there is another interesting aspect of Corradini's technique while carving this large sculpture. In order to carve all the different elements at the top - Marsyas' legs, the tree trunk, and Apollo's head - the artist decided to omit the right arm of the angel that was not meant to be seen from the front, in order to give himself more room to work on these elements from the back of the sculpture. The right arm has therefore been left flat, with tool marks showing the use of claw chisels, normally used to rough out the stone.

The great achievement of Apollo flaying Marsyas is in my view the figure of Marsyas, carved upside down, and yet with a real sense of gravity that can be seen in the musculature.

I hope this article has not only contributed towards the understanding of certain aspects of the carving process of Apollo flaying Marsyas, but has also given an idea of the challenges the artist set for himself. Working on such large sculptures requires virtuoso skills and good health. Corradini died at the age of eighty-four, and was about sixty years old when he completed these large sculptures. He became well-known for his veiled female figures, and developed a compelling mannered style, especially in his representations of the human form. He displayed his mastery of working marble by bringing it to life.