The development of English black japanning 1620-1820 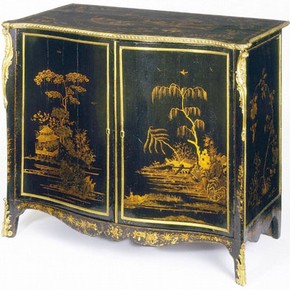 Oriental lacquer objects were first imported into Europe in the late sixteenth century. Imitations of lacquer and other decorative surfaces by European craftsmen using their own materials and techniques were known as 'japanning'. The art of japanning evolved in the next two centuries, as new varnishing methods were developed, and additional materials became available. Japanned objects consist of a variety of materials that were often applied in complex layer structures. The different properties of the numerous substances can cause stress, which in turn damages the coating.

Black japanned surface coatings which were produced in England and Wales between the seventeenth and the nineteenth centuries (Figure 1) were the subject of my final year research project, part of the RCA/V&A Conservation Course. In order to provide a better understanding of japanned surfaces and their conservation my studies concentrated on the following aspects:

This article presents a brief summary of the main issues of my studies.

The Portuguese were the first to discover and conquer cities in India, China and Japan in the sixteenth century where they set up trading centres to supply Europe with a variety of Oriental goods, such as spices, silk, porcelain and lacquered objects. Raw materials such as shellac and mother-of-pearl were also imported. However, it was not before the seventeenth century, with the foundation of 'The Governor and Company of Merchants of London Trading into East Indies' in 1600 (later the 'Honourable East India Company'), that Oriental lacquer objects were imported into Britain on a large scale.

In the beginning of the seventeenth century first attempts were made by English craftsmen to imitate imported Oriental decorative objects. But the big Oriental boom and great production of japanned objects with spirit varnishes started with the reign of Charles II in 1660. Oil varnishes were developed in the early eighteenth century which were applied to new materials, such as tinplate and from the 1770s on, increasingly to papier mâché. These opened new possibilities for utilisation, for example coatings for coaches and all kinds of household items, especially tea trays. Pontypool in the south of Wales was the first place in Britain to produce tinplate in the 1720s and became later the leading centre for the production of japanned metal objects. 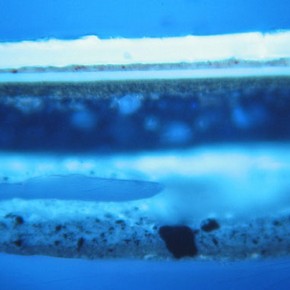 A great number of materials were employed for the manufacture of japanned objects. A typical structure for a japanned surface is a combination of base, ground, varnish and decoration layers (Figure 2). These layers can be made of various materials, such as wood, leather, whiting, natural resins, alcohol, oils, pigments, metal leaves and powders. In the beginning the most common base material for japanned furniture was certainly wood. Almost all japanned surfaces produced in the late sixteenth century were made from spirit varnishes (natural resins in alcohol), often applied onto a whiting ground.

Decoration layers were often made of metal leaves and powders, or gold paint, depicting chinoiserie scenes. Later, in the eighteenth century, tinplate and papier mâché were primarily used as substrates, and were covered with the more durable and resistant oil varnishes (natural resins in oil). Polychrome floral designs became the common form of decoration.

Parallel to the rising manufacture of japanned objects, methods of production were written down in recipe books in order to provide guidance for the professional as well as for the amateur. Historic treatises were written throughout the history of japanning and present information about the development of japanning with view to availability and use of materials, changes and improvements of application techniques, and social functions of japanned objects. The following books were analysed and partly reproduced for this project: John Evelyn's Sylva (1670), William Salmon's Polygraphice (1672), John Stalker and George Parker's A Treatise of Japanning and Varnishing (1688), 'chiefly the MSS. of the Great Mr. Boyle' The Method of Learning to Draw in Perspective made easy and fully explained (1732), Robert Dossie's The Handmaid to the Arts (1758). A clear development of materials and techniques could be observed, as well as progress in layer structures and production methods.

Four japanned cabinets from the V&A's collection were examined as part of this study. The cabinets were all almost certainly made in England between 1620 and 1820. Three of the four cabinets have a uniform black varnish coating; one is varnished in several colours in imitation of tortoiseshell and is covered, at least partly, with a black coating. The examination included visual observation of the objects with the naked eye, and visible and ultraviolet light microscopy. The following deterioration patterns could be identified:

I am grateful to Dr Nigel Bamforth and Alison Richmond for tutoring me during this project. I would also like to thank Dr Lucia Burgio, Margaret Ballardie, Nicola Newman and Miho Kitagawa for their help and advice.