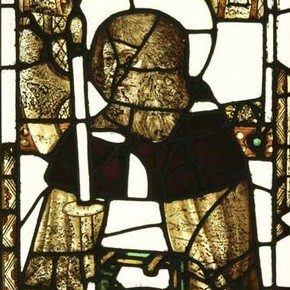 The Museum has recently acquired two early sixteenth century panels (C.12-2004 and C.13-2004) which belonged originally to the extensive and celebrated decorative scheme at Fairford Church in Gloucestershire. Showing the upper two-thirds of the apostle Matthias and an angel, the panels shed valuable light not only on English Late Gothic glass but also on the processes of restoration in the eighteenth and nineteenth centuries (Figures 1 & 2).

The stained and painted glass at Fairford is the most extensive glazing programme still surviving in any English parish church. Twenty-eight windows have been preserved, all dating from the period c.1500-15, and together with those at King's College Chapel, Cambridge, they constitute the greatest ensemble of Anglo-Netherlandish glass in existence.1

The Fairford glass escaped iconoclasm but not the effect of weather, and in 1703 a storm badly damaged the upper part of the great west window and several windows on the south side of the church. These were subsequently repaired, using the fragments that had been blown out and replacement glass, but in the middle of the nineteenth century further interventions were made which were responsible for the removal of the V&A's figures.

First, in about 1860, a window (s.VIII) in the south aisle, next to the entrance porch, was repaired by Chance Brothers of Smethwick. This window contains four standing figures of the apostles, and of these the two westernmost (Sts Jude Thaddeus and Matthias) were effectively replaced with new figures, utilising only a few original fragments.2 Most of the two figures was taken away by the restorers and since the early 1860s had been lost sight of. 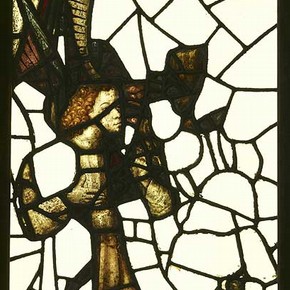 The second campaign of restoration undertaken by Chance Brothers, carried out in about 1861-62, was much more controversial. This consisted of replacing the entire upper half of the great west window, dedicated to the Last Judgement, with a new if faithful version based on what had survived the 1703 storm. Despite protestations to the contrary, the restorers certainly removed all the old glass and in 1890 Canon Carbonell of Fairford, who did more than any other to protect and preserve the glass in the second half of the nineteenth century, claimed that W. E. Chance 'had the greater part of the old glass in his possession, leaded up and framed'.3

This was confirmed by the appearance of the two V&A panels at the time of their acquisition in 2004, which were both tightly framed in wood. The Museum's angel originated from the bottom left hand side of the upper part of the Last Judgement and, with the exception of one other angel's head now in the Getty Museum, is the only fragment of the Fairford west window to have resurfaced.4

The two panels had lain unnoticed in the workshop of G. King & Son of Norwich, the renowned restorers of stained glass, until its clearance in 2003, and their history after the early 1860s is not known. It is likely that they were passed from Chance Brothers to other restorers or were perhaps sold to be used as stopgaps. Long before 2003 their importance had clearly gone unrecognised. Given the recent reappearance of these fragments and the further angel's head, there is the chance that other pieces from Fairford will eventually be identified.

The panels were prepared for the new Sacred Silver & Stained Glass gallery by Kathrin Rahfoth in 2005. They had previously been re-glazed into two panels measuring approximately 910 mm x 560 mm with clear, unpainted glass surrounding the original fragments. The way the panels were glazed presented a challenge for display in the gallery. As the majority of the glass is clear, it allowed too much strong light through, making it difficult to read the detail and colours of the medieval glass. The clear glass also allowed the viewer to see into the lightbox behind the panels, which presented a distraction. 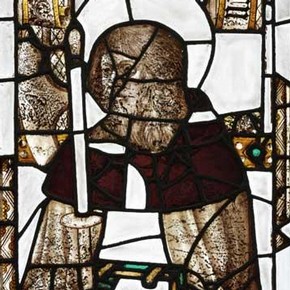 Possible solutions to these problems were discussed and agreed by the curator, head stained glass conservator and conservator. What at first looked to be random shapes of clear glass leaded to surround the medieval glass did in fact have some basis in the original window design.

Replacing this clear glazing with coloured painted glass to match the original window design would not have been possible without extensive research and would not in any case have been desirable. It was decided that something should be added/painted onto the clear glass of both panels to allow the medieval fragments to be more easily read and to obscure the contents of the lightbox.

The criteria used to select the paint medium was that it should be easily reversible, should not come into contact with or harm the original medieval fragments, should last for as long as the panels are expected to be on display in the new gallery without fading or peeling and should not wipe off during handling and installation.

To select the most appropriate paint medium, a test panel of clear float glass and lead was constructed. Each section was painted with a different medium using both matt (smooth) and stipple (allowing small pin pricks of light through) applications to determine the best and most effective treatment.

Each medium was applied to the test panel using both a stipple and matt finish to determine which was the most effective in diffusing the light, hiding the lightbox and allowing the eye to read the medieval glass more effectively. 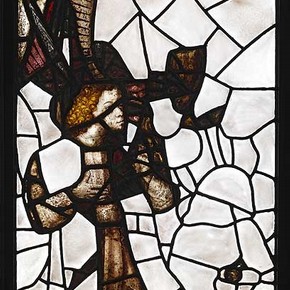 The glass paint mixed with gum arabic applied as a stipple finish produced the best result. Having determined the medium and application method it was necessary to decide on a colour that enhanced the appearance of the medieval glass without dominating it. Various colours were tested directly on several sections of the clear glass adjacent to the original fragments. Both panels needed to be treated with the same colour finish since they have the same origin and history.

The chosen colour worked well with the predominantly red tones of the St. Matthias panel and the predominantly green tones of the angel panel. Tests showed that a mix of brown, green and black provided the right level of colour to make the clear glass recede and the medieval glass stand out. It also intensified the colours of the medieval glass, adding to the dominant effect (Figures 3 & 4).

The panels were brushed to remove dust prior to cleaning with a solution of ethanol and deionised water 1:1 on cotton wool swabs to remove grease and to enable an even covering of cold paint. Breaks in the clear and medieval glass were bonded using HXTAL NYL-1 epoxy resin then retouched using acrylic paint. The clear glass was painted on the back surface with the glass paint mixed with water and 20% gum arabic.

The final solution met all the criteria demanded for the museum environment. It can only be used in a controlled climate, however, so this solution would not be suitable for panels installed in an external architectural setting unless effective protective glazing was employed.

Thanks are due to Dr Tim Ayers for his assistance in the acquisition of the panels. Kathrin Rahfoth would like to thank Sherrie Eatman and Ann Marsh for their feedback during difficult stages of this project.