Conservation of a Jewelled Bouquet

The Victoria and Albert  Museum houses one of the world's greatest jewellery galleries, with over 4000 objects spanning from Ancient Egypt to the present. As part of V&A FuturePlan the gallery is undergoing refurbishment, creating an opportunity to carry out research and conservation of the collection. This paper describes the conservation of a late eighteenth-century Spanish bodice ornament (Figure 1), which will be displayed in the new galleries planned to re-open in 2008. A brief description of the materials and manufacturing techniques of the bodice ornament, factors affecting its stability and some problems faced during treatment will be discussed here. 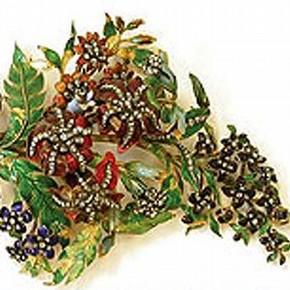 For most of the second half of the eighteenth century large bodice ornaments were highly fashionable throughout Europe, flowers being one of the popular themes. They were sometimes up to 20 cm long and of a considerable weight, decorated with precious gems such as diamonds, rubies and emeralds, and also with enamels. Unfortunately only a few survive today, and others can only be admired through illustrations from the period.One surviving piece is an enamelled and jewelled bouquet (museum number 319-1870), dated between 1780 and 1800. The object is a bouquet of flowers tied with a bow, in enamelled gold, and diamonds set in silver.  It is said to have belonged to Doña Juana Rabasa, wife of the Finance Minister of Charles IV of Spain. The jewel was donated to the shrine of Our Lady of the Pillar at Zaragoza. In 1870 it was acquired by the V&A, together with other jewels, when the Cathedral authorities sold off treasures presented to the shrine in order to complete their building programme.

The main body is made from sections of pierced and formed gold sheet, textured by chasing and engraving the surface to create the effect of leaves and ribbon folds. The various parts were individually enamelled, with both opaque and translucent colours. Enamel is made by mixing glass, flint or sand, red lead and soda or potash with a metallic oxide,  used as a colouring agent. The translucent enamel on the ornament was produced in the basse-taille method, which entails firing the enamel onto an engraved precious metal substrate , an effect used to create a sense of depth within the object. 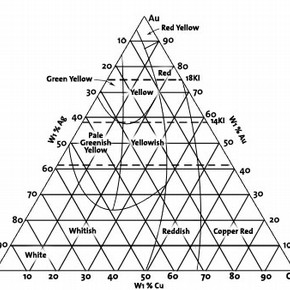 Table 1. Fig. 1 shows a triaxial diagram of gold-silver-copper alloys. Reproduced with permission from Glass on Metal 1986, vol. 5, no. 6 (click image for larger version)

Gold and silver are preferred for transparent and translucent enamels as they are reflective materials and do not oxidise readily beneath the enamel during firing. Fine gold is not suitable for enamelling due to its softness and low melting temperature.1 A gold alloy substrate used for enamelling may have been of 22, 18 or 14 carat, or anywhere in between, with silver and copper as additional components in the alloys. These metals are added because they ensure that the final alloy has a higher melting point and hardness than that of pure gold.  Table 1 shows gold-silver-copper alloys and the resulting variations not only in the colour of the alloy but also in the colour and brilliancy of the enamels. The areas producing the best transparent colours are "Red Yellow", "Yellow", and "Yellowish".2

Apart from the design aspect, enamelling on small separate areas diminishes the  likelihood of  cracking and flaking of the enamel occurring as a result of thermal expansion and contraction. This may have been a technical consideration for the goldsmith/enameller. Furthermore, the coefficient of expansion of the gold alloy was also diminished by the thickening of the edges of each section, causing less distortion when heating and cooling, and, therefore, less differential movement between the enamel and the metal interface.  The thicker walls also create cells for the enamel and protect these from physical damage.

Rose-cut and brilliant-cut diamonds are set in silver and the collets riveted to the gold alloy. These sections in turn are attached by pressure fitting and by the use of thin gold wire. The sections have to be joined mechanically, as a heat joint, i.e. soldering, would damage the enamel. 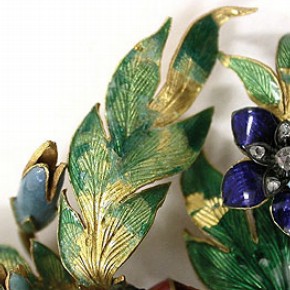 Before conservation, the bodice ornament was structurally unstable, with movement to some of the sections and loose and fractured enamel. The intrinsic delicacy of the ornament has undoubtedly contributed to the deterioration of the enamel. The enamels were cracked (Figure 2) and there was loss caused at least initially by physical impact. There were loose fragments held in place by surface dirt and accretions. Cotton wool fibres were found in crevices and difficult to reach areas, possibly from previous treatments. There is no evidence of poor quality enamelling, air bubbles or stress cracks. The glass does not appear to have suffered chemical deterioration. Figure 3 shows the stages of damage caused by the physical impact. The crack in the enamel has caused the gold alloy to tarnish, and the tarnish in turn has weakened the adhesion at the glass-metal interface causing the loss of enamel.

The gold alloy has become tarnished as the alloying elements, copper and silver, have reacted with air pollutants such as hydrogen sulphide and carbonyl sulphide and possibly acidic gases released by unstable materials used to manufacture display cases. The resulting tarnish layer contains sulphides of silver, gold-silver, and/or copper. The silver settings have also tarnished, causing a layer of silver sulphide to form.  This is one of the most insoluble salts known, and can only be dissolved with complexing agents such as thiourea or removed mechanically. Very low levels of hydrogen sulphide in the air are enough to cause a film of silver sulphide. As the glass does not appear to have deteriorated chemically, it can be assumed the levels of temperature and relative humidity were fairly stable.. Furthermore, the layers of dirt on the enamel would have been ideal micro environments where moisture would have concentrated and caused instability, and this has not been the case. 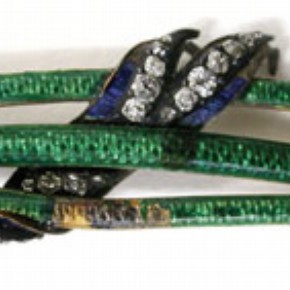 Diamonds have been set in silver to make the stones appear bigger and whiter. This characteristic has been lost due to the dark grey/black tarnish.

The stability and physical appearance of the object were the main factors in considering the appropriate treatment.  After considering the options available, it was decided that some interventive treatment was required to reduce the risk of further loss to the enamel. Since the object is composite, all materials had to be taken into account.

Paraloid® B72 (ethyl methacrylate/methyl acrylate copolymer, 10% solution in ethanol) was used as a consolidant, offering the benefits of reversibility, long term stability, compatibility with alkaline materials and an appropriate  glass transition temperature.

The fragility of the enamel was taken into account when considering the removal of the tarnish. Chemical treatment was not an option as the solvent may become trapped in between the enamel and metal causing further deterioration. Mechanical removal with minimum abrasion was chosen as the safest treatment. Surface tarnish had to be left in difficult to access areas where the enamel layers might have been at risk. The consolidation was carried out at the same time and, where possible, after degreasing and removing surface accretions. Loose pieces of enamel were degreased and re-attached to their original position.The gold and silver alloys were not coated as this was not a practical method of protection.  The ornament was stored in an Intercept Protector®3. The display cases will be equipped with silica gel compartments and monitored with the Museum's OCEAN system4 bag and placed in controlled storage, ready for display in early 2008 (Figure 4). 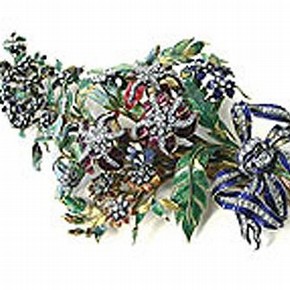 If interventive conservation had not taken place it is highly likely that further loss of enamel would have occurred. The appearance of the enamel was improved not only by the consolidation treatment but also by the removal of the accumulated layers of dirt and previous cleaning products.

By storing the object in a controlled environment and by sealing the object in an Intercept Protector® bag, the ornament is protected from further deterioration. It is intended that future display should maintain this stable environment, with limited fluctuations of relative humidity and temperature.