During the last few years the V&A has been progressively unfolding its ambitious FuturePlan to show more of its world-class collections in newly designed displays within galleries restored to their period splendour. These major projects have been slowly transforming areas of the V&A into new spaces, radically reshaping the interior profile of the Museum.

Throughout this process of transformation the Sculpture Conservation Studio has played an important role, particularly during the last year when four projects began to take shape: The Dorothy and Michael Hintze Sculpture Galleries, the Museum's new Café, the exhibition At Home in Renaissance Italy, and the Medieval and Renaissance Galleries. 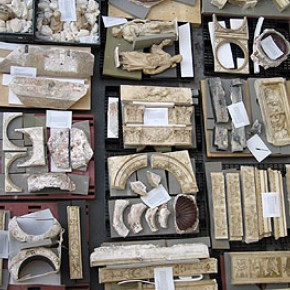 The completion deadlines of these large projects have required the decant of eleven different galleries and the de-installation of more than 40 objects of middle to large scale, most of which had been built into the fabric of the Museum decades ago. The de-installation of such a large number of "dormant giants" in little more than a year is probably unprecedented in recent Museum history. It has required an immense amount of effort and resources, and is proving to be an enormous challenge.

The nature of these objects are extremely varied, for example doorways, altarpieces, tabernacles, fireplaces, chimney pieces, tympanums, church monuments and architectural roundels. All of these date from the fifteenth to the eighteenth century with a particular emphasis on Italian Renaissance. Materials ranged from marble, the most predominant, to Istrian stone, limestone, black slate, terracotta and stucco. The techniques of manufacture included carving from low to high relief and sculpture in the round. Other techniques were also present, such as gilding, polychromy, glazing, stucco casts and scagliola panels.

All objects were situated in two main areas of the Museum, Gallery 50 in the south-east wing of the building, and in the galleries around the John Madejski Garden (Galleries 12 to 16 and 21 to 24).

The precise dates when many of the pieces were originally installed were unknown, although through the study of the type of building materials, fragments of newspapers and notes found, it was possible to establish two very clear periods when the construction took place.

The work in Galleries 21 to 24 could be dated to the late forties by a note, signed by the mason Mr O Barnes and the craftsman Mr Ellis on 27 May 1948, found behind an Italian tympanum. As was typical in those galleries, this object was very solidly put together with a profusion of cement, bricks, scrim, plaster, fish tale copper and iron brackets, and wooden and lead spacers. These materials made the releasing operation very slow, extremely laborious and physically demanding.

For Galleries 12 to 16 and 50, the interventions had the more recent date of the early 1960s to 70s. The materials were less robust, with an abundance of plaster, light mortars and brackets made of thin copper rod. However, it is certainly the case that this 'soft approach' was not applied to the doorways which were firmly cemented into the walls.

Prior to the de-installation, a detailed survey of every object was completed, assessing conservation conditions, mounting-construction methods and the logistics involved in the removal of every component. Reports and estimates were drafted and details were discussed with Technical Services (a section within the Collection Services Division) to finalise the whole of the program. The teams were comprised of sculpture conservators, who took care of the conservation treatments and the release of objects from walls, and technicians, who were in charge of removal, transport and storage. Certainly, there were many difficult occasions when the close and comprehensive collaboration of both sides proved to be crucial for the successful accomplishment of many difficult de-installations. In this respect it is worth noting that some objects came off the wall in more than 65 pieces (Figure 1) or that some components weighed almost a tonne (Figure 2). 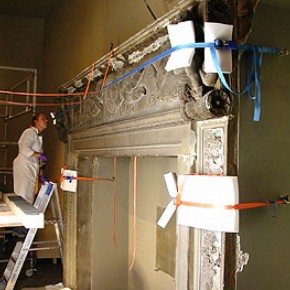 The procedure followed was generally consistent for all the different objects with some slight adjustments to meet specific requirements. The releasing of the different components or parts was always initiated at the top of the object. This task was carried out mechanically and by hand, using mallets and chisels of different weights and sizes as well as other smaller tools. Electrical tools, such as power drills, were used when it was required but only if the condition of the object would allow it. Some parts, due to size and weight, had to be strapped and secured to the wall as they posed a high risk during the process of releasing. The last step was to remove or cut the different metal fixings holding the object to the fabric of the building, so that the technicians could move the component from its location onto a supporting pallet, tailored to fit the profile, size and weight of the part to be moved. This last operation was at times extremely complex and very sophisticated systems were devised by the technicians facilitating the process enormously. Finally, the fragment would be lowered to the floor by a variety of lifting equipment.

Due to the condition of the constituent materials of some of the objects, before these operations could be carried out, emergency conservation treatments had to be undertaken. These mainly consisted of facing and protecting with paper tissue and an acrylic based emulsion the areas found with crumbling stone or flaking polychromy.

These de-installation operations continue to occupy most of the resources in Sculpture Conservation, which still faces even bigger challenges in the near future when Gallery 50 will be completely decanted. Nevertheless, some of the objects can already be enjoyed again by the public as, following the conservation treatment, they have been re-housed in The Dorothy and Michael Hintze Sculpture Galleries and some will be temporarily displayed in the At Home in Renaissance Italy exhibition this autumn.