The conservation of twelve glazed terracotta roundels depicting the twelve labours of the year, ascribed to Luca della Robbia (b. 1399-1400; d. 1482), has been an ongoing project for the sculpture studio of the Victoria and Albert Museum for the past year and a half.

The roundels were taken off a wall in gallery 12 in February 2005 in view of being displayed in the At Home in Renaissance Italy exhibition (October 2006 - January 2007).  As part of V&A FuturePlan, they will also be displayed in the new Medieval and Renaissance galleries due to open in 2009. 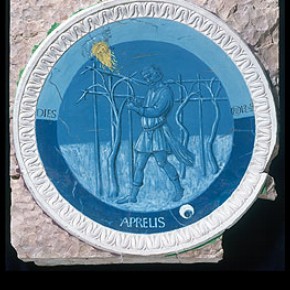 This group of glazed terracottas is thought to have come from the ceiling of Piero de Medici's study room in the Palazzo Medici in Florence and was produced around 1450-56, which is when it is believed the decoration of the ceiling was undertaken. The room was unfortunately destroyed after the palace was sold in 1659 to the Riccardi family. Historical sources and architectural plans of the original building suggest that this study room was fairly small (around 10 x 16 ft) and had a vaulted ceiling. This explains why the roundels are all concave and a curvature can be seen on each of them (eight are curved along the horizontal axis and four along the vertical axis). Vasari, in his life of Luca della Robbia, writes: 'the great Piero di Cosimo di Medici, who was among the first to have Luca make things in coloured terracotta, commissioned him, for the study in the palace built by his father Cosimo, to make a barrel vault, with various fantasies, and to treat the floor similarly'. In his Trattato d'Architettura, Filarete also refers to the study saying: Cosimo had a 'very ornate study, the pavement glazed, as is the ceiling, in much esteemed designs so that all who entered admire it greatly'. The floor of the study would have therefore also been covered with glazed tiles.

The roundels survived the destruction of the study room although they must have been, at this point, already severely damaged, and seem to have then been part for some time of the decoration of a fountain, near Florence, also belonging to the Riccardi family.

The Victoria and Albert Museum acquired the roundels in 1861. There are no records as to where they were displayed until they were redisplyed in gallery 12 in the 1960s. The roundels are in fact square. They measure approximately 60 x 60 x10cm and are known in architectural terms as coffers.1 Little has survived of the corners, which explains why only the decorated round part of the coffer could be seen until recently.

The decorated surface was achieved by hand painting blue and white glazes of different shades on a flat surface. Yellow and black glazes have also been used to a small extent. A white leaf moulding surrounds the painted subject. The remaining parts of the corners, still show traces of a bright green and a porphyry colour glaze. It is not known whether these corners were painted with one solid colour or had a pattern.

The subject of the labours of the twelve months is based on contemporary agricultural practice and on descriptions of activities in classical texts such as Columella's De Re Rustica, a copy of which appears in Piero di Medici's inventory of 1465. The circular border around the subject, which is painted in light to dark blue and varies in length, relates to the hours of day and night. In the lighter part, the symbol of the sun appears in yellow in the appropriate House of the Zodiac. In the darker part the moon glows in a white glaze.

It was obvious from the retouched areas observed on the glazed surface, that all of the roundels had suffered structural problems. However, nobody  realised the extent of the damage. It appeared that all of the roundels were backed  with a thick layer of plaster and scrim, those being, in most cases, the only elements keeping the fragments together.
The curator's intention was to display these now fragile objects on a structure similar to the study they were originally made for, so it was essential to consider the various  mounting options.

Reducing the weight by removing the plaster  from the reverse became the first priority as each of the roundels were going to be placed face downwards in the new display. Another main concern was to find a method and a material for joining the fragments back together to fulfil the display requirements. The adhesive needed to be sympathetic to the nature of the soft terracotta and yet be strong enough to hold the large fragments in place.

When considering these imperatives, it was necessary to thoroughly research all of the available adhesives.. The tensile strength and the viscosity of the adhesive, the evaporation rate of the solvent it is mixed with, the ageing properties, the level of reversibility, the shrinkage and the glass transition temperature (Tg) of the resulting mixture are clearly all extremely important factors when making an appropriate selection. The opportunity for direct research and material testing was not available on this occasion, but the information gathered from studying the available literature reading turned out to be relevant.

Adhesives traditionally used for the repair of terracotta objects such as natural resins, mastic and proteins are either too weak for the purpose, have a low Tg, are prone to biological growth or have poor ageing properties and therefore were ruled out.
Cellulose-derived products present advantages because they are easy to use but some believe them to be unstable as adhesives and impractical in some cases. Most vinyl acetate-derived polymers have a Tg (18-29ºC) that is close to the ambient room temperature, which is far too low when these materials are used as major structural adhesives.

Polyester resins, often selected for structural joins on stone, are known to shrink on setting, they become very brittle over time and are extremely hard compared to the nature of della Robbia's terracotta. Epoxy resins are also very hard and not easy to remove, especially on a porous surface. 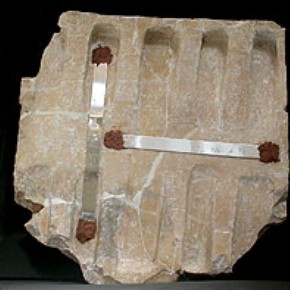 Figure 2. Back view of the coffer: October (7641-1861) after conservation. Photography by Sofia Marques (click image for larger version)

Acrylic resins were considered to fulfil the necessary bonding criteria. After some consideration, Paraloid B44® (methyl methacrylate co-polymer)in various concentrations in acetone was chosen over Paraloid B72® (ethyl methacrylate/methyl acrylate co-polymer) for being more appropriate when bonding heavy fragments together. Paraloid B44 presents good ageing properties, is classified within the medium-hard resins but is still fairly flexible, has a Tg (60ºC) that is 20ºC above that of Paraloid B72, therefore making the potential softening of the resin unlikely. Applied on a surface previously coated with the same material, it ensures a good adhesion. Fumed silica was added to the solution, as many different sources report that up to 0.5% in weight it strengthens the adhesive. Above that percentage, the resin is weakened.

Carbon dowels were used to replace the old steel ones found on some of the joints.
After bonding the fragments together, large gaps in the joints were filled with rolled up acid-free tissue first and then Multi-Purpose Polyfilla (calcium sulphate-based filling material), a map was drawn of each object to determine the weaker points, and bridges made of strips of 2 mm-thick aluminium were fixed onto the back of the objects as an additional preventive measure. Aluminium has the advantage of being easily bent to follow the topography of the back, is light and is a stable metal. Pieces of cotton gauze were fixed to the back of the roundels with Paraloid B44 as a separating layer. An epoxy resin, Araldite SV 427 /HV 427® (tetraethylenepentamine and 4,4 - isopropylidenediphenol and bisphenol A-(epichlororhydrin), respectively) was later applied on top of the gauze on the extremity of each strip. Although some non-desirable properties of this type of resin were mentioned above, it was still selected because it is weaker than others of the same family, it sets very slowly, causing only very little tension to the substrate and is extremely viscous. When used externally on a fairly flat surface with an intermediate layer rather than in between a join, the careful removal of the resin will not cause damage to the substrate.

We hope, with this treatment, to have overcome the difficulties of finding an adequate adhesive that ensures structural stability to these rather damaged large and fairly heavy objects made of soft and porous terracotta. Moreover, this ongoing project has allowed us to look closely at the back of these coffers. For the very first time, observations could be made on the technology used by Luca della Robbia, including the difficulties the artist must have encountered to produce such large pieces. This will be the subject of another article.

I am grateful to Charlotte Hubbard for translating the extracts from Vasari and Filarete.