The first Daily Mail Ideal Home Exhibition was held in 1908 at London's Olympia exhibition centre. Since its inception, many of the leading designers of the twentieth century have been connected with the Exhibition in some way, whether as architects, designers of stands and logos, or inventors of new labour-saving devices and home appliances.

The Archive of Art and Design (AAD) at the Victoria and Albert Museum holds the records of the Daily Mail Ideal Home Exhibition, which were donated to the Museum in 1990. The records date from 1910 and include catalogues, advertising brochures and other ephemera.  There are also 71 photograph albums documenting the exhibitions held annually at Olympia, West London, covering the period 1934 to 1990. These albums contain a wide variety of images relating to the site, the exhibition stands, visiting royalty and celebrities of the day, and large numers of photographs intended for publication in the press. 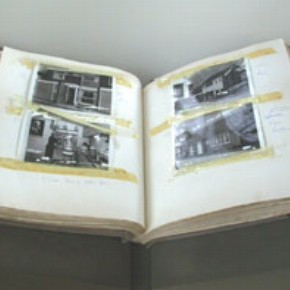 Twenty-one of the albums which cover key years from the 1950s to the 1970s cannot be  accessed by the public or considered for display or loan due to their condition. The problem affecting these particular albums is that photographs had been attached to the leaves with household pressure-sensitive tape. As this tape aged and deteriorated, adhesive had flowed resulting in photographs and opposing leaves becoming stuck together. Previous attempts at opening the albums had caused severe damage by tearing and skinning photographs, and in order to preserve the integrity and order of the volumes they were removed from public access in July 1991.

In March 2005, thanks to a generous donation from the Daily Mail and General Trust plc, a contract was initiated to begin the conservation work necessary to allow these images to be made available for public use and for display and loan where appropriate. All the volumes are post-bindings. The amount of photographs per volume varied enormously, from 342 images in the 1962 volume to over 900 in 1967 and 1968. Formats included a mixture of portrait and landscape of a general size of 120 mm x 170 mm, but there were a large number of 8 x 10 inch prints and a smaller number of square photographs. This diversity needed to be considered when devising a size and type of housing for the collection, particularly if the numerical order and the integrity of the original albums were to be maintained. 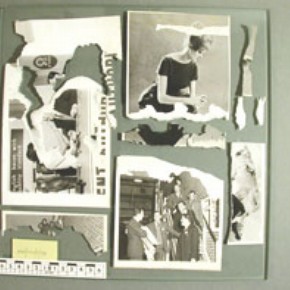 Some protective interleaving had been attempted in the past with tissue paper which in turn had degraded and become adhered to the photographs. Though well-intentioned, this measure exacerbated the problem. The text block pages were severely buckled and distorted due to the presence of so much tape. Adhesives had migrated through the paper sheets; resulting in stains which obscured many of the manuscript captions. The exposed edges of the pages were worn and dirty, and the corners were creased, folded and torn. The leaves themselves were of poor quality, and incompatible with the photographs attached to them, particularly as they tended to flex and crack in the gutter as pages were turned. The tape and adhesive would have continued to cause problems to the emulsion surfaces if it was not removed. It was essential, therefore, that the albums were dismantled and the photographs re-housed using safe and appropriate materials.


Individual leaves were separated with the aid of a Teflon® spatula and interleaved with silicone release paper to prevent any further adhesion and damage whilst work progressed. Information such as photograph number, typed and manuscript captions, size of photograph, and format (whether landscape or portrait) were recorded at this time and subsequently proved an efficient means of gathering information on how much new housing material would be needed. This also ensured that the order and chronology of the photographs could be maintained during dismantling and treatment. It was established that there were over 12,000 problematic prints to be dealt with. For the most part, it was possible to remove the tape carrier mechanically without the use of solvents. The adhesive layer, which was still extremely sticky, remained on the prints and had to be removed prior to re-housing. 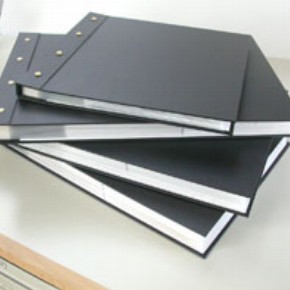 Due to the sheer amount of material and the scale of damage, it was necessary to produce stable, robust and aesthetically pleasing housing at the lowest practicable cost in time and materials. The practical work was broken into modules and made as routine as possible.  After measurement of the images an optimum size of album was decided upon, which took into account the weight and the need for ease of handling. Polyester pockets were customised to hold eight, six or four prints each depending on their orientation. An unbuffered paper was placed within each pocket and behind each photograph both for aesthetic reasons and to act as a physical support. It also allowed the inclusion of captions and inscriptions to be printed on both sides of the sheets, thereby further reducing the bulk and weight of the albums. The size of the pockets also needed to be wide enough at the bound edge to facilitate comfortable opening of the albums. The sleeves were then gathered together in a post-binding. To avoid excessive weight, it was sometimes necessary to split yearly albums into two or three volumes before individually phase-boxing them.

This method of housing has proved to be an effective storage system that offers long-term protection whilst also ensuring easy access. With the increased availability of the archive, a planned webpage on the V&A's website and the centenary of the Daily Mail Ideal Home Exhibition in 2008, it is envisaged that this unique collection will generate further interest in the cultural, social and design history of the twentieth century.

Funding for the conservation of this material has been made possible with a generous grant from the Daily Mail & General Trust plc.